It’s been a while since I started chatting about the honeymoon – predictably I am awful at keeping up with series. Sorry pals, but now it’s time to talk about LA, the second stop on our road trip.

Before I go any further (‘do you love me, will you love me foreverrrr’), let me just say that LA was nothing at all how I had imagined it. I was thinking there would be a lot more glitz and glamour, but if there was any, we didn’t find it. Someone else explained it well when they said that in most places, like New York, or Amsterdam, or Paris, you know when you’ve made it to like the ‘main place’. You’re like ‘ah! Here I am, in NYC/Amsterdam/Paris’, but you never get that in LA. It’s weird.

We stayed for a week at Knott’s Berry Farm which is sort of the equivalent of Drayton Manor. The hotel of a kid-centric theme park, which wasn’t exactly the coolest place we stayed, but one night we did get to enjoy dinner with Snoopy so, swings and roundabouts! I wouldn’t necessary recommend it but really it was somewhere for us to stay in between real adventures so it was fine. 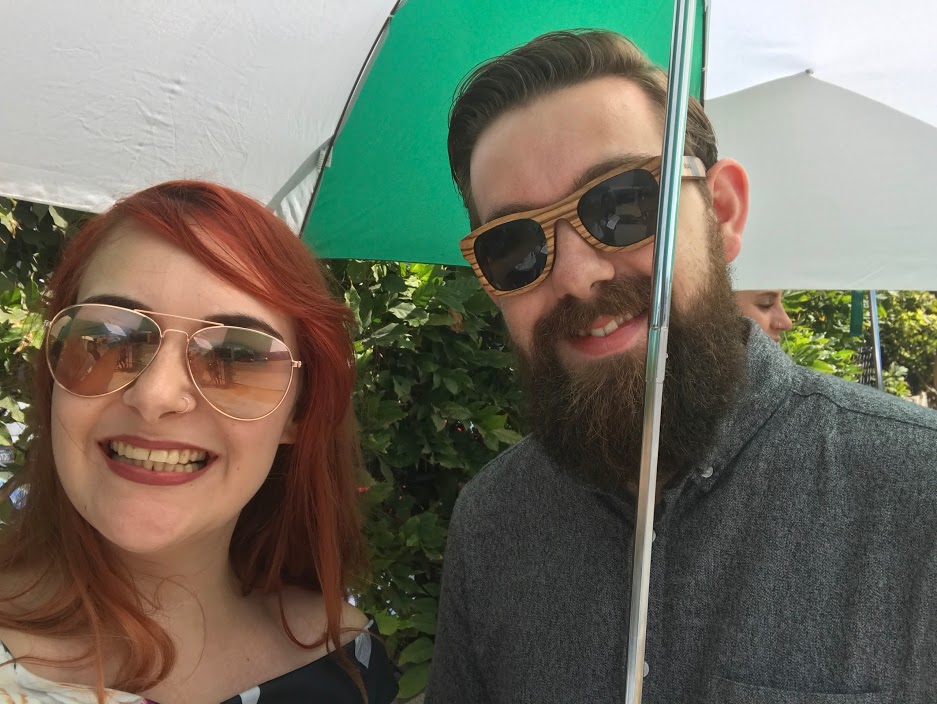 Two overdressed beans hiding under an umbrella from the insane heat!

One thing I would really recommend is finding a TV show taping. They are free and a lot of fun. Do be warned that they take most of the day, but we really enjoyed it. We went to see Jame Cordon’s Late Late Show and someone had told us to properly dress up because then they put you at the front, and that’s exactly what they did. We were at the CBS studios which was cool in itself but James Cordon wasn’t as much fun as you would think. 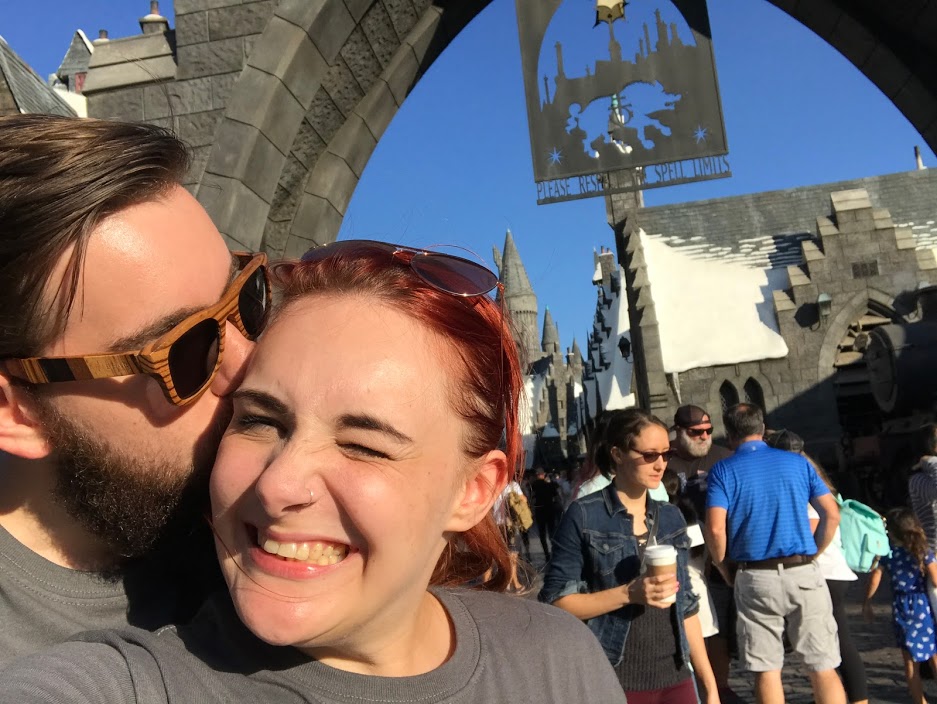 I’ve never been to Universal but Steven’s been to the one in Florida a few times so he was able to say that it felt smaller than Florida. It was super fun though! We both love rollercoasters but bloody hell was there a lot of walking. As it was technically out of season, we didn’t have to spend much time queueing and the Wizarding World of Harry Potter was a real highlight – we rode the Forbidden Journey twice and it was incredible. Weirdly, most of the rides are like 4D screen things, but they were a lot of fun. The only thing I wasn’t thrilled with was the Ollivander’s Wand Shop. It was the longest queue and it was basically just an elaborate way of selling overpriced wands. We were given ‘Just Married’ badges which we loved, and every single member of staff that saw us congratulated us which was a really sweet touch. I could go more into detail about the Universal Hollywood experience if you want (including the insane price of bloody parking!), just let me know in the comments if you’re down for that. 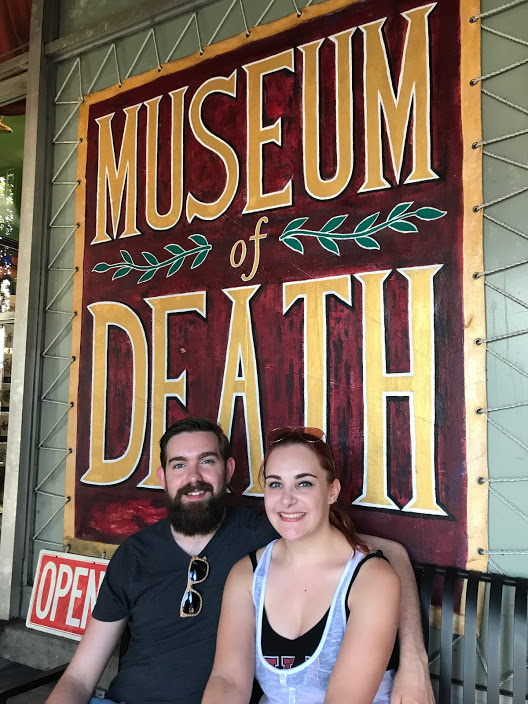 Okay, I’m aware that this is a weird one but it was super interesting. It’s quite a small museum which is a little cramped but it’s full to the brim of weird and wonderful things. If you’re into murderers, there are whole rooms dedicated to it. Some bits were a little much to me, but I could appreciate the art and it was a unique, interesting way to spend a day. 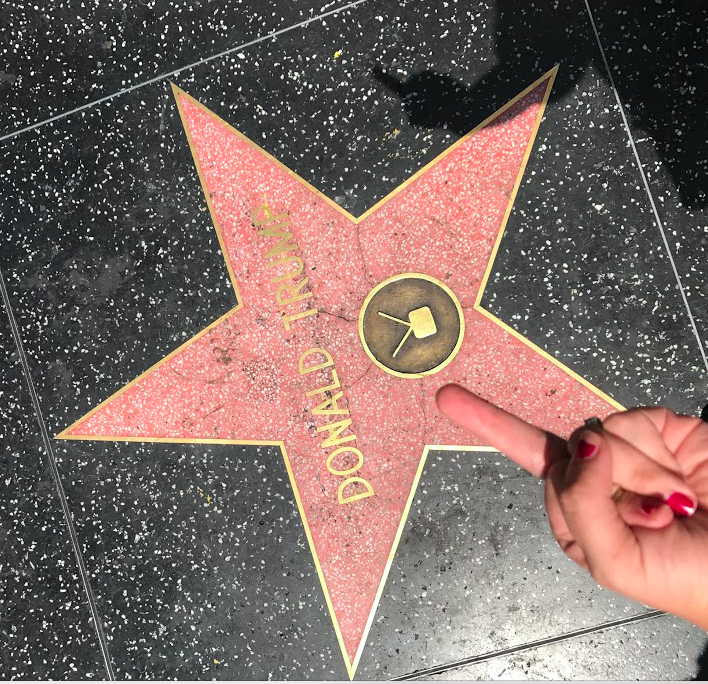 You can’t go to LA without walking down the Walk of Fame. I was surprised at just how long it was, and I recognised maybe 25% of the names, but when we did find exciting ones we knew, there was a bit of a thrill. I will say though, the second you look up from the stars, you’ll notice that the area just isn’t that nice. There certainly isn’t the level of glitz and glamour that we are led to believe. I very much enjoyed flipping off Trump’s star and getting excited when I spotted Amy Poehler, but I’m not sure the rest of it lived up to it. 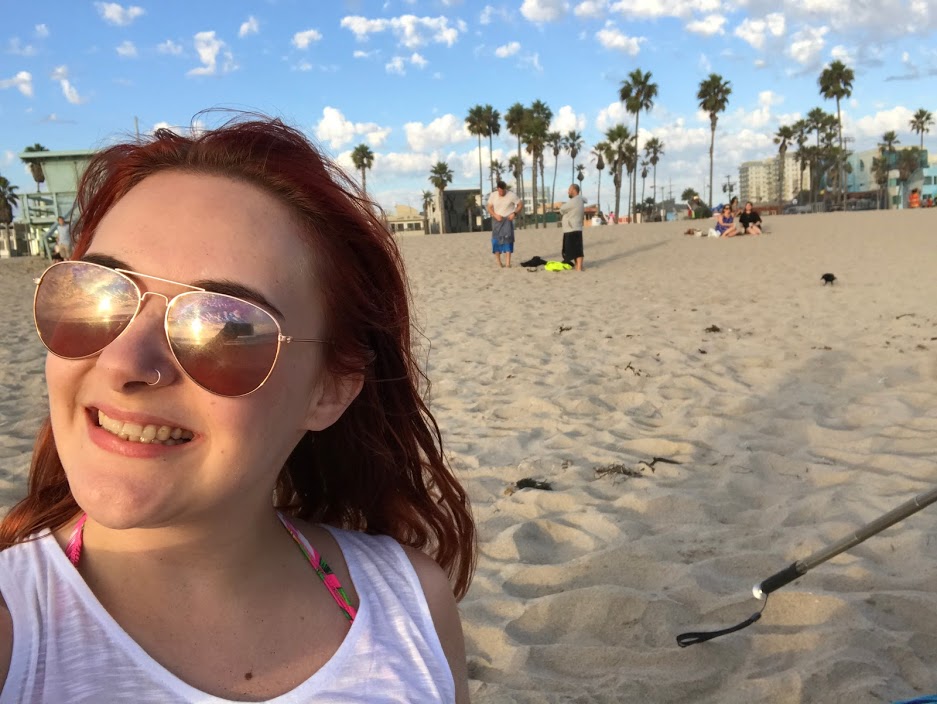 Full disclosure, I was revoltingly hungover when we headed to Malibu beach. As in, vomiting-in-a-giant-bag-of-Cheetos hungover. That said, if there is anywhere you want to spend time hungover, Malibu is not a bad shout. It is absolutely beautiful! There isn’t a lot going on on the front, as you might expect elsewhere, such as bars, or food huts, but it is a little spot of paradise. 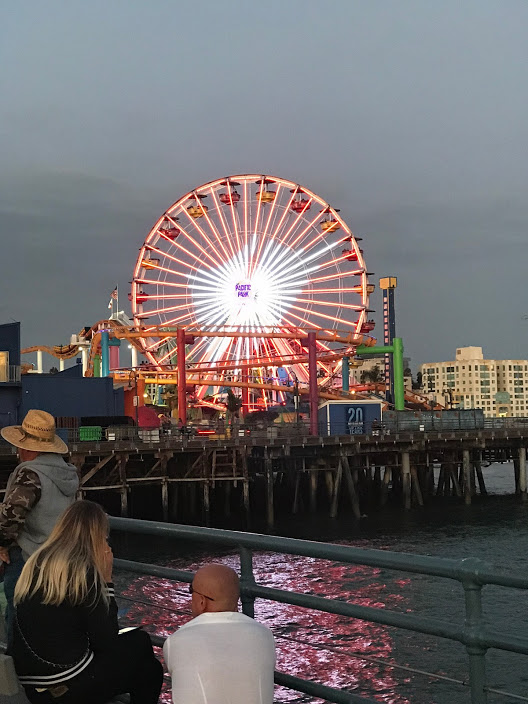 This first time we tried to visit the pier, we couldn’t even get on it because of a bomb scare, but I’m so glad we went back because it was one of my favourite places, especially around sunset. The pier is a collection of light, colour and movement. There were artists and little quirky stalls and a guy playing drums with his pal playing violin and the sun was setting and I felt infinite. I wish we were able to go there every night as it is just the best, most magical place to see the sun set. This is my top LA pick! 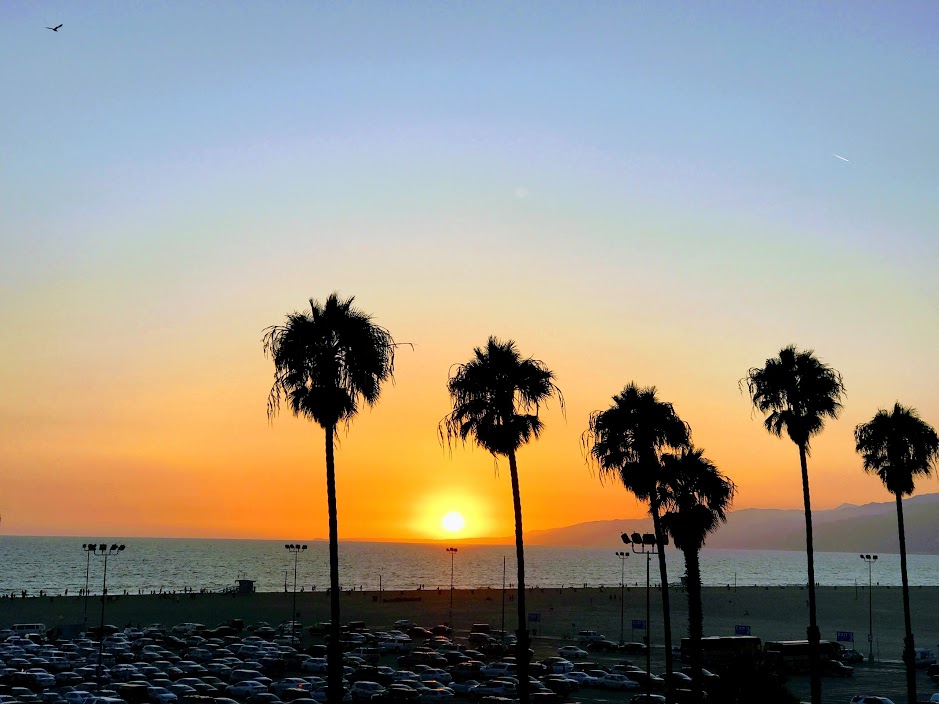 Venice Beach is the home to the super cool and a butt load of palm trees. It markets itself towards artists and bohemians and it really is amazing. I wish we’d have known to explore more than just the beach itself as there are loads of things going on just off the sand. 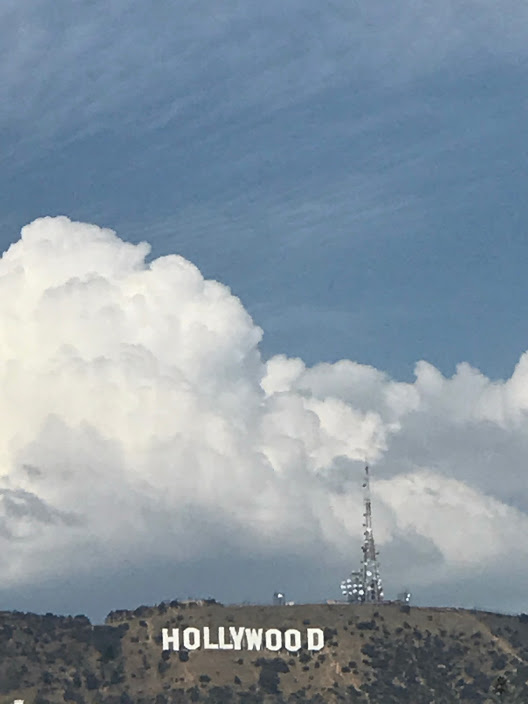 The most iconic part of Hollywood but honestly, unless you want to hike (and your girl here does not, especially in the middle of a well-timed Fibro flare-up) you can’t see it well at all. I spotted it while crossing the road one time and it just didn’t seem appropriate to stop and take pictures… It’s just quite far away. It’s cool to see, don’t get me wrong, but I struggled to get an Insta-worthy shot of it. 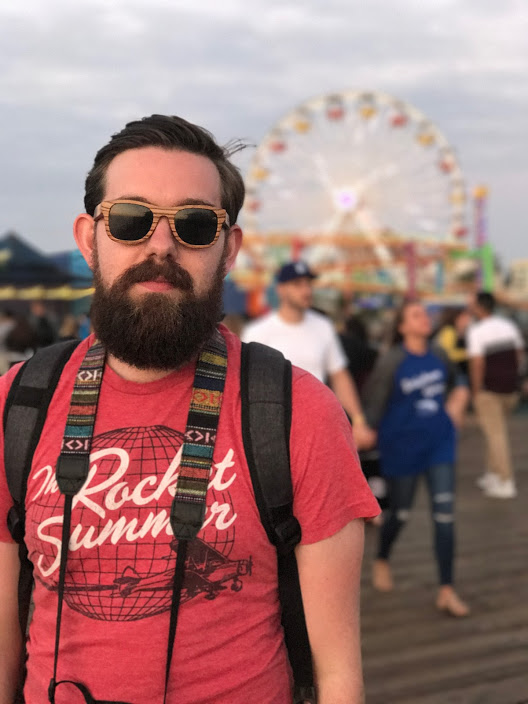 Before we flew out, Steven did some research and found that there was a whole load of cheap and free parking in abundance so we felt pretty good about that. Well, I can confirm that we did not find any, whatsoever. Where was that cheap parking?! This was an added expense that we didn’t need to spend but having a car is a huge convenience and I don’t know how we would have done it without it.

Also, we were in LA for a whole week and I was not discovered – what is that about?!

All that said, you should check out Allie’s posts about LA and San Fran as she had the completely opposite experience (and also she’s super cool!). So this just shows how subjective blogs can be – read both for a balanced approach.

We’ve also got so much video footage that we recorded across the two weeks so hopefully I will eventually get that edited for you… Watch this space! 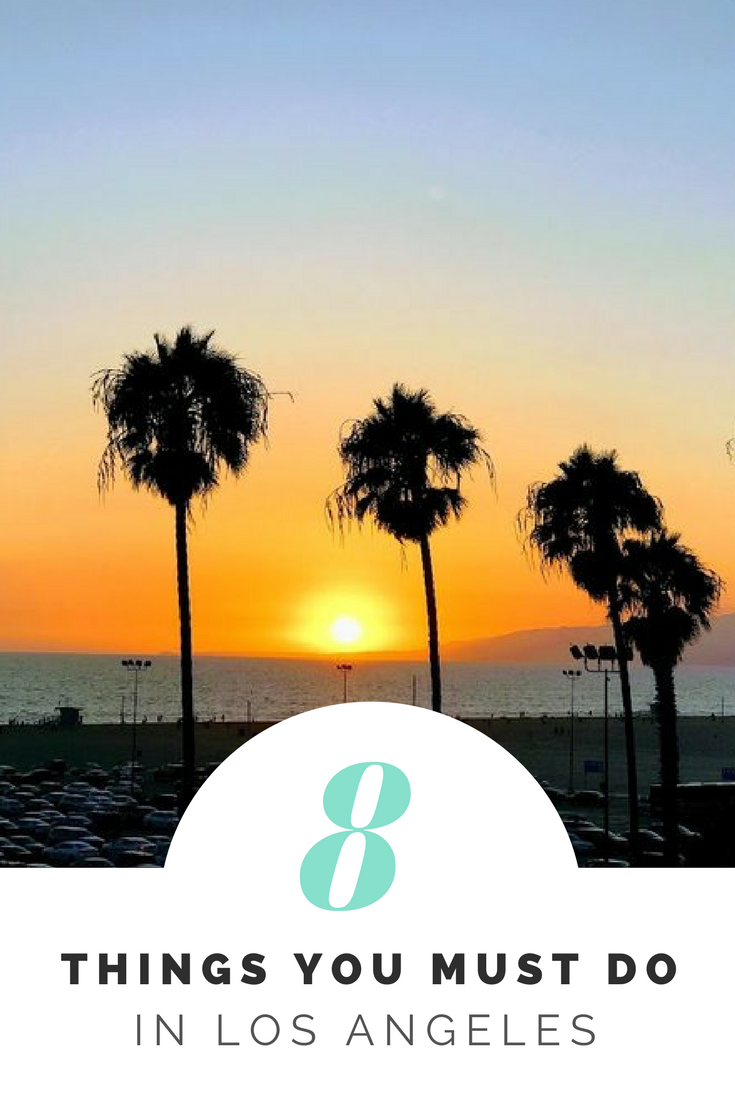