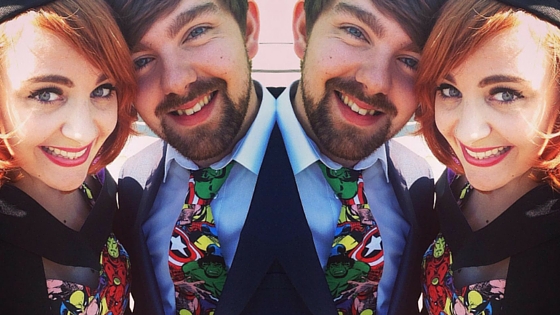 Being engaged to the love of my life is pretty cool. Don’t get me wrong, this announcement is very often met with a look of disbelief – why on earth would someone want to marry you, you giant dork?! Honestly, I have no idea.

There’s only really one struggle that comes with being a fiancée (aside from having to remember which one has both ées and where the accent goes… Thank you autocorrect!) and that is working out what to refer to your betrothed as.

Before The Engagement, Steven was, as these things go, my boyfriend. “Boyfriend” (or, The Boyf as he sometimes went by) is a pretty simple label, everyone knows where they stand etc etc. That said, I always felt a bit like a 14 year old using that term. I feel the same when “proper grown ups”, perhaps after a divorce or relationship breakdown, refer to 45 year old, balding divorcee Kev as their boyfriend. It just feels weird to me and a term that really should be reserved for my little sister and her friends.

So surely, now, Steven is my “fiancé” and there’s no need to even be writing this right? Well, for some reason, I don’t think that sounds right either. If anything it makes me sound like one of those annoying “I’m getting married dontchaknow” people that you deleted on Facebook for that exact reason. It’s like I’m desperate to point out that someone, however misguidedly wants to put a ring on it.

There’s also the issue of pronunciation (fionSAY or fiONsay”) that would have Hermione Granger biting my head off.

So what are our other options? I always feel like “Partner” has a pretty great message behind it – like Steven and I are a team in Cat feeding, bill paying and take-out ordering. However, I only ever hear people using that term when describing a partner of the same gender. Not that I mind if people assume this of me but Steven is quite fond of his male-ness. (As am I!).

Other-half is a cute one. Especially if you believe in SoulM8z an’ that. It’s probably the one I use the most but it still sounds weird coming out of my mouth.

Then of course, you have the slightly more colloquial (cringey) terms.

I’m certainly not “cool” enough to call Steven my “fella”. Perhaps it’s my Southern accent, or my lack of street cred, but I just can’t pull it off.

Thankfully, Steven doesn’t use the feminine equal “bird”, because I’m afraid that might be a deal breaker. As I explained in this vlog, it’s a word I hate. It’s not romantic, or affectionate or in any way attractive. I am not a feathered being, I am a Codie.

Steven isn’t a big fan of “Missus”, (which is a good thing because I’m not sure I’m a fan either!), and it does seem like a bit of an odd one. Particularly if you’re not married…

On the same vein, is “hubby”. Again, in my Words I Hate video I go into detail about this word, but I feel it’s important to mention. Shortening it to “Hubs” is even worse. Like, want to stick a knife in my ears kinda bad. That said, sometimes I do use it as a “hilarious” bit of irony, and it’s beginning to stick a little…

I’ve still got over a year to fill before the wedding, so if you’ve got any suggestions, let me know in the comments!