Okay, let me kick this off by saying that I did not see a single Elvis the whole time we were in Vegas and I am salty AF about that. Also, we really wanted to get married (or at least have a vow renewal or something fun) while we were there, because how cool would it be to say you got married in Vegas, but that is pricey beans! I don’t see how people can “accidentally” get married on a whim in Vegas. For a start a legal ceremony needs a certificate from the Town Hall or whatever, and even the cheapest symbolic ceremonies are still around $100. Sigh.

We also had a few weather issues that made some of the things we wanted to do impossible. Yep, we happened to be in Vegas on one of the only days it rained. For context, it rains less than a week every year… haha! So we didn’t get to do Fremont Street, the Zipline, the rides on top of the Stratosphere, the NYNY roller coaster or the obligatory Las Vegas sign photo op. So we’re already planning on coming back!

But on to the stuff that we did do!

There is nowhere else in the world, at least that I know of, where the main attraction is other hotels. It’s bizarre but also totally awesome. Whether you’re eating, shopping, gambling or riding a freaking gondola – you’re inside someone’s hotel and that’s as cool as it is weird!

It goes without saying that you need to explore all of the hotels, just to enjoy looking at them. Like I said previously, some of the theming is amazing and worth a mooch around, whereas some of the others have attractions in that we specifically enjoyed. 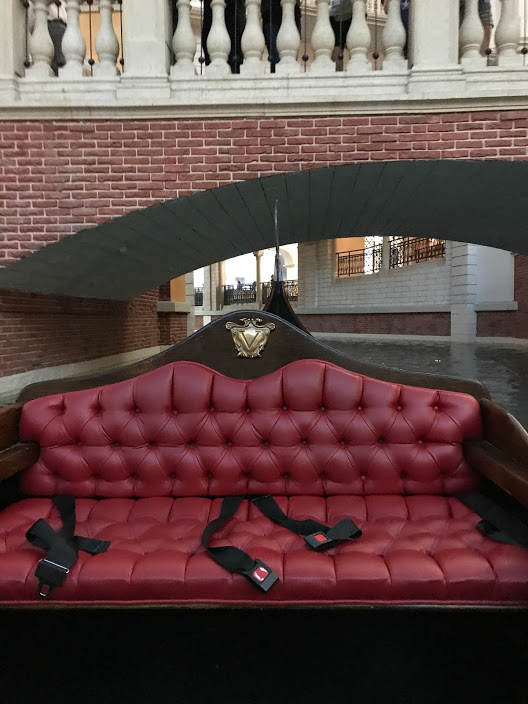 Ride a gondola at the Venetian

This was our first taste of the craziness that is Vegas and we couldn’t have wished for better! As you can probably gather, the Venetian is a mini Venice and you have the choice of staying outside, or inside for your gondola ride. We decided to go inside, because it looked like actual Venice, with a painted, super realistic sky but it was in a mall.  and that was just too much for us. So we paid our $29 each (pro tip: it was $116 if you wanted a gonolda to yourself but we are cheap skates and don’t mind making new pals to save pennies so we went for the cheaper option where you are paired up with another couple, however because it was quiet we all got our own gondolas anyway so that was pretty sweet!), and jumped (carefully!) into a gondola. The ride is pretty long and you go under various bridges, which are apparently good luck to kiss underneath. Our punter (is that their names? The woman with the oar anyway) chatted away and gave us her top Vegas tips and then sang us some songs. The first was in Italian and the second was from Lady and the Tramp so it was kinda magical. Honestly, she mentioned us tipping her quite a lot – we would have tipped her anyway but it made it a little awkward. Otherwise it was really special. People are eating, or just watching as you float on by and according to our host it’s almost exactly like Venice but less smelly. So that’s cool! 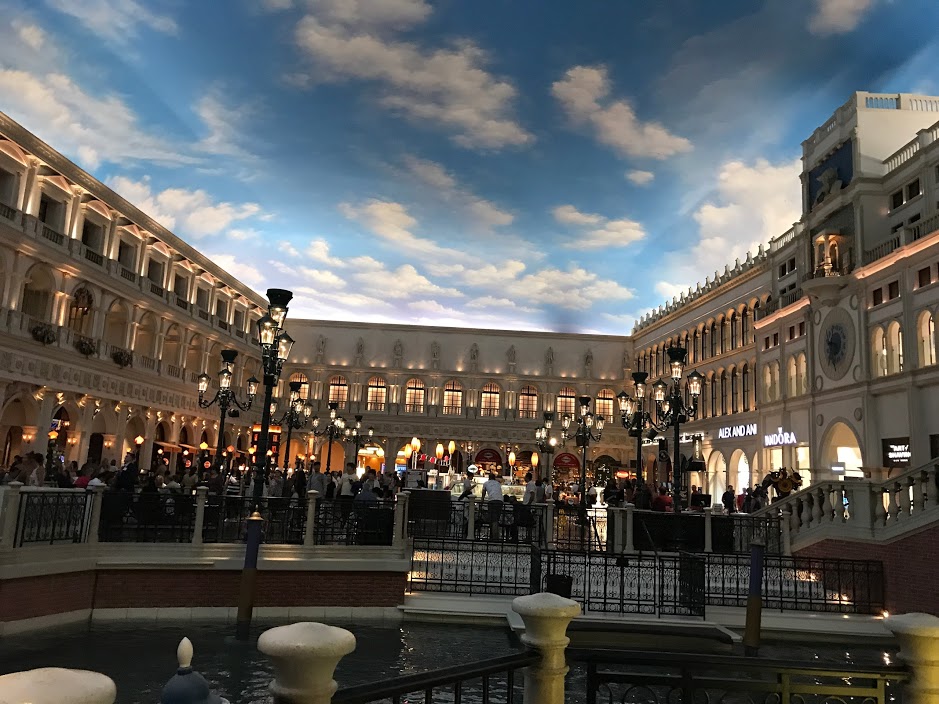 Can you even believe that this is inside?!

You can’t fathom how cool this is unless you actually experience it. The fountains “dance” in time to different songs and it’s always a different song so you should check it out a few times. It happens every half an hour after like 3pm and we stood on the opposite side to everyone else, closer to the actual hotel and had an amazing view without anyone else so that was great. There is also a bus stop opposite the fountains so we caught the tail end a few times while waiting for the bus which was lovely. We were told to try and time it with going up the Eiffel Tower at night, however when we went to go up the first time, it was closed because of the storm (only us, eh?!) so when it was open again the next day we didn’t want to risk it closing again. I bet it is amazing though! 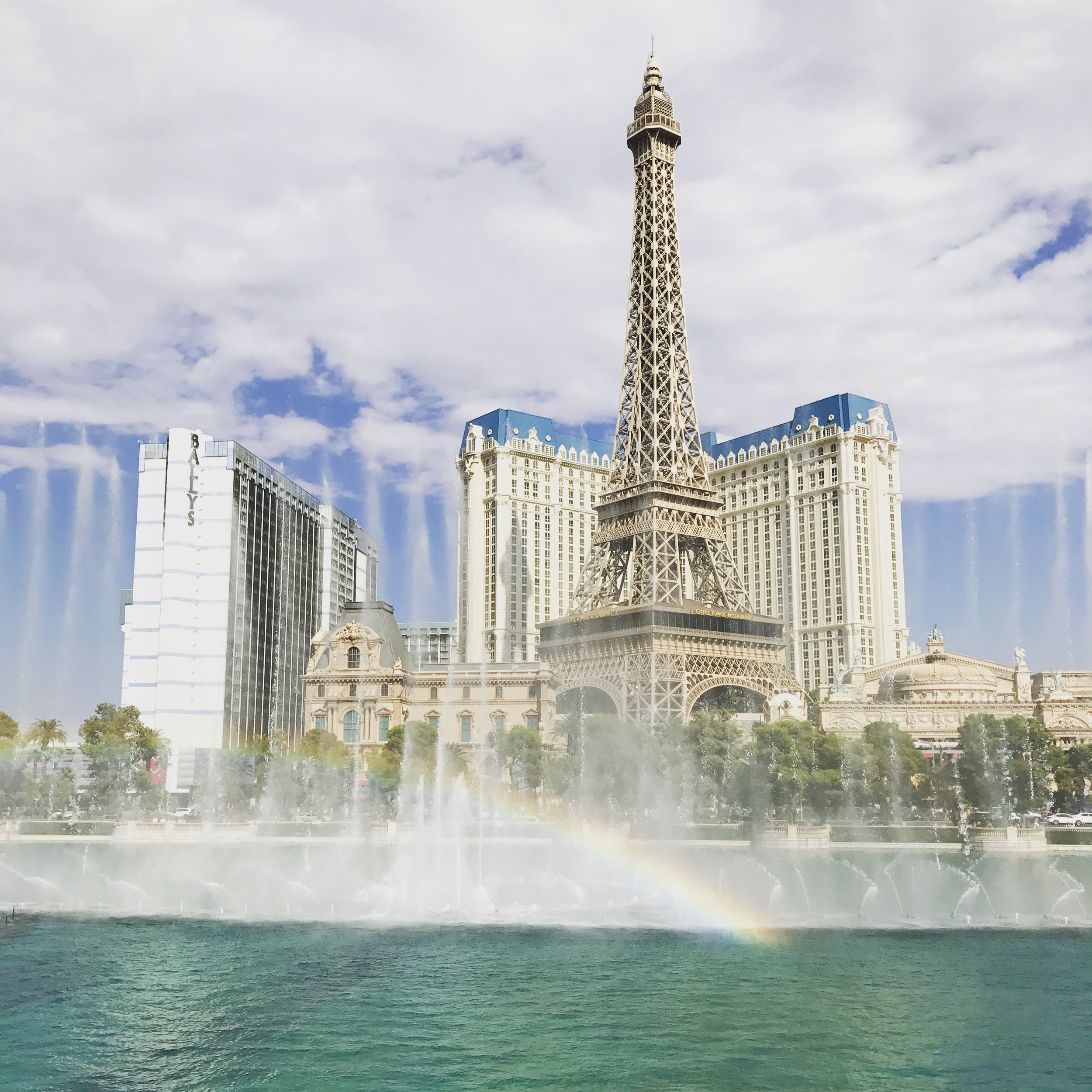 Yep. An actual replica (half the size in fact) of the Eiffel Tower that you can go up. The hotel is beautifully themed and you can have a meal in the Eiffel Tower restaurant but we were on a budget so we settled for just going up in the lift. It cost ____ because it was day time and we could see for miles. The lift ride feels like it takes forever and I was a little anxious but being up there was super cool. There are little gaps in the fencing for cameras so you can take unobstructed pictures which was clever. It’s amazing how far you can see and we were lucky because it wasn’t very busy up there when we went so we could really take our time.

Recreational marijuana is legal in Vegas and so we thought we’d check out an actual dispensary. We went to one at the end of the strip which looked a little intimidating from outside, but inside was actually pretty nice. At the front desk, like a Doctor’s waiting room you fill in forms to explain who you are, and if you want any more than an ounce you have to fill out a different form. Inside there is security, but it’s bright and clean and kinda looks a little like an Apple Genuis Bar but like, with drugs. The people behind the counters are friendly and knowledgeable and explain everything to you but without being condescending. If this is your jam, I’d recommend giving it a try – if it’s good enough for Mariah Carey it’s good enough for you. 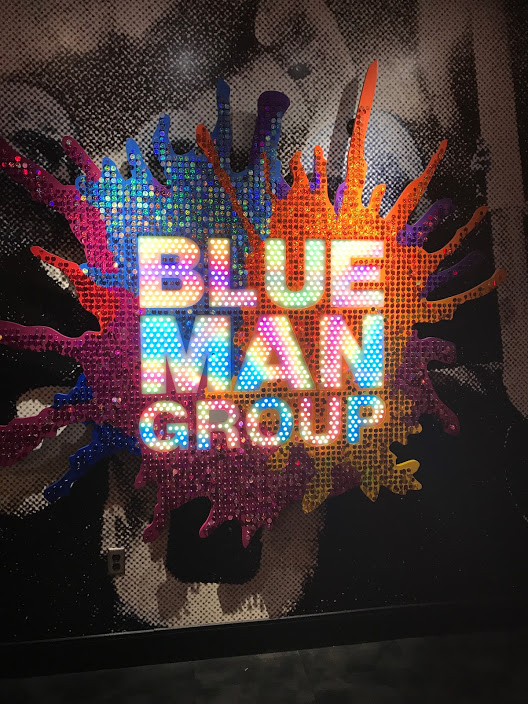 If you come to Vegas and don’t watch a show, then my friend, you are a mess. There are shows for everyone in Vegas, from sexy burlesque, to famous crooners, incredible magicians and even 90’s boybands (Boys II Men were there when we were!). We were torn between the Blue Man Group and Cirque Du Soleil but the Blue Man Group won out and honestly, it was one of the most incredible things I’ve ever seen. Excitingly, it was in the Luxor, so we got to check out the hotel that almost was, and it really is a pretty cool place! The show itself is indescribable. Before it starts you’re all given florescent crepe paper and told to decorate yourselves with it. It’s pretty magical to look around and see 100s of people with colourful masks, headbands and bows! The show is a mix of audiences participation, mess, colour and drumming and it’s really bloody cool! If you ever get a chance to see it, I would recommend it – we both absolutely loved it! 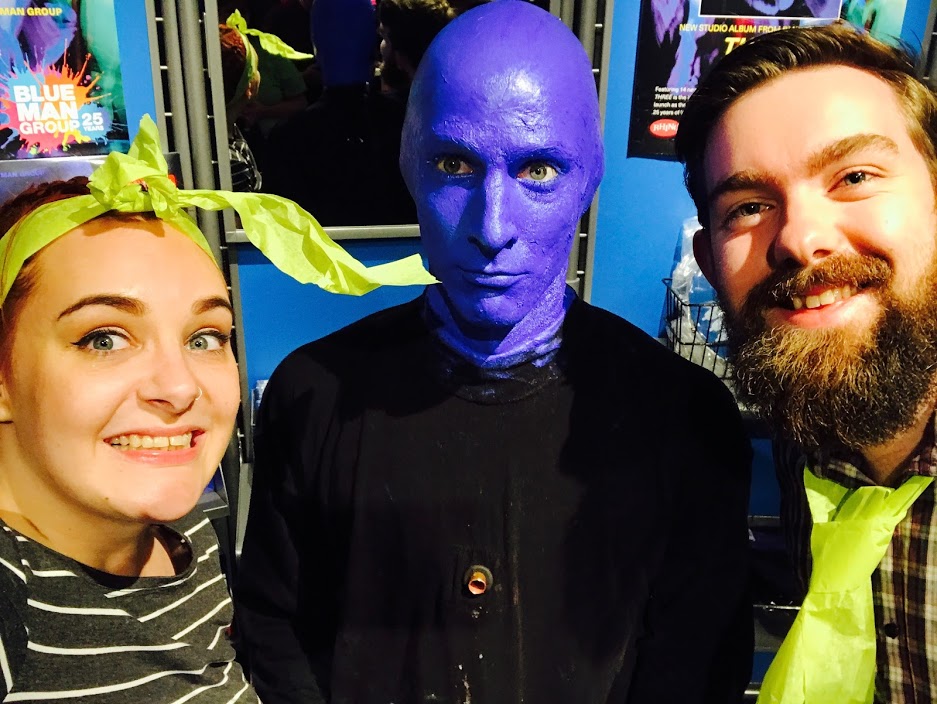 This is where the retired neon signs from the strip go to die and it’s as cool as it sounds! It’s a little bit past the actual strip so we took a bus to get there and had to cross some horrifically busy roads (it took so long for the lights to change that we thought they were broken!) which is difficult when it’s hot as hell, but the journey isn’t too bad. You also pass a few 711 stores which are much cheaper than buying snacks on the strip. Anyway, I digress. The we got there, we were told that you actually have to go round as part of a tour and they didn’t have any slots that day, however, they did let us look at a few of the signs on our own and we could peer down the alleyways but they were blocked off. This was kinda disappointing as we’d travelled a fair while for it, but we didn’t have to pay, so I guess it’s swings are roundabouts. Doing a proper tour would be really cool because there is likely to be some pretty crazy stories behind these signs, we I would recommend booking a tour if you can. 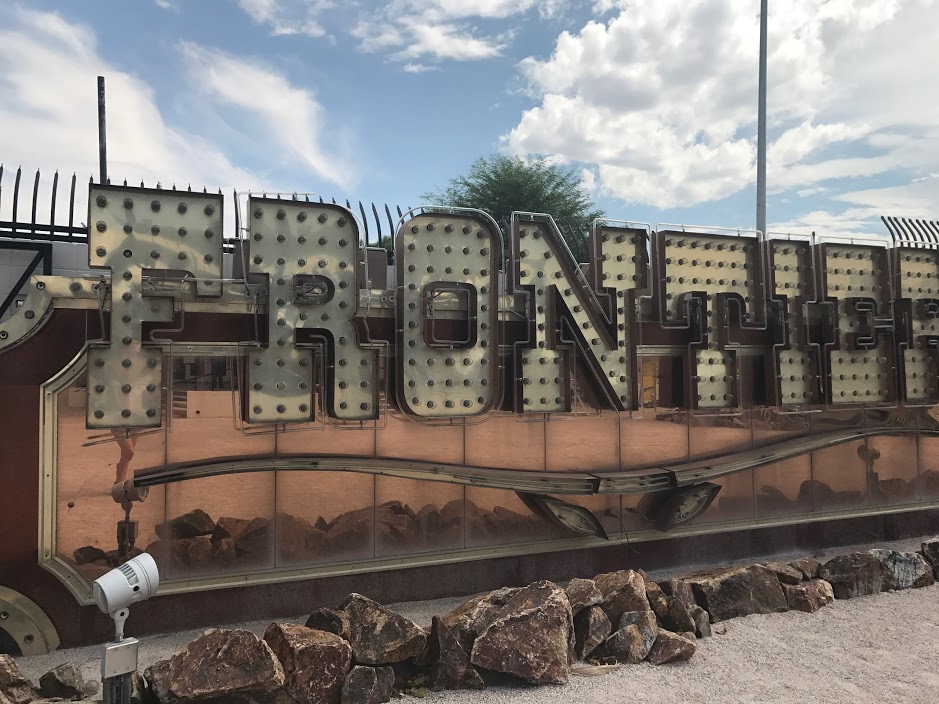 We both genuinely thought that the gambling would be a much bigger thing than it actually is. Don’t get me wrong, there is a casino in every hotel and you tend to walk past or through them, but its a lot more chilled than I thought and there is so much more to it than that. There was a game in our hotel that was a large vertical wheel with different numbers on (the same concept as roulette but a bit more like an arcade game) and we had a little play on that as it didn’t seem quite so scary. I turned $2 into $25 in just three spins but then Steven cashed me out because he is a cautious bean. Later, so that we could say we had played on a proper table, we played Roulette, however it was $15 minimum and you had to go all in. We lost it on the first go, but it was more about the experience.

It used to be that if you were playing any game you would get free drinks but that’s not the case anymore. In some casinos a light will show on your machine if you’ve put in a certain amount and you might get a drink from that, but otherwise you’ve got to pay sadly. If that wasn’t the case, we probably would have played a few slot games for some drinks.

The range of slot games are insane. They are mostly the same but themed differently. The themes can be anything from TV shows to singers and beyond – it’s how they appeal to you. People will be playing them any time if the day or night which is odd to see.

In terms of table games, a lot of casinos were doing scheduled lessons throughout the day so you could learnt play Blackjack or whatever without the pressure of being in a live game. This was a great idea, but we had so much other stuff to be doing that we gave it a miss. 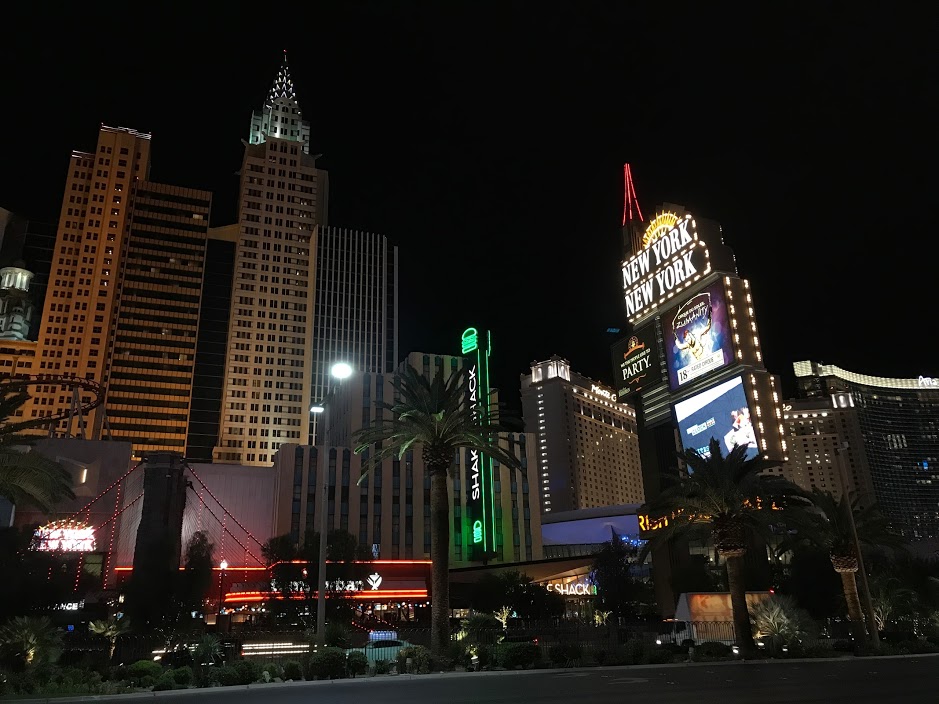 There us nothing better to do than simply explore the strip. Whether you are walking between hotels, or jumping on the bus (we got a three day ticket that was $20 each and was more than worth it!), there is so much to see. Vegas is so much cleaner and nicer than you would imagine and it’s the place on our trip that I felt the safest which I was surprised about. I was happy enough walking about at night as it’s well-lit on the strip and there are cameras everywhere in the casinos. Nosing in the hotels is an absolute must-do – the photo ops are endless! We loved the indoor rainstorm at Planet Hollywood, and the intricate detail of Caesars Palace. There are exotic gardens, giant sculptures, art installations, aquariums and zoos in the various hotels, and none of them are boring. 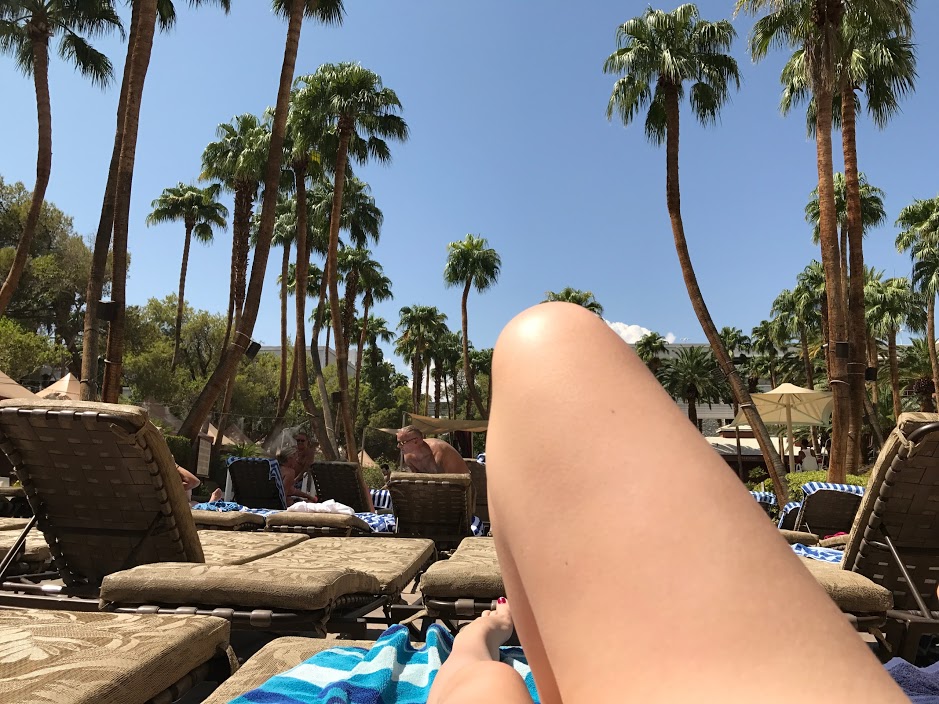 This barely scratches the surface on what Vegas has to offer. The shopping, the bars, the entertainment – you could spend a month and only just see everything. I think we managed a lot in the four days we were there – especially as it was raining for two of the days and one of them we were travelling! We already can’t wait to go back and tick off some of the other things we missed.

In the next blog we’ll talk about food in Vegas on a budget so watch out for that!

Have you been to Vegas? What did we miss? 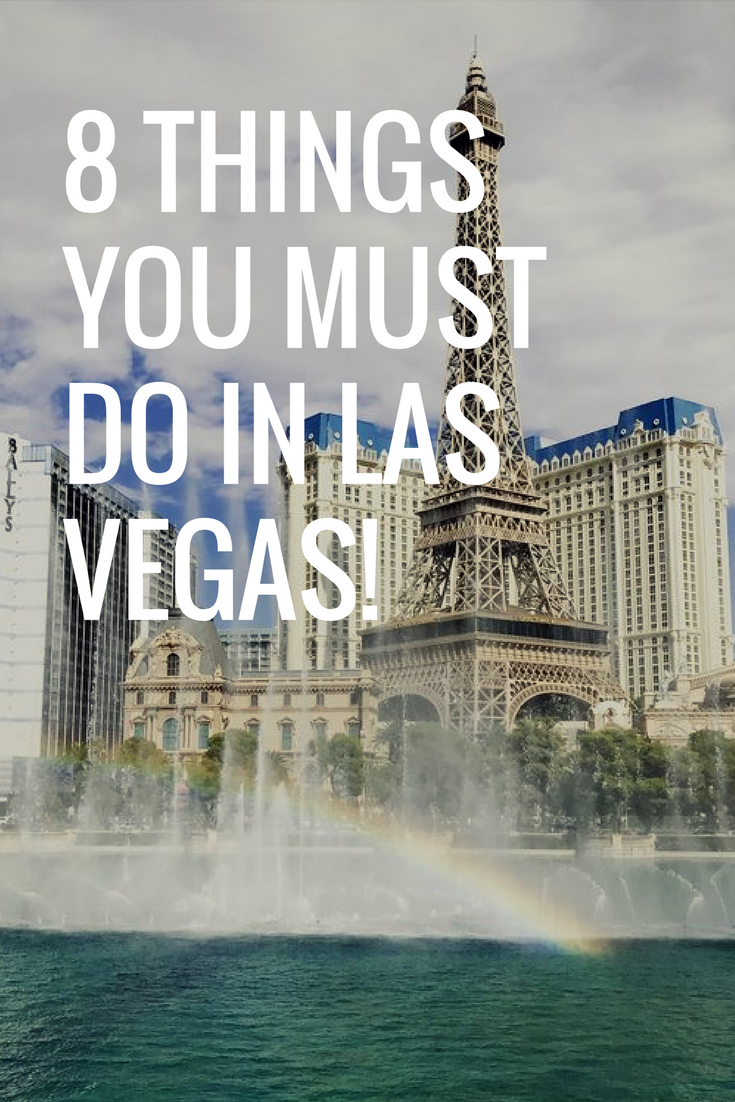