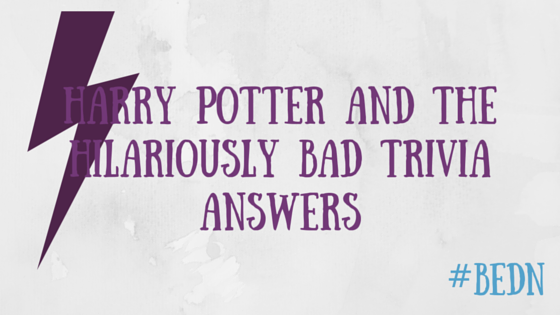 So today’s blog post is a little late, but the reason for this, happens to be the inspiration for the post, and it will (hopefully) be up before midnight so I’m still claiming #BEDN!
This evening was our good friend Dan’s birthday so Steven and I met up with him and his lovely wife Chloe for a meal. As these things usually do, a meal turned into ‘just one game of Mario Kart’ and when I lost, horrifically, (because I’m a SNES girl myself), into ‘just a few questions’ of Harry Potter Trivial Pursuit.

I should preface this by saying that Chloe and myself are HUGE Harry Potter fans and Steven & Dan have very limited knowledge, mostly from the films (and only really by proxy). We decided to play in couple teams, but let the boys try to answer the questions first, before we told them the proper answers.

Here are a few of the most hilarious answers:

Q: What wrist movement accompanies Wingardiam Leviosa?
Dan: (Very confidently and with much flourish) A flick and a Whip!

Q: What does Professor Trelawny teach?
(I whisper “Divination” to Steven)
Steven: Division!

Because apparently a whole class dedicated to just division, in a school that teaches only magic, makes so much sense…

I believe he meant the Elder Wand.

My favourite pun of the night came from myself actually.
Me: No, Dumbledore died, he was as dead as a Dumble-door knob.

If you’re not a Harry Potter fan, this might not make sense, but the whole night was a lot of laughing with two wonderful friends and our quick visit ended with us leaving at 11pm. We live an hour and a half away.