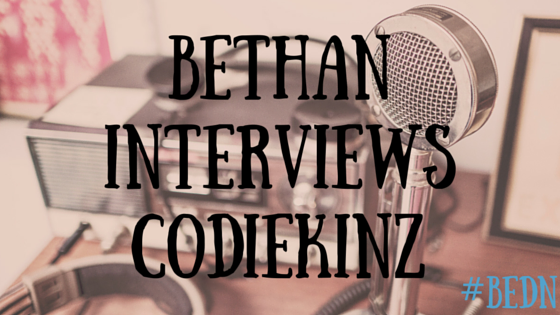 A few weeks ago, I text Bethan in distress at the thought that I will (probably) never be interviewed by Grace Helbig on Not Too Deep. Bethan, being the Grade A babe that she is, offered to interview me herself and write it up all official, like. I’ve been saving publishing it, until such a day that my brain is too fuzzy to work, and today, my friends, is that day. So once again, a giant thank you to Bethan for writing stuff for me. Follow her on Twitter @Beyfbaby.

Codie Louise Austin is a 24 year old (Ed: Nope, 23. Holding on for anther 2 weeks!) blogger and vlogger, currently based in Southport and working as a Digital Market Hero in Manchester. I catch up with her, fresh from the Liverpool Blog event. She’s a relatively fresh face on the social media scene, but she’s already amassed over a thousand followers on twitter. Austin currently participating in Blog Every Day in November (#BEDN) and it’s a pretty time consuming activity. But luckily for me, we make time for a low key chat – so low key the lass is in Harry Potter PJ’s.

Does your name mean anything? Was it picked for any special reason?
c- So my name was from either Home & Away or Neighbours (I can’t remember!) but I think she died from drinking a can of drink with a wasp in it whilst she was playing volleyball. Stress. So yeah, I was gonna be Codie or Nico depending on what I came out as, and apparently my Dad was like “it’s a Codie!” So yeah, that’s my name.
b- I love that you’re mam was like, yeah, wasp death. That’s the one!
c- I think she died after I was born because I THINK I remember watching it.
b- Oh lord, bet that was traumatic.
c- That’s why I no longer play volleyball.
If you could grow an extra limb, what would you grow and where would you grow it?
c- Is a penis a limb? Cos if so, a penis.
b- That is not a limb, I’m almost 100% sure.
c-I guess that’s more of an appendage? I think an extra arm in the middle of my chest, or on my hip so I could multitask better.
b- Chest might be a bit impractical clothing wise.
c- I’d just cut a hole in my clothes.

Do you have a weird thing that freaks you out?
b- So like mine’s dr seuss illustrations.
c- How random. I used to be creeped out by nail varnish, I was worried it would chip off into my cereal. Now I’m kinda squeamish about knee caps and latex gloves make me gag.
b- Like how they move about?
c- Ugh. Yep! I, worried it’ll dislocate or bend backwards.
b- Yes I feel that.

Pizza or pasta?
c- Oh man! I went through a phase where I ate pizza like every day, but then I got sick of it… still, probably pizza I think.
b- What an excellent phase.
c-I’ve had worse!
b- Like?
c- My going out and getting wasted phase was pretty bad.
b- I think most people have that phase.
c- Even you?
b- it was only about 6 months but it was a time.
c- Please elaborate…
b- It was just the beginning of uni but then I got my vomit phobia back and I knocked it on the head.
c- Oh man that’s understandable.
b- I went out when I was ill and I vommed outside for the first time in my life and at that point I was just over it.
c- Ugh. I don’t think I’ve ever vommed outside but I threw up in Alpine(1) on my 21st
b- On the dance floor?
c- In the corner but yeah I hated myself.
b- My old house mate did it in the middle of the floor in Ruby Skies(2) .
c- Classy. I’ve thrown up in a taxi and a friend’s car. I end up feeling awful in every way, I don’t like getting drunk anymore.

If you could only use one make up brand for the rest of your life what would you pick? The catch is you still have to pay for it.
c- If I have to pay for it maybe something basic like Rimmel.  Or maybe Benefit cos they do everything and I already have some of it – enough to do a full face so I don’t have to buy anything for a while.
b- What do you use from Benefit?
c- Foundation, mascara, blusher, primer, concealer, eyeshadow and highlighter.
b-  I was going to say do you stick with brands, but apparently yes.
c- I don’t really but I just happen to have bought a gift set from them and a few little bits.

If you could live in a town like The Nightmare Before Christmas, what town would you live in?
c- I would live in the Christmas one. Obvs.

What would your superhero outfit look like?
c- Practical! & colourful! A cape attached with Velcro in case it got caught on anything. Converse. Warm.
b- Because of Edna Moulds(3)?
c- Yes! Exactly!
b- I feel like she was missing a trick not weaponising them.
c- Yep! My old French teacher looked just like her.
b- Was she as short?
c- YES!
b- Iconic.
c- She was nice to me but shouty if you were merde at French.

Favourite Instagram account?
c- I really like WhimsicalWonderlandWeddings, the sassy quote pages and anyone with an ugly baby.
b- I have never previously heard of a wedding Instagram, which is so foolish now I think of it and now I need to follow them all.
c- Dude, I follow loads, they’re so exciting.
b- I can only imagine, I just follow French Bulldogs.
c- Oh girl.
b- They’re great, what can I say?
c- So are the wedding ones.
b- It’s not an Instagram competition. We digress.
c- And the lies we weave are oh so intricate(4)

How do you feel about monster munch?
c- I am a fan. Especially the beef ones.
b- I enjoy a flaming hot.
c- Ooh yeah! Same.
b- I like puffy crisps. I don’t understand how they work though.
c- Like transform a snacks.
b- Yes, I enjoy creating cars from my food.

Do you have a striking school memory? Not necessarily good or bad, just something you always remember?
c- I remember going to school as an Ancient Greek one day and being a week early so the only one dressed up!
b- Why was that even a day?
c- For learning! It was one of my favourite days when it actually happened.

Where’s the weirdest place you’ve fallen asleep?
b- bit of a loaded question for you (5)
c- Oh man, I fall asleep everywhere! When I was a child I used to stand up with my head on a stool and fall asleep. That one is kinda weird I guess. Or Pizza Hut the other day

Guilty pleasure tv?
c- Toddlers and tiaras and Honey BooBoo. Also Bobs Burgers.
b- I keep meaning to watch Bobs Burgers.
c- Steven hates it.
b- Why?
c- He doesn’t “get” it.
b- Too mainstream.

Never have a tattoo again or have a new tattoo every month?
c- Hmm, I wanna say every month because I could just get little ones that make up one piece
b- Get that sleeve you want.
c- Exactly! Although, if I have to pay for them, that could be an issue.
b- Nah, you can have them for free in this scenario.
c- In which case, yes, all the tattoos!
b- What’s your theme?
c- Maybe Alice in wonderland? or Harry Potter? You?
b- I don’t know, maybe just like magic. I like moons and stars at the minute.
c- Ooh that would be cool!
b- Get a crystal ball in the mix.
c- Ooh fun! I bought a really cool chakras necklace yesterday. I’m gonna take some pictures and blog about it but it’s a crystal with all of the different coloured chakra stones in it to balance you.
b- I think I need more than stones to balance me, not going to lie.
c- Oh girl.

Fanciest meal you’ve ever had?
c- Steven’s brother took us to an amazing place in Manchester the first time we met and it was the kind place where the food is tiny and they keep the wine coming, it was pretty amazing. Steven had some kinda roast thing though that looked like a microwave dinner.

Gliders, better or worse than Heeley’s?
c- Worse, because grown-ups using them and they look far too smug on them.
b- I also like that Heeley’s are kind of secret. You don’t know I’m wearing them until I’m whizzing through the supermarket.
c- Yeah man, like why is that child suddenly floating?!

Ever broken a bone?
c- Nope, not one!
b- Codie doesn’t mess with danger.
c- I’m too boring, have you broken anything?
b- My second toe.
c- Oh ouch! How?
b- Caught it in between two gym mats. It’s still bent!

Cotton candy; fun or pointless in every way?
c- Fun but sickly

Finally, give yourself a celeb nickname.
c- A celeb nickname? Like JLaw? or RPattz? C-Stin?
b- I like Co-Stin. Like you’re costin money.
c- Co-stin all the boys!
b- Thank you for your time Codie, this was truly insightful. Any closing comments?
c- No, I think that’s it!

—
1. Alpine was the only ‘nightclub’ in the town where we went to university. For some reason it was ski lodge themed and had a sloping roof. Also the bar tenders tried throw the bottles and it was not fancy. Vomit on the floor was not unusual
2. Ruby Skies was a club in Concert Square in Liverpool. It was free entry but in return it punished you for having its dance floor down a massive flight of stairs and only two toilets.
3. The lady who makes super suits for the Incredibles. I’m a bit ashamed if you actually needed this confirmation.
4. ‘I’m not a shoulder to cry on/But I digress/I’m a leading man/And the lies I weave are oh so intricate’ – This Ain’t A Scene, It’s An Arms Race, 2007, Fall Out Boy. Writers; Pete Wentz, Patrick Stump
5. Codie recently discovered that she experiences CFS and Fibromyalgia which has resulted in her blowing up my phone every time she falls asleep on the train. Learn more about this here.