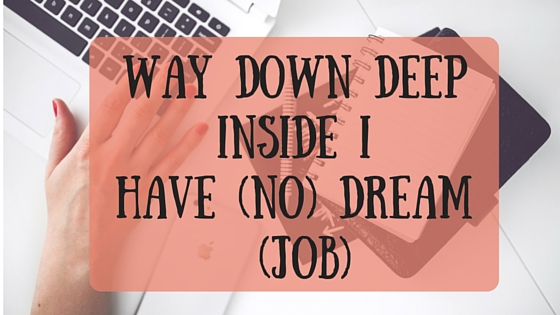 I do not have, and I never have had, a dream job. Not even as a child. I distinctly remember circle time during primary school when a teacher asked us what we wanted to be when we grew up. We were passing round the talking whiteboard pen (our teacher knew we were low maintenance children, we respected that whiteboard pen without question) and a boy called Craig proudly announced to the circle his life plan was to become a professional vampire. The commitment was amazing. He was not in any way joking. In fact, worryingly, I don’t know what he’s doing now a days and I hope he chose to purse another career path because otherwise we’re all in grave danger.
Maybe the problem is I’m a bit of a pessimist. Even seven year old Bethan was a ‘glass empty’ child. When I did ballet classes and dressed as a Christmas tree at the end of year show, I knew that my dance skills were limited. Happy feet and skipping were my top two skills during these classes and after a while I realised Darcey Bussell’s skills were a bit more advanced than that. With that, I decided to (un)gracefully bow out before I was the only teenager in baby beginners. Sadly after this ballet experience, I forced myself into a kind of dance exile and wouldn’t allow myself to get involved in any kind of dance. This self-imposed banishment from the dancefloor was only broken the summer I turned eighteen and we went out to celebrate A Level Results. A decade of restraint was let go on that night. I haven’t stopped dancing since and honestly I’m amazing at it. For a substantial amount of my childhood my dad tried to convince me that being a lawyer was just what I wanted because, and I quote ‘it’s like a type of performance’. But being stubborn was a trait I was born with and as a result I refused to entertain this.

You’d think that going to uni to do a course in Drama would mean that I was passionate about performance and that’s was a dream job for me. But sadly, that is not the truth. I mostly did it out of spite because I didn’t actually want to go to university. My lifelong belief was that my education would end in sixth form, when it’s free and I can’t feel guilty for not getting my money’s worth. My parents had other ideas. Just like Dad’s previous attempts to make me a lawyer, with the benefit of hindsight I understand why they wanted me to go. But at the time I was not having it. So as an act of revenge I told them I was applying from Drama courses, despite having no formal qualifications in the subject (unless you count a C Level GCSE in Expressive Arts, which, trust me, you should not). Miraculously I got onto a course and even more miraculously I graduated from said course. But less miraculously it did not foster a desire in me to become the next Yoko Ono.

At the minute I work for the local libraries. It was pretty much an accident, I started off volunteering and two years later I own several keys and an ID badge. That’s not to say I don’t like my job. Most of the time, it’s pretty great. The amount of boxes of biscuits we were gifted at christmas was bananas. People give you unsolicited book reviews which is honestly more interesting than you would imagine. Shelf tidying is an excuse to have an extended browse for you next read. I get paid more than minimum wage. I could be having a much worse time at work. But is it my dream job? I don’t know. Which causes me a bit of stress, ngl. Surely you know it’s you dream job don’t you? In my mind it’s like the first time you eat pizza. Or when you hear Uptown Funk. Or when you first put Barry M Black Cherry nail polish on. You know, those life changing kind of feelings. It was pretty easy to accidentally find myself here, I don’t want it to accidentally be ten years later and I realise my life calling was becoming a dog trainer for films, do y’know what I mean?