Does Ruben even still count as a newborn? He turned 8 weeks yesterday, which isn’t quite as catchy as a title for a blog post, and as he’s still in the 4th trimester, I’m using some artistic licence. The concept is still the same – travelling with a young baby is really bloody hard! But it’s also worth it (depending on where you are off to). For us, Steven’s side of the family live up North, right near us, and all my family live around Peterborough, closer to the South. I love the North, but I really miss my family and my best friends who live down there.

When it was just the two of us, we’d travel down as often as we could (but no where near as often as we would like!) and do the whole journey in one go. We’d load up with snacks, and Spotify and I would either do some work on my laptop or (more likely) nap. It would take around 3-3.5 hours and we’d decide when to go based on when there would be least traffic. Sometimes we would travel overnight to make the most of our trip.

This time however, is the first time Ruben has been further than Liverpool, and so it was quite a big deal. Babies can’t stay in their car seats for too long as it’s not a good position for them, so already we had to factor in stops where we have never had them before. However, (and I don’t want to speak – or write – too soon as we aren’t quite home yet), this weekend of visiting family has actually been pretty successful! We’ve always said we wouldn’t let having a baby stop us doing things we loved, even if it meant that they were a lot harder. We wanted to bring him on our usual adventures. If you feel the same, or just have to make a long trip out o necessity, here is what helped us.

When Roo is older and we do the same journey, we will have to bring various toys and games to keep him occupied. However, this time it was all about our comfort to best look after him. We had drinks and snacks and the only things in the cabin of the car were his nappy bag, with enough nappies/wipes/muslins for the journey, and a blanket. We wanted to know where everything was to make it as least stressful as possible. 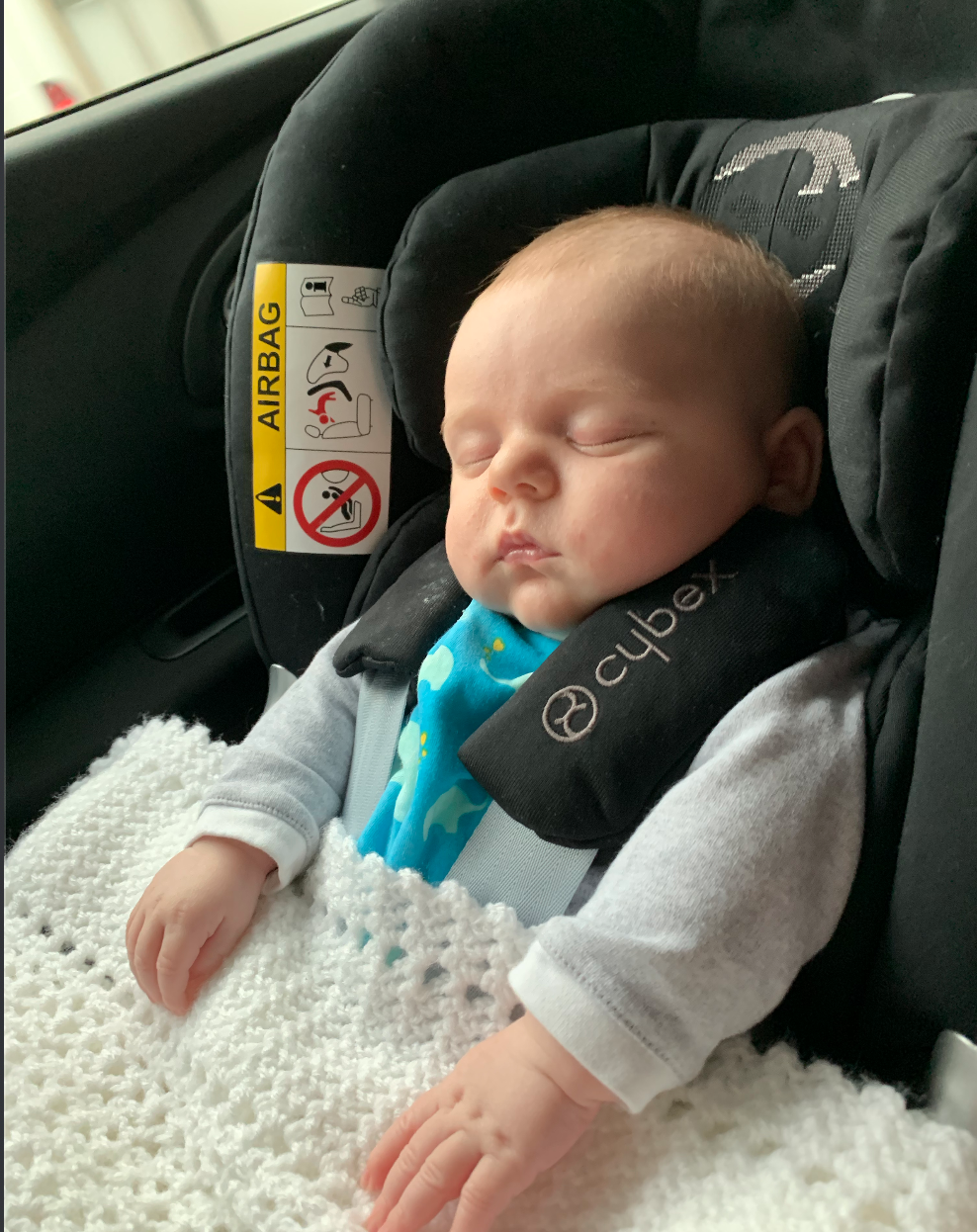 Sit in the back

We are new parents, and I am a worrier. If I was sat in the front with Steven, I would constantly be turning around to check on him. If I can’t see him, we’d have to stop to ease my worries. It just made so much more sense for me to sit in the back with him for such a long drive, and allow me to check that he’s breathing as often as my nervous self desires. It also helps with feeding, which I will get to… 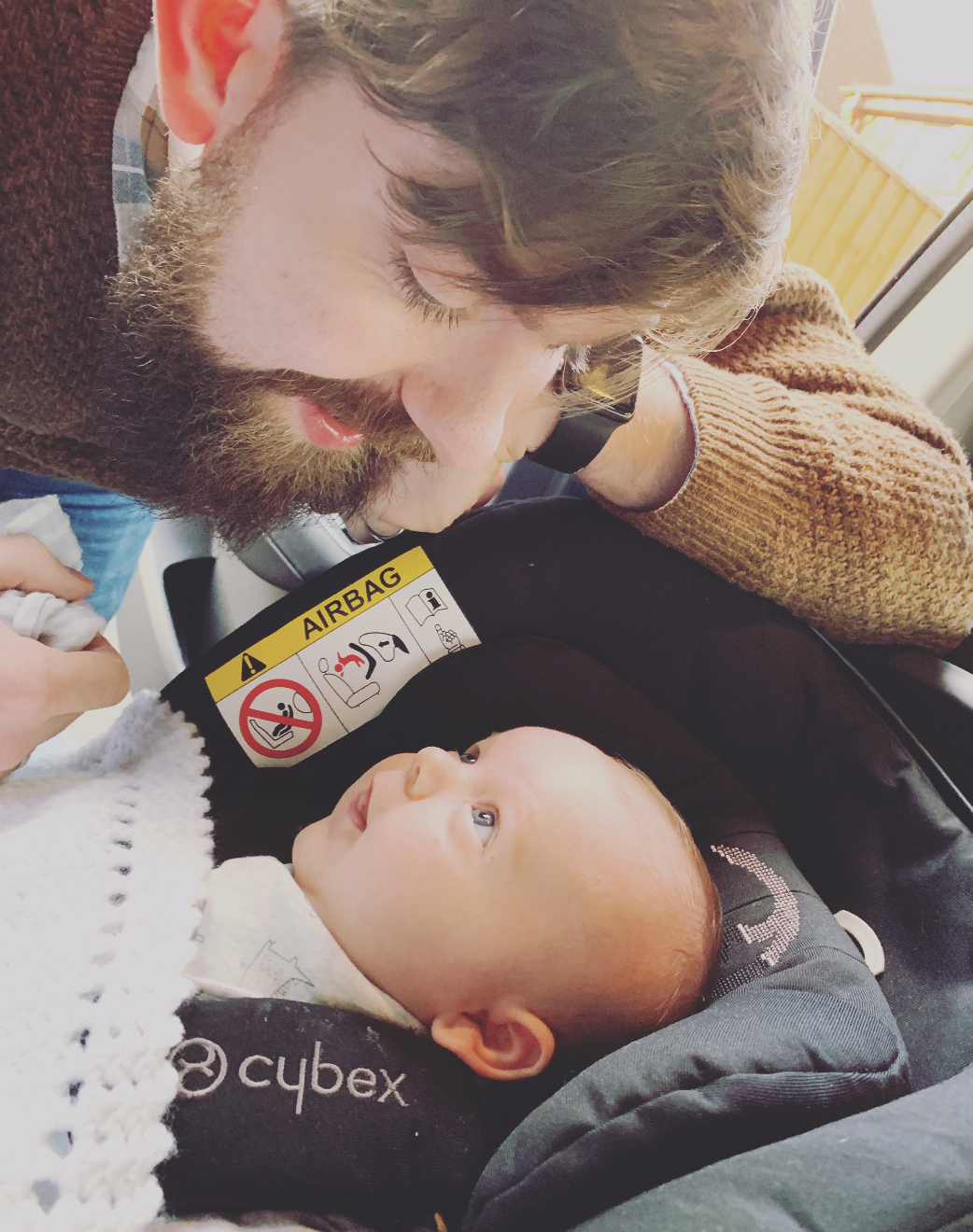 The longest a baby over 4 weeks can stay in a car seat is 2 hours (under 4 weeks it’s half an hour) so we tried to aim for around an hour and a half. That way, if we were stuck in a bit of traffic, we had some leeway. We only stopped twice during the journey, once when we went inside a service station and spent an obscene amount on Burger King and the second time we just hung out in the car, with Steven changing Roo on the passenger side seat (where he (Ruben, not Steven!) weed everywhere!). Both worked just fine.

This was my biggest concern when it came to the long journey. We are still feeding on demand so we couldn’t time his feeds with stops. However, I am a frigging genius and my baby is the best, and therefore we found an amazing compromise. Thanks to my ol’ pal the Haakaa I managed to express milk without properly pumping, pour it into my Minbie bottle (amazing for breastfed babies) and feed him on the go. At one point, my left hand was holding the bottle for him, and the right one was holding my Haakaa. As soon as he finished one bottle, I could add some more milk to it. It kept him happy the whole way and it was pretty easy. 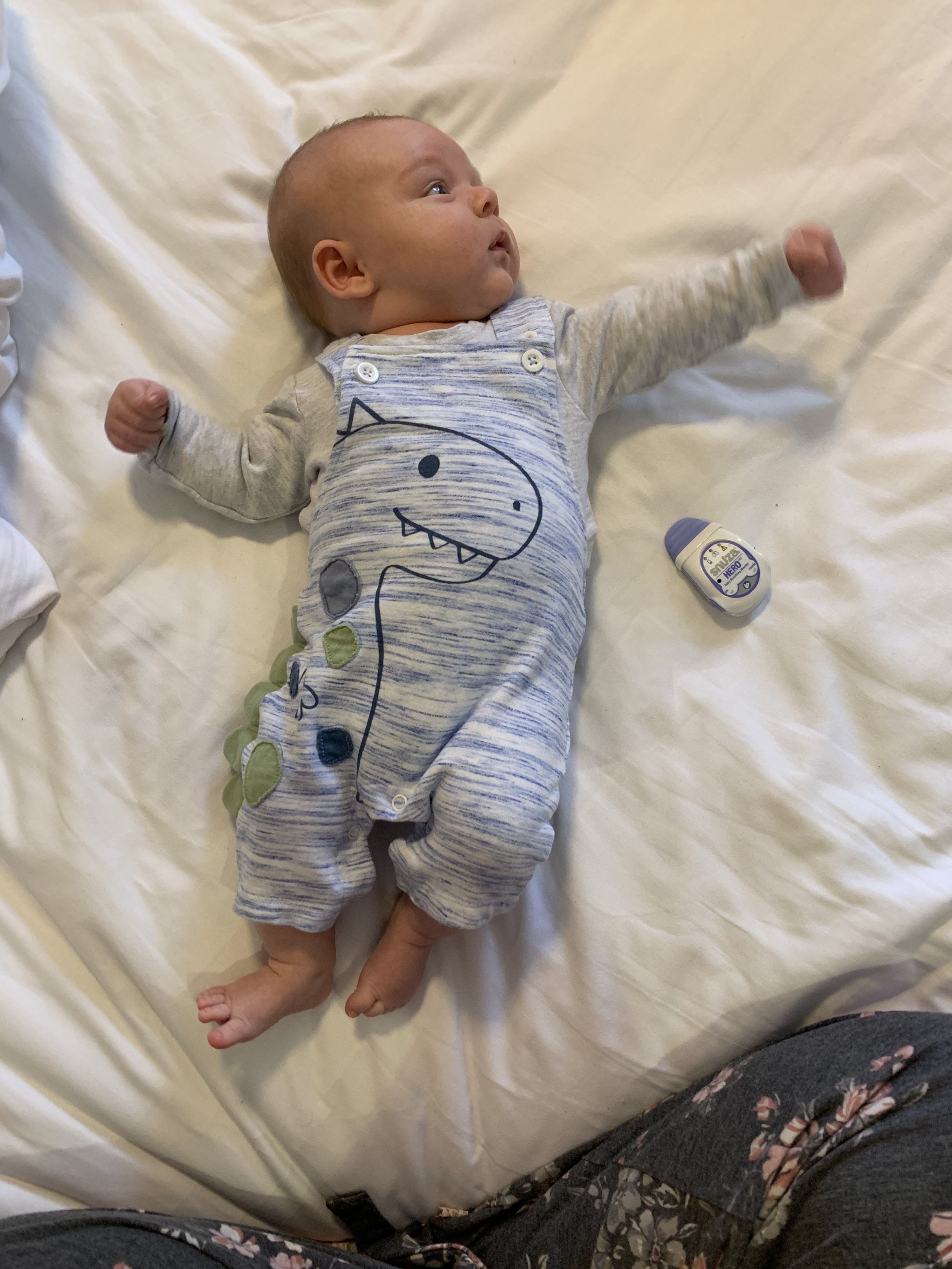 Usually Ruben sleeps in a Snuzpod next to my side of the bed but we weren’t going to take that in the car with us. We considered the Moses basket, but again, it was pretty bloody large. Luckily, where we bought the pram, we were told that the carry cot was suitable for a few night’s sleep, as long as we use it safely with the usual guidelines and not long-term. It was a lot more convenient as we were bringing his pram anyway and he ended up sleeping like an actual dream (7.5 hours!) At home we use an Angelcare monitor, but one thing that helped me sleep was trying out the Snuza heart rate monitor which just clipped onto his nappy and worked amazingly, so I felt as though I could really relax. I’m going to be doing a whole post about this clever little device in the next few days, so watch this space! 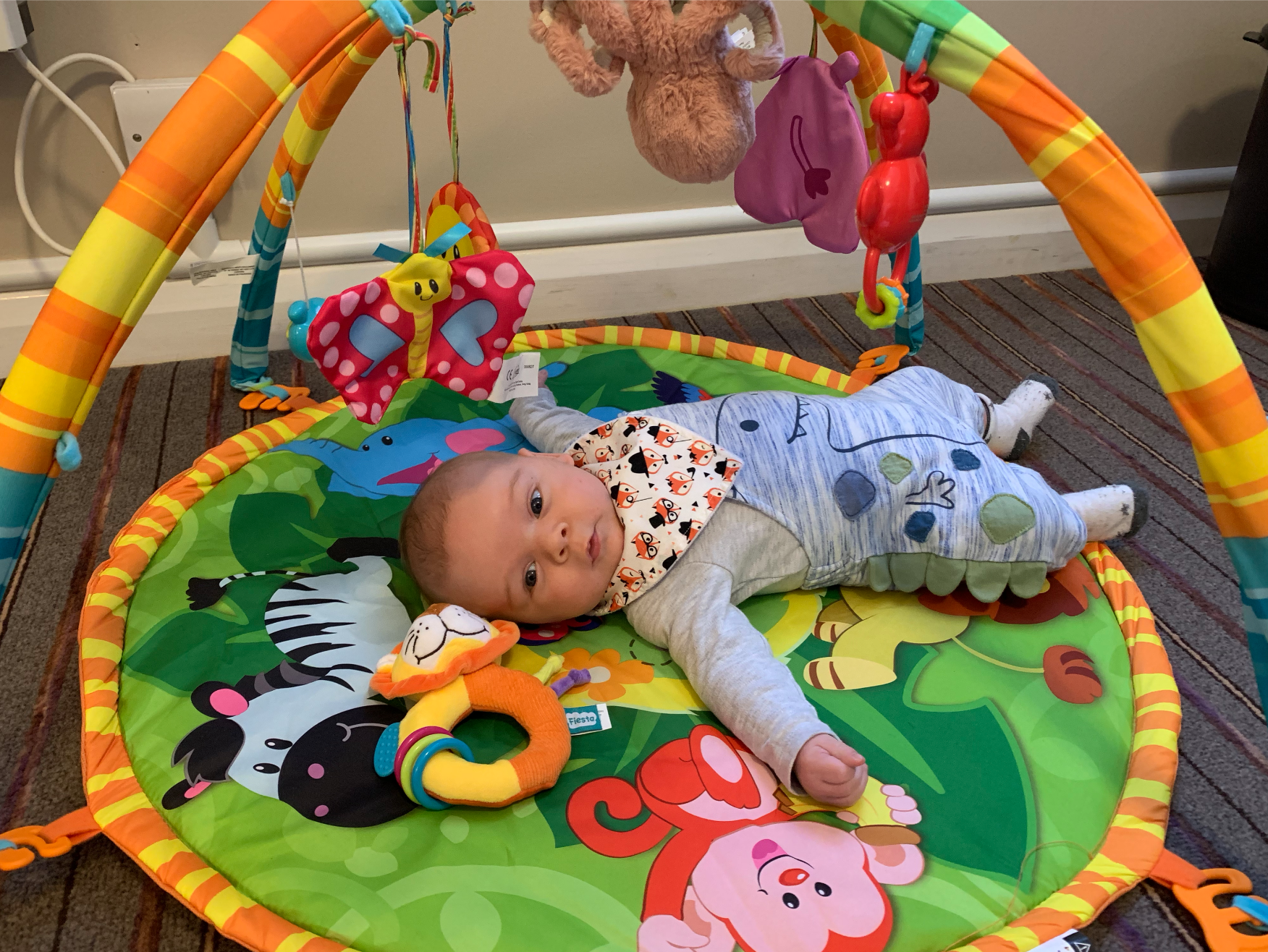 Obviously Ruben is only 8 weeks, so he doesn’t really play yet as such. However, as we were leaving the house, Steven suggested bringing the play mat and we are big over-packers so we thought we’d give it a go. It was one of the best things we brought with us for sure! We popped it on the bed and laid him down and he spent ages just looking at the toys, chatting away happily and smiling. He was so content and I think it helped having something familiar from home. It meant we were both able to get ready for the day and as he cannot roll, and the bed was so big, he was safe in the middle. 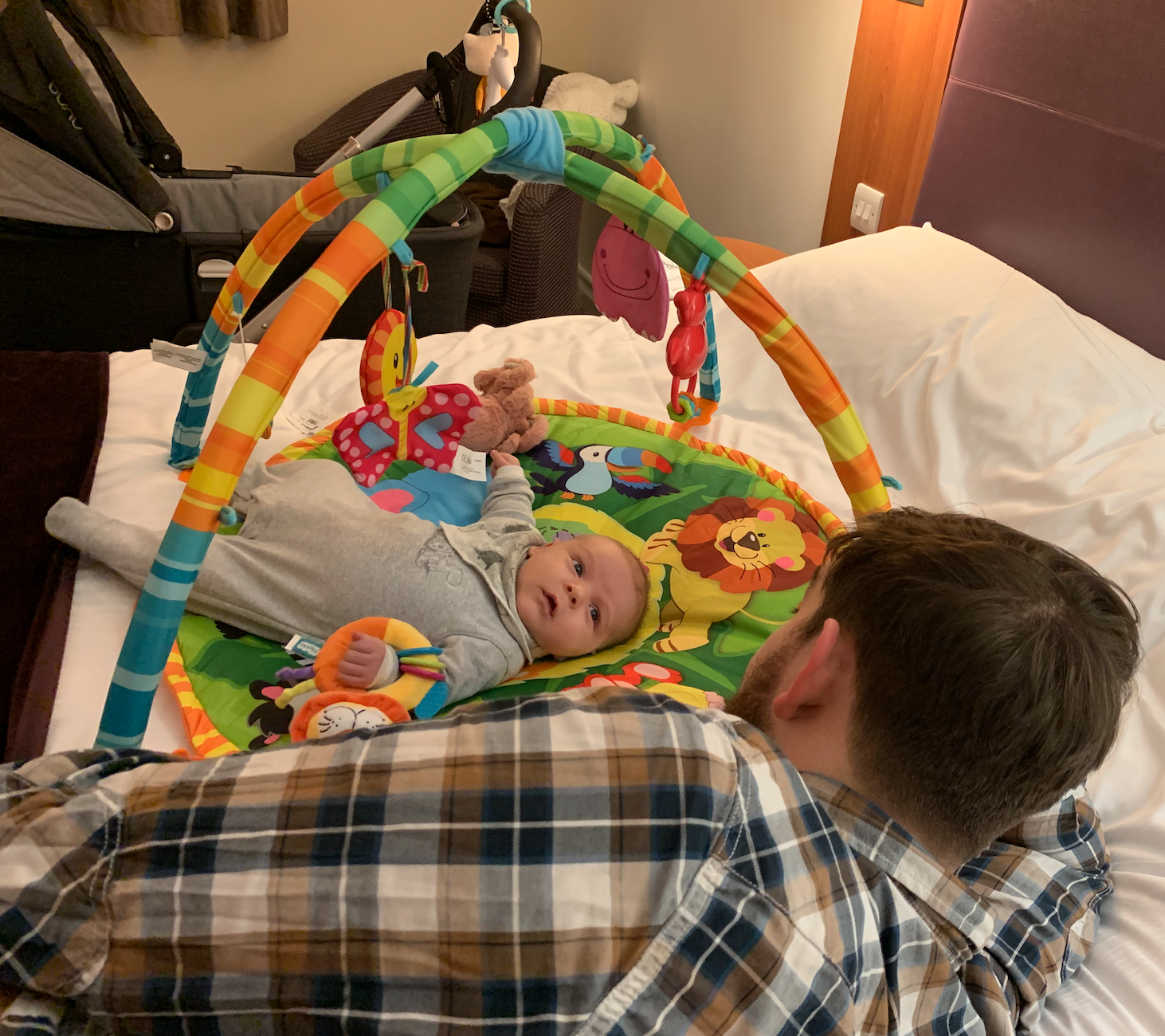 I realise we are lucky, because Ruben is a pretty chilled baby, and I hope that by doing things like this, it will mean that he stays chilled as he grows and we can go on many more adventures with him. We want to make going down to Peterborough something we do much more often, because I want him to know that side of his family, and some of my best friends (and their babies!) and there too – I don’t want to miss out on them!

The fact that it went so well this time has made me excited to go on more adventures with our little sidekick. Of course, he’s growing and changing every day so by the time we next go down, things might be completely different! We are planning on heading down every other month if we can, so watch this space!

If you’ve got any other tips for travelling with a baby, let me know in the comments! 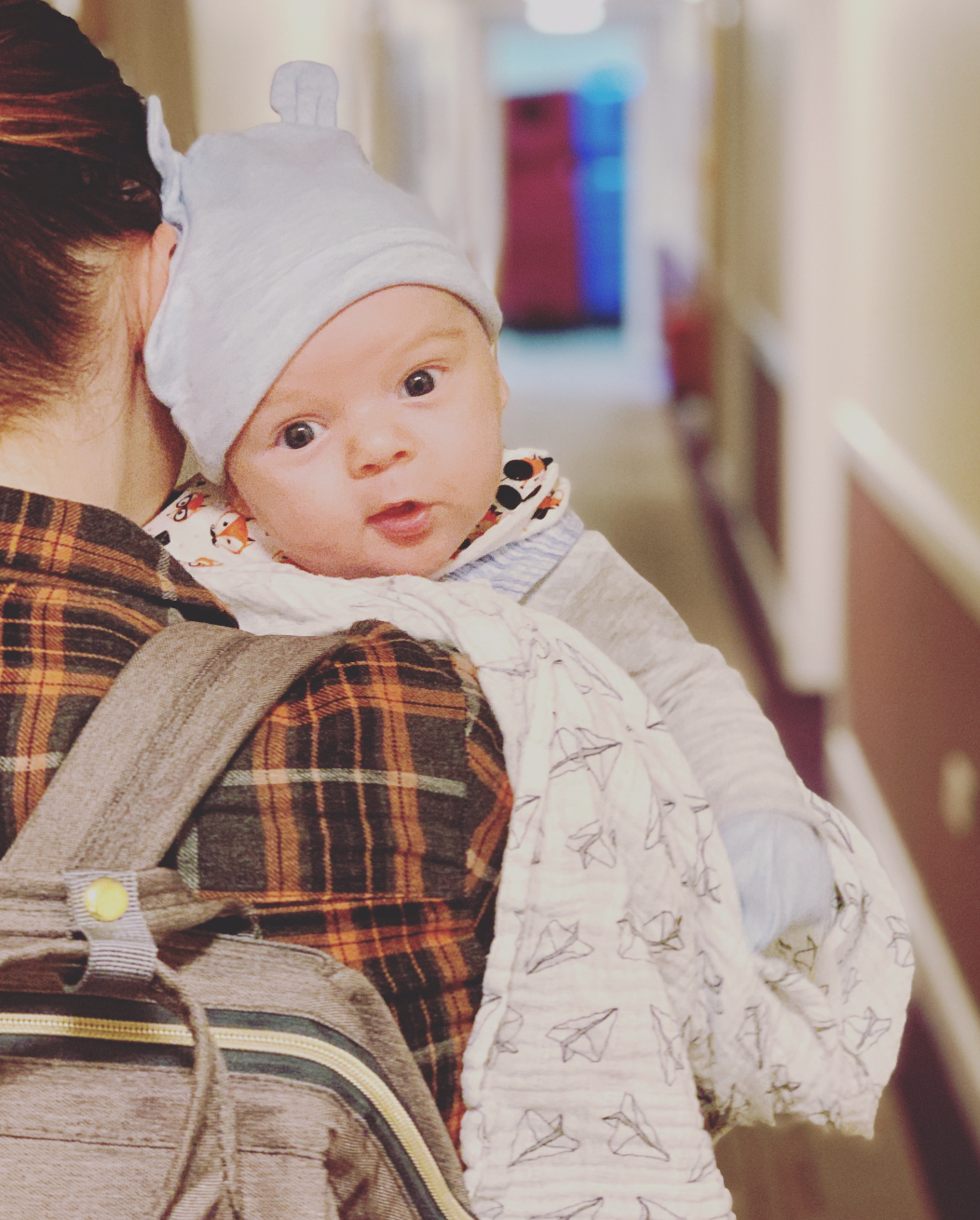