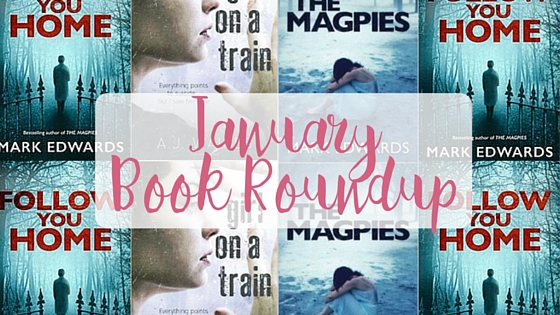 It’s halfway (ish) through February and I decide that I want to start doing monthly round ups of the books I’ve been reading. This is the kind of idea that should have come to me in December so I could start it off nice and fresh and on time, but sadly that is not the way my brain works. So here I am, February 19th with my January book round up..
(Ps., I’ve already read more books in February than I did in January so next months will be long!)

Of course I started the year off with a good ol’ Mark Edwards book. This one took me a little longer to get into than some of the others but I really bloody enjoyed it!

The story follows couple Daniel and Laura, as they travel across Europe – one last hurrah before settling down and popping out some sprogs. Something happens along the way that is only hinted at and alluded to until much further along, which basically ruins their lives. There’s not much more that I can tell you without giving too much away, but if you enjoyed any of his other books, then you need to check this one out. There are Edwards’ trademark twists along the way, and it will leave you feeling pretty shaken. I think this is one of his darkest, but also best!

Girl on a Train – A.J.Waines

Okay, confession time. The whole time reading this book, I was certain that it was the bestseller that everyone was going on about. (Seems I wasn’t the only one!) When people told me it was hard to get into, I disagreed – I really rather enjoyed it.

It wasn’t until I went to upload it to Goodreads, that I realised, like a true idiot, that it was not, infact The Girl on the Train, but rather some random girl on a train. Oops.

That said, I quite liked this book. It was another one of those where I found it hard to believe that anyone would be so in tune with another person (let alone a stranger!), that they would understand all the tangentially linked “clues” that were left, often accidently. Although I really need to get over that!

We follow Anna, a (frankly rather nosey) journalist, still reeling from her secretly gay husband’s suicide, as she tries to find out the circumstances of the death of Elly – a girl who sat on the train next to her for a few stops. Add to that a missing child, a church choir and the kind of unbelievable consequences that link everything together, and that’s basically what you’re dealing with here.

I did enjoy reading it (though it was so stressful at times), and I really think it will forever be in the shadows of it’s similarly-named friend – but it is totally worth a look. I should probably read the actual book sometimes soon…

Of course I had to read another Mark Edwards book – I am obsessed! I did, however, have to take a little break after this one, (you’ll see from next month’s post I have kept away from psychological thrillers for a while as I was becoming somewhat paranoid).

Telling the tale of Jamie and Kirsty’s horrific neighbours, this is slightly different to Edward’s’ other books, but nonetheless engaging. I began to seriously hate with a fiery passion the evil couple, and I couldn’t help but be physically affected by the tension. A few times Steven would call to me in the bath to see if I was okay, as apparently I was making audibly concerned noises…!

This book will break your heart and stress you out. You should totally read it!

So there you have it. My first monthly book review. Consider your life changed forever! (Maybe…). Let me know what you think, if you’ve read any of these, or if there’s another book I should be checking out!