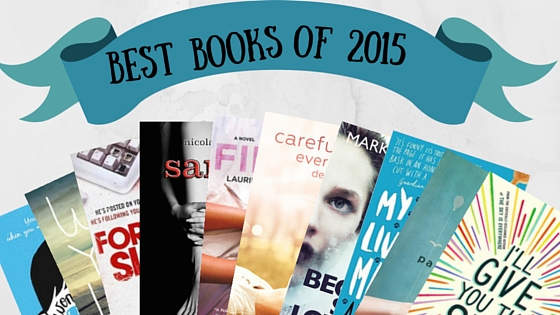 Look, it’s technically still January (is it just me or has this month lasted forever?!) so I feel like doing a ‘books I read in 2015’ roundup post is kinda okay, right? I know not all of these books were released in 2015, but that’s when I read ‘em, so hopefully you’ll find something to tickle your fancy (oh-er) on this list. (Warning, 8/10 of the books are YA fiction… Sorry, not sorry!)
Santa; – Nicola Mar

Don’t be fooled by the cheerful title of this book, the story is anything but! Following the story of June, who is cruelly assaulted by “the popular kids” at school, and the horrific bullying that comes of a result of some compromising pictures, leading June to think that there is only one way out… At times, this book is hard to read in its realness, but it really is a well-written story and allows you to reassess your own thoughts and feelings. Also, 10% of the sales are being donated to Project Semicolon.

What you Left Behind – Jessica Verdi

You can read my full review of this book here but this was a pretty sweet book. It dealt with issues that aren’t often explored in books – for example being a single teenae father, which I found refreshing. None of the characters were “perfect” either which made a nice change; it’s nice to be reminded that sometimes people are just human.

Again, I wrote a full review of this book here. The best discovery of 2015, was Mark
Edwards, without a doubt! I have since read a whole load of his incredible thrillers, and not been disappointed once! This is where it all began for me, and it will still remain one of my favourites.

Because She Loves Me – Mark Edwards

Yep, another Mark Edwards book! This one follows Andrew, and his new girlfriend Charlie (these girls are always such quirky Manic Pixie Dream Girls – that should be a warning sign!) as weird things began to happen around them. In true Edwards style, there are red herrings and twists galore, but it all ties together so cleverly that no matter how much you try to guess the ending, you’re likely to be very wrong…

I love the concept of this novel. 17 year old Mercedes provides a “service” in which she lets boys lose their virginity with her, coaching them on what girls like, in order to ensure that these guys’ girlfriends have a perfect first time – something that she never had. This book was just incredible. There were times that it hit so hard that I had t take a few deep breaths before carrying on. It’s a complicated idea in theory but reading the book, you just seem to understand Mercedes’ thinking.

Review here. Although it seems like this is a typical girl-meets-girl love story, there happens to be a whole other layer that you do not see coming…! Academic Audrey and rich, annoying Scarlett are really great characters and their tension is palpable. I enjoyed the fact that it was a love story that just happened to be about two girls, without making their sexuality the main focus. It’s not too heavy and actually a really enjoyable read.

Such a beautiful book. Stevie is seventeen and a patient in an eating-disorder clinic, however she is planning to end her life on the anniversary of her brothers death, an event she blames herself for. This story just feels real in a way that many others looking at eating disorders do not. It’s frustrating and heartbreaking but also fascinating and will stay with you long after you’ve finished.

My Sister Lives on the Mantlepiece – Annabel Pitcher

A story about the aftermath of the London bombings told from the point of view of a 10 year old boy, 5 years on. This book is gloriously uncomfortable and at times, brutally honest. We all know someone with views like Jamie’s Dad, who clearly is not dealing with his grief in a healthy way. The whole concept of the book makes you really think, and the innocence and naivety of a 10 year old boy is the perfect vessel to explore such difficult themes.

Apparently I enjoyed books written by 10 year olds this year! Wonder follows Auggie, a boy with a facial deformity who just wants to be” normal”. That said, after being sent to mainstream school for the first time, things aren’t as easy as they seem. Told through several different narrators, this story is at times absolutely heart wrenching but still easy to read.

I’ll Give You the Sun – Jandy Nelson

Easily one of the best books I’ve ever, ever read. Words won’t ever do it justice, so please, just read it. (Actual review here)