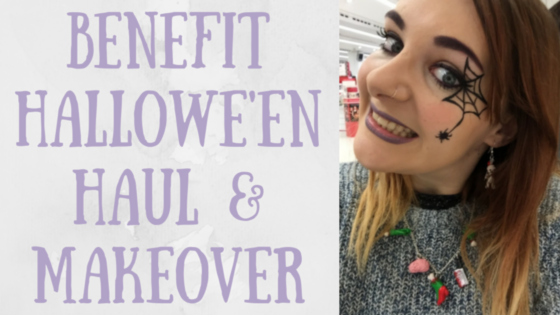 On Saturday, which just so happened to be Hallowe’en, myself and Steven decided to have a rare ‘Treat Yo’Self Day’

We headed to Manchester in search of excitement and wonder, before an evening shift at The House of the Dead. Walking through Boots, where Steven bought a new shaver (Lord knows he needed it!) I decided to have a little mooch through the Benefit stand, which just so happens to be one of my faves. I’ve recently bought one of their gift sets (post coming soon!), and have really been enjoying it, so wanted to have a little moocharoo at what else was around.

I was approached by a lovely lady, who was a big fan of my Shiny Creations earrings and as we were talking, she offered to try some products out on me. Never one to say no to a professional showing me how make-up is supposed to be done, I sat down. As Tamzin worked her magic on my face, Steven watched fascinated. As you will have seen in this video , Steven likes to think he knows more about make-up than he evidently does…

Anyhow, Tamzin was lovely and started by using a mix of the moisturiser and Pore-fessional for a base. The moisturiser smelt incredible (spoiler alert, I ended up buying it!) and with the primer, which I got in my gift set, my face was left feeling so soft. She then used the Hello Flawless, Oxygen Wow foundation that I also bought on my last trip and loved. As it was hallowe’en, she used the They’re Real! Push up liner in black and purple to do my liner and extend it into a spider’s web. I have never managed to get a good result with the liner myself, so I was amazed at how good (and easy!) Tamzin made it look.

She then moved onto my eyebrows and put some purple in them, which at first I was a bit worried about, but they ended up looking super cool! Next, she gave me an ombre lip, using a purple cream eyeshadow – I’m pretty safe with my lipsticks, so this was a big statement for me, but I absolutely loved it! After using the new Swarovski® (how do you even say this?!) They’re Real mascara (which was the first Benefit product I ever used) and a bit of blusher, I was really impressed with the result!

Tamzin was really friendly and made me feel special whilst she did my make-up, rather than just like she was trying to sell me things. This was a good technique as I ended up buying the Moisturiser, the FakeUp Concealer (I’ve wanted one from them for ages!) and got a free gift of a mini Watts Up (which I am loving using!) and They’re Real mascara – plus a whole load of compliments on my face!