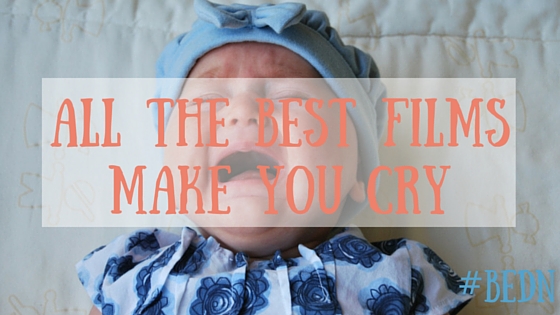 Today is another guest post from everyone’s favourite Ice Queen, Bethan (suck on that Elsa!). Don’t forget to follow her on Twitter @Beyfbaby
In everyday life my general vibe is pretty stoic. I think it’s the eyeliner – the thicker I wear it, the more it absorbs my excess emotion and keeps me in check. But the truth is that I have a lot of emotions. One of the primary emotions I feel when I’m in the privacy of my home and make up free, is crying.
Crying isn’t an emotion Bethan.
Like fuck it isn’t.

What makes me cry the most? No, not that bloody John Lewis Advert. My favourite films do. Some of them to the point where I can rarely watch them. That’s how logic works isn’t it? So I thought I’d give you a rundown of the top five ways to break me emotionally in under 2 hours.

This is my favourite film in all of the world. It’s amazing, it’s so good it got released twice! I mean really, your fave could never. If you don’t like The Little Mermaid there’s always going to part of me that doesn’t trust you, even if we’re best friends, related or married. It’s iconic and we all know. I can’t accurately predict when this film will make me cry, it could strike at any moment. Sometimes it’s the wedding when Ariel and Eric are literally #couplegoals. Sometimes it’s when Triton whips Ariel up some legs and she walks out of the sea in a dress made of pure glitter (most underrated Disney dress of all time). Sometimes it’s simply at the opening titles because the idea of mermaids are just overwhelming to me and the whole film just looks beautiful. The Little Mermaid was the last Disney film that used hand drawn cells filmed with analogue cameras which is an amazing process you should Google. The film includes over a million hand drawn pictures! So it’s not surprising it brings me to bloody tears.

I feel like this a film that not enough people have seen. It’s based on a book by Rachel Cohn and David Levithan about two not-quite strangers who spend a night together in New York City. It has a class soundtrack and is the reason I love Kat Dennings and will always overlook that fact she was in Two Broke Girls. I don’t want to ruin the plot of this film too much. I’ll just say that the ending really gets to me because it almost makes you forget that the events of this film take place over one night. Also if I’m feeling really emotional, a scene in which the titular Nick’s friend and bandmate discusses the importance of holding hands.
‘The Beatles, they had it all figured out, okay? “I Want to Hold Your Hand.” The first single. It’s effing brilliant, right? That’s what everybody wants, Nicky.’

This is a recent edition to my list of shame but it’s a very worthy one. Pride was always going to be one of my favourite films because it’s about the Miners’ strike of 1984. I’ll watch anything about the striking miners – probably because of Billy Elliot or my South Yorkshire heritage. The story of Pride is based on true events and follows a London based lesbian and gay activist group who begin fundraising for a small Welsh visit. This film is equal parts hilarious, beautiful and heart breaking. It’s a sort of laughing through tears film. Again, I don’t want to ruin this wonderful film for anyone wishing to watch it but my main emotional outbursts take place during an impromptu Welsh sing a long and when we discover what happened to our characters in real life. Oh hot damn, the first time I watched this film I was with company and it was a titanic struggle to keep my shit together.

Perks of Being A Wallflower

This film. Crying doesn’t describe what reaction this film gets from me. I wept so hard when I first watched this film I thought I was dying. It’s a miracle I’m alive to tell this tale. Prior to watching this film or reading to book it is based on (which is iconic and should be read by everyone on earth), that infamous quote was making it’s rounds on tumblr. It seemed cheesy and clumsy and I thought that nothing in relation to it could move me at all. I was wrong. I have never been more wrong about anything. This film is dark and wonderful. These teenagers dance to Rocky Horror and drive around in the dark and make my heart ache. I don’t think I’ve seen this film in like a year and half, just because I’m emotionally ready too yet. It’s literally that good.

It feels good to end on a seasonally appropriate note. Love Actually is a classic of a film, it’s good on levels I probably don’t even know about. My only criticism of this festive epic is that everyone’s straight. But that doesn’t mean this massive hetro-fest doesn’t get to me, because it bloody does. I think I probably manage to shed a tear at the ending of everyone’s stories for one reason or another. But I think it is universally acknowledged that the saddest and most beautifully acted moment in Love Actually goes to Emma Thompson. If you have yet to see Love Actually, hello welcome to our planet from your life in space. Also look away know. Emma discovers that her husband Alan Rickman has bought a beautiful necklace but when she comes to open her jewellery box shaped present, she instead finds a Joni Mitchel CD. To us, the audience, this is not a surprise. We know Alan is an idiot and is making some horrible mistakes but Emma manages to make us feel like our own marriage is at stake after year of commitment (despite being 22 and only feeling commitment towards your best pair of boots). She listens to that Joni Mitchel CD and cries her heart out. And so do I. It’s amazing.