Today’s post is written by the hilarious Bethan, who happens to be my make-up, fashion and general life advisor. (Also friend, but y’know)

Bethan is a wannabe Disney Princess living “Up North”. She enjoys fall out boy, cheesy anime and man buns. You can follow her Twitter @Beyfbaby her blog: https://beyfbaby.wordpress.com/ and on Tumblroo www.tumblr.com/beyfbaby

Hola readers of Codie’s blog! I’m Bethan and normally my blogging only goes as far as reblogging pictures of Darren Criss and text posts about Ross Geller being literally the worst on good old tumblr dot com. But today I want to talk about something that is as close to my heart as a people creating musical versions of Harry Potter, and that is Halloween – specifically easy Halloween make up.

Sometimes Halloween parties are planned far in advance and you can spend all the time in the world picking out the coolest costumes and swanning round Superdrug for hours and hours buying the coolest lashes, eyeshadow pallets and lipstick. But sometimes life doesn’t work out that way. Maybe you’ve been busy with work or school, maybe you’re totally skint, or maybe you and your friends were just going to watch Hocus Pocus with some Haribo and suddenly your group Whatsapp goes wild and it turns out now you’re all going out dressed as the cast of Hocus Pocus instead. What do you do then? You get creative is what you do!

Black Eyeliner This is the most versatile thing that exists in the world, particularly when it comes to Halloween, and it’s not really a special buy. A liquid eyeliner is good for cat whiskers, because there is no shame in going dressed as a cat to Halloween events (or any events really). Or even you and you’re best mate could go as Dan and Phil. One of you need to dress all in black and the other one needs to rock a checked shirt. Add the whiskers and you’re the latest edition of Phil Is Not on Fire! Sure it’s a bit of a niche reference, but if you can’t get a bit niche at Halloween, when can you? 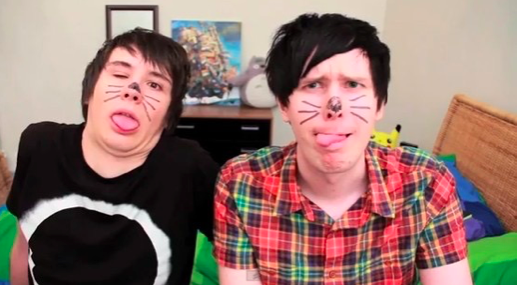 Alternatively you could go for that Ibiza feel and draw a bit of leopard print on your face. Admittedly that sounds a bit like an instruction for a GBBO technical challenge but they’re actually not that hard to draw. Start with making a circular shape with some eyeshadow – you could go for a gold or maybe just a brown if you’re not feeling as jazzy as all that. And then line that shape with your eyeliner. It’s worth a quick YouTube search for a tutorial if you’re more of a visual learner because there’s plenty out there but don’t worry about being super precise because it’s really not that kind of look. Then just set it with a setting spray or if you don’t really use that kind of thing a bit of hairspray will do as a one off. Don’t make a habit of it though kids, it’s not great for your skin. 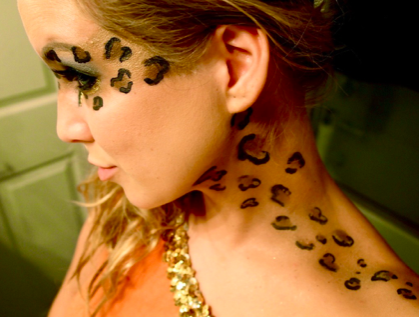 Another fairly easy but also impressive thing to do with eyeliner, preferably a pencil one is a gradient lip. Firstly line your lips with the pencil in the same way you would a lip liner. At this point it isn’t a great look, I will admit but carry on because it gets better. Now to pick a lipstick. This look works best with a bright red. A plum would look good too, but the key is not to use a lipstick too dark or you don’t get the contrast between the two colours. If you have a lip or small concealer brush this is a good time to use it to avoid getting any black on your lipstick. The final step is simple, just rub your lips together. Huzzah, instant gradient lip. It makes any witch costume that little bit cooler without too much effort. This is me wearing aforementioned look last year. If I can do it, you certainly can! 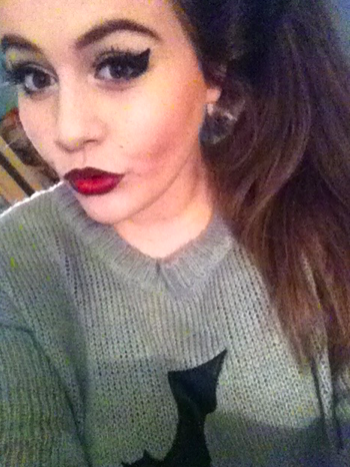 And finally, on the subject of eyeliner, you can use it for the task it was originally designed for – lining yo eyes. Do a classy cat eye and feel your Morticia Addams fantasy. Relive 2004 and khol line your whole eyeball and be Avril Lavigne (don’t recreate the Hello Kitty video though because that was too scary, even for Halloween). Just do your bottom lash line and be Pete Wentz for any Fall Out Boy Video ever. You could even fashion some toilet tubes into antlers and you’re instantly the protagonist of Sugar We’re Going Down. (Yeah I know he wasn’t that actual part in that video but it’s Halloween and that means you can totally blend ideas. If you wanna get cannon with it, have a friend dress like Kimmy K and re-enact the thnks fr th mmrs video instead).

Most people have a fave lip product, be it a standard lipstick or the newer liquid lipsticks. Lip liners also seem to be bouncing back from that weird period in the 90’s when people wore it two shades darker than their lipstick. Although to be fair, weirder stuff happened in the 1990’s, Justin Timberlake had Super noodle hair for goodness sake! For this stuff I’m pretty much sticking with red lip products, because it’s a standard issue innit really.

So of course you can use your lipstick for the obvious – on your lips. Team your classic red lip with some sunglasses and a nice tea dress = instant Taylor Swift. Alternatively for those darker haired individuals, a red lip with some pin up curls makes for a good Dita Von Tease. (Hair tutorial here https://www.youtube.com/watch?v=3qr4cK5xmNg). 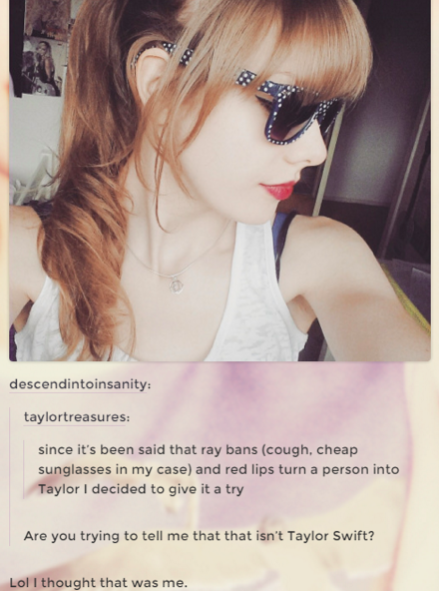 While a red lip can help build a classic pop culture icon, a red eye is good if you wanna get a bit spooky *Spooky Scary Skeletons plays in the distance*. Essentially, red near the eyes makes you look pretty dead and washed out, normally not so hot for an everyday look, but excellent if you’re going for a zombie/ general undead something or other. The texture of a lip liner is preferable for this look, but it’s do-able with a lipstick and a small thin liner brush. Use the red on your water line, tight line (basically the water line of your upper lid, it’s worth practicing because it’s a bit tricky at first) and the outer corners of your eyes. Pair it with a dark shadow on the rest of your eye and you have an instant undead eye to use as you wish. Alternatively you could be more liberal with your red, pair it with a black blazer or suit jacket and channel your revenge-era Gerard Way. An excellent benefit of this look is that wherever you end up on All Hallows Eve, pretty much everyone there will fancy you, because let’s be real we all fancied revenge-era Gerard and don’t try and deny it, I know it to be true. Personally, I used Red Barry M Dazzle Dust to create this look but I doubt you have any of that casually lying about. 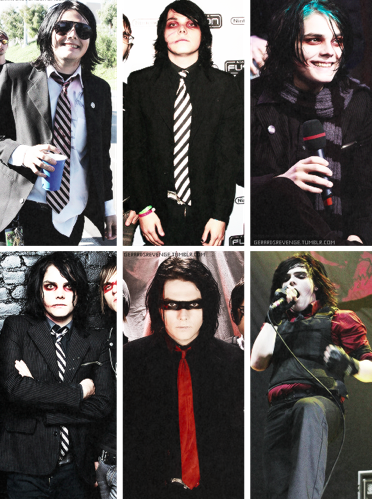 Fake blood is hard to get at short notice and unless you have cornflour and food colouring lying around, going all Dr Frankenstein up in the kitchen isn’t going to be much help either. So red lipstick rides to the rescue again – particularly a liquid lipstick if you have one. As much as it pains me to say it though, you’ll have to be slightly more reserved than you would be with shop bought stuff or you’ll run the risk of looking like you got ready in the car on the way out and went over a lot of speed bumps. So if you’re going for the vampire look, keep it simple with one bloody trickle. Or you could do a Mia Wallace with a simple bloody nose. I really love this as a Halloween look – all it takes is a white shirt and a bob hair style to create something pretty cool! If you have flowing mermaid locks like myself, a faux bob is dead simple to achieve tutorial – https://www.youtube.com/watch?v=bG3-QuHKJow. Also you can mix the red lipstick with some darker shadows if you fancy creating a bruise. There’s not much too creating a bruise, other than pretty much just going for it. I would recommend mixing colours on the back of your hand first though, to make sure you’re happy with them. Using the red will create more of a fresh bruise look, which is something to bare in mind. 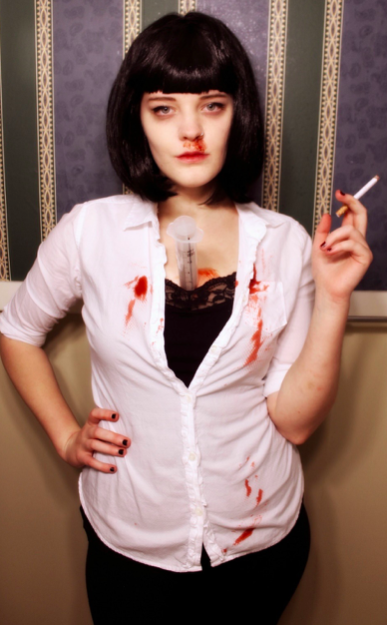 Drag queens have been highlighting and contouring since time immemorial but the Kardashians have really brought it to the mainstream – second shout out of the blog Kimberly you lucky devil! Halloween is the ideal time to give contouring your all, nothing completes a spooky look like a sharp cheekbone. It’s worth going over your usual contour colour with a grey eye shadow to emphasise your look to darken it and make it more seasonally appropriate. Your usual contour colour is also excellent to recreate a look of fur. You can create literally any animal with this, go as cute as a rabbit (or if you have the ears – a mouse, duh!) or as spooky as werewolf. Use a large fluffy brush to apply the powder, but generally stick to the areas of the face you would usually contour to avoid making yourself look too muddy. Using a thin brush, like a brow brush for example, you can use a darker shadow or ever your brow colour to add hair detail. Gabby aka Velvet Ghost has recently featured this look on her Halloween tutorial video which is worth checking out if you want a guide for this look – https://www.youtube.com/watch?v=YdaqM8QvoOI

Now highlighter, on the other hand, cannot be over done on Halloween. If you fancy being any kind of mythical, ethereal creature, highlighter is going to help you out. Prime example is a fairy – put on some green, throw your hair in a high bun and get liberal with the highlight and you’re basically Tinkerbell reincarnated. Another good look to get trigger happy on the highlight is a mermaid. If you’ve got any spare fish net tights lying around, put them on your head so the actual fish net part of the tights is covering your forehead (Sounds dumb, but trust me, it gets cool).Using a shadow colour of your choice, brush over the tights in the desired area, usually sticking to the temples looks cute. When you remove the tights, you’re left with a pattern like scales which you can dust over with highlight. Wear this look with wavy hair and a crop top and you’re the hippest land based mermaid at the party, just like Traci Hines!

I hope this little Halloween tricks help you out this year and whatever you decide to dress out you have lots of spooky fun and eat your fair share of tasty treats because that’s what Halloween is all about really. Well that, and burning lots of autumn scented candles in ghost shaped candle holders, but maybe that’s just me.