Being pregnant is really bloody hard. I won’t go into all the reasons why (but you can watch my video on it here) but if there is ever a time you need a holiday, it’s when you’re pregnant. A baby moon might seem a little extra, but when you really think about the fact that in just a few more weeks your life is going to be turned upside down by a tiny tornado and this is the last time you’ll be able to travel with your other half as just the two of you, you’ll start to see why it’s a necessity.

Originally, we had planned to go to Paris for the ultimate romantic weekend away. I mean, I can’t walk far, drink wine or eat a lot of cheeses, so really it might not have been the best suggestion. Thankfully, fate conspired to put us off our trip to France. I would have had to get a letter from my doctor to fly that late into the pregnancy, and when we looked at Airbnbs that were within our budget we were met with lovely apartments that didn’t actually have real beds. They also didn’t serve breakfast. So really, we would be booking a lot for just the ‘air’ side of things! We then had to go for a few extra appointments between the baby growing too small and my body deciding to bless me with kidney stones, so we ended up leaving things to the last minute.

As in… the day we were due to leave. 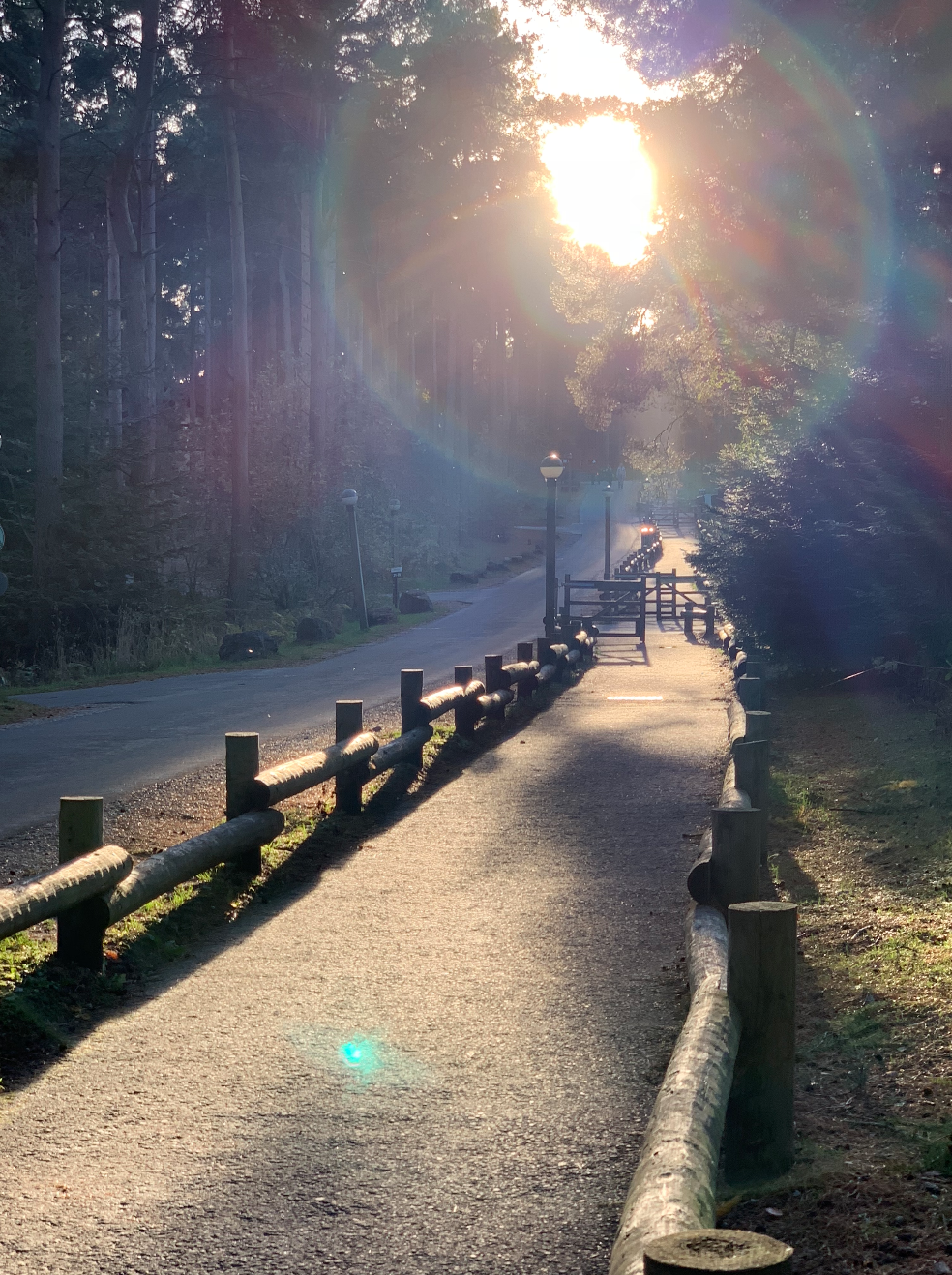 We visited Whinfell Forrest Centre Parcs with our friends back in June and had a great time. It was the first time either myself or Steven had visited and we knew we wanted to come back. We just hadn’t expected it to be so soon!

We booked the executive double apartment, expecting something quite basic and not as nice as the lodge we stayed in last time, but actually it was lovely! It’s all open plan so I am currently sat on the bed writing this, and I can still see the TV in the lounge area (not that anything is on – this is why we don’t have a TV licence!). The kitchen is the perfect size for two people, with lots of storage and even a skinny little dishwasher which is a godsend when you can’t be bothered to do the dishes. It has a jet bath with a shower, a Tassimo coffee machine, and plenty of space in the apartment. 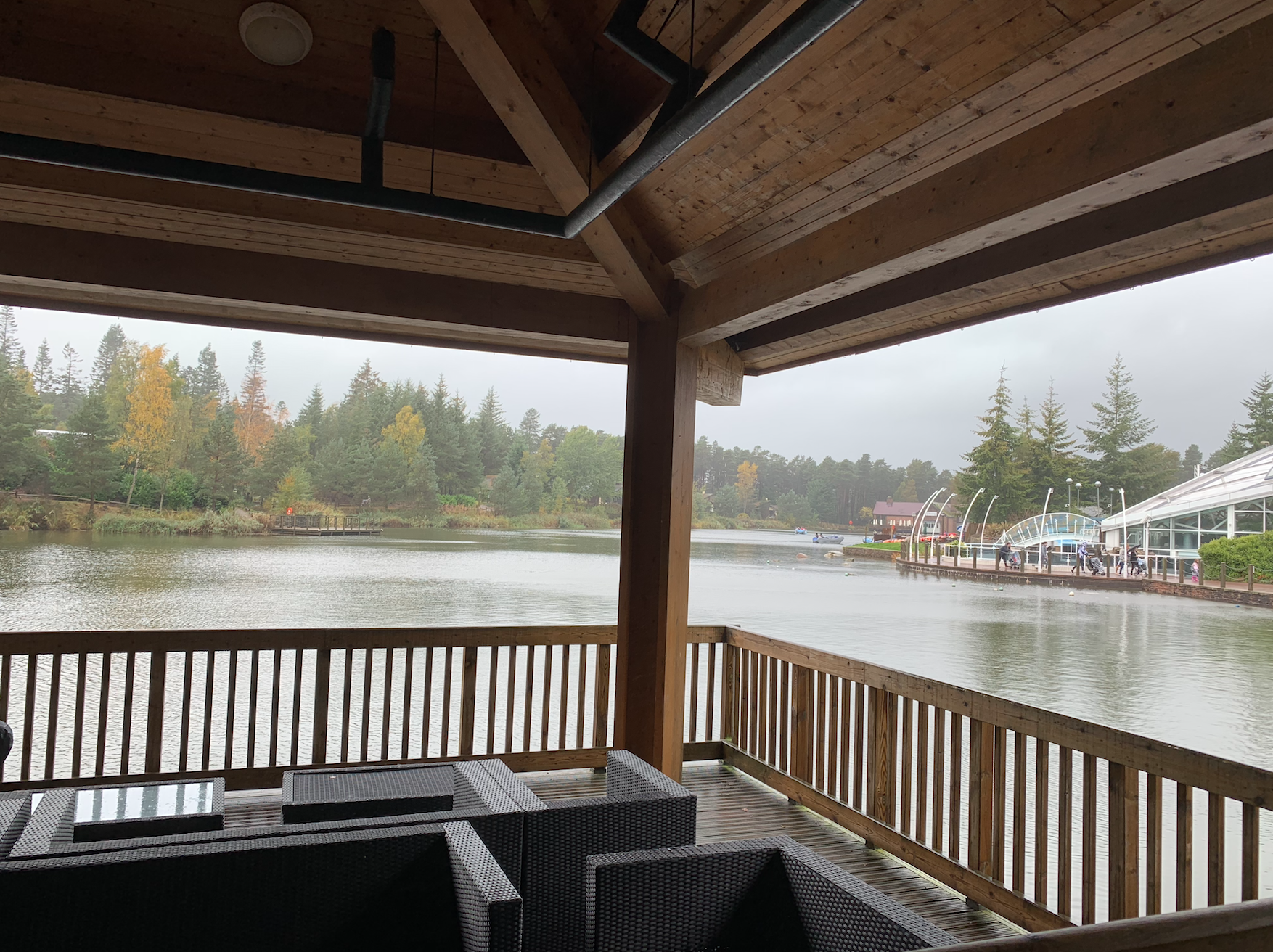 When we checked in, the lady was really lovely and as we had booked on the day we didn’t have an apartment allocated to us. She asked if we had any preference and as it takes me ages to do stairs at the moment, I asked if we could be ground floor which was perfect. The Lakeside Apartments are so close to the two centres too which meant that we have been able to get out and about plenty while we’ve been here.

On the second day, there was a knock at the door and we had a little bear and card delivered from Guest Services to wish us well with the baby. It was so kind and thoughtful and I can only presume it was organised by the lovely lady who checked us in. The customer service has been fantastic the whole time, we’ve really been looked after and everyone from the ice-cream servers (yep. I have had two since being here despite the rain) to the security guards have gone above and beyond.

For example, baby Wright decided not to move for a whole day on Saturday which led to us calling 111 in the evening, searching for the closest maternity ward. As you’ll know if you’ve been to Centre Parcs, you are able to drop things off with your car by your accommodation but then it has to go into the carpark. This was quite a while away in the dark and the rain with a pregnant woman so Steven called security to see if they would be willing to give us a lift. They were so kind and helpful and arrived in less than 5 minutes. They took us straight to the car and didn’t make us feel like a burden at all. Kindness like that when we were feeling a little anxious meant so much.

There are so many activities to do at Centre Parcs and last time did pottery painting, badminton and roller-skating. This time, however, we just enjoyed the nature walks. We did pop into the pool both times and this time it was like heaven. I’ve not been “swimming” since the last time we were here (I say “swimming” as I cannot actually swim, and its more of a play pool), but I wish I had as I felt so light with the weight off my bump – it was amazing! The pool is nice and warm and I love the river rapids. We just had fun bobbing around and laughing and it’s free to go into which I love.

We also ate a lot of food. The first day we ordered in from the on-site take out and it was fantastic. I got a veggie chow mien and Steven got a Thai green curry, plus we shared some spring rolls. We ended up picking it up from the place as delivery was going to be a lot longer but it was no trouble. 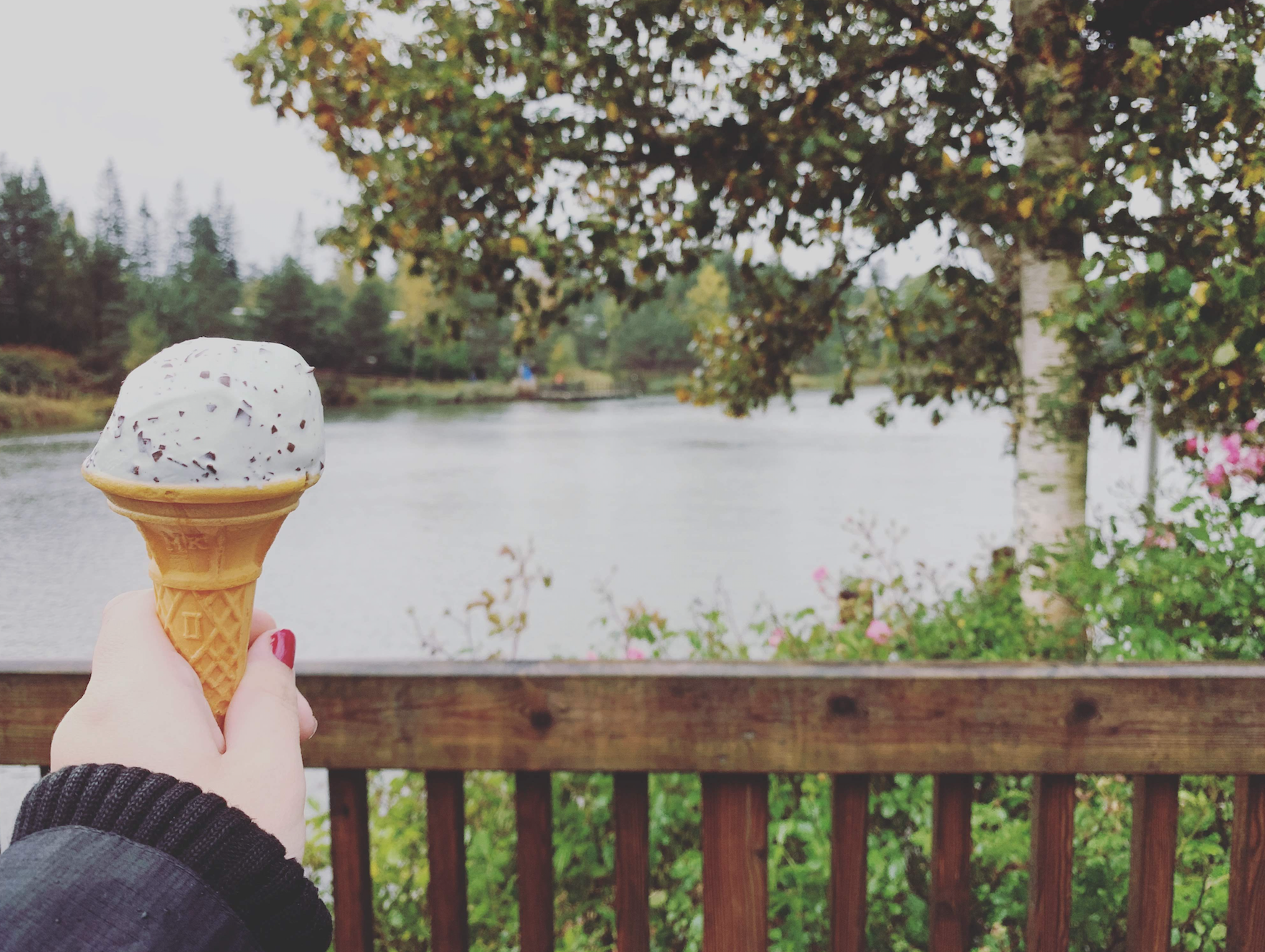 The second day we wanted to try the big Indian meal which was £25 each and included ALL OF THE FOOD. When we went to book on, however, there were only one person slots so we thought we’d go and talk to them and see if they could squeeze us in. As it was the menu launch night and they were short staffed (as was every food place we went in all weekend), they couldn’t. We were gutted but popped to the supermarket on site and managed to get two boxes of Indian sides, rice, naan breads, tikka sauce, chickpeas, spinach, 2 cartons of fresh OJ, a Cobra for Steven and an alcohol free cider for me for less than £25 so it worked out well in the end!

Sunday morning we went to the Pancake House which was packed, however we were given a buzzer and only had to wait 10 minutes or so for a table. You could get sweet or savory pancakes and I am 100% sweet so I went for the Black forrest American pancakes, while Steven had a Farmer savoury pancake which had mushrooms and other things that do not belong in pancakes – but we both enjoyed them.

In the afternoon we went to the Sports Bar and Steven had cheese and onion loaded fries with a Mac ’n’ Cheese melt and I had a chickpea burger. The good side was that there were 2 veggie burger options which is very rare, but none of our food was that great and we ended up leaving some. We did however both go for fruit drinks which were a bit like mocktails and they were fantastic. 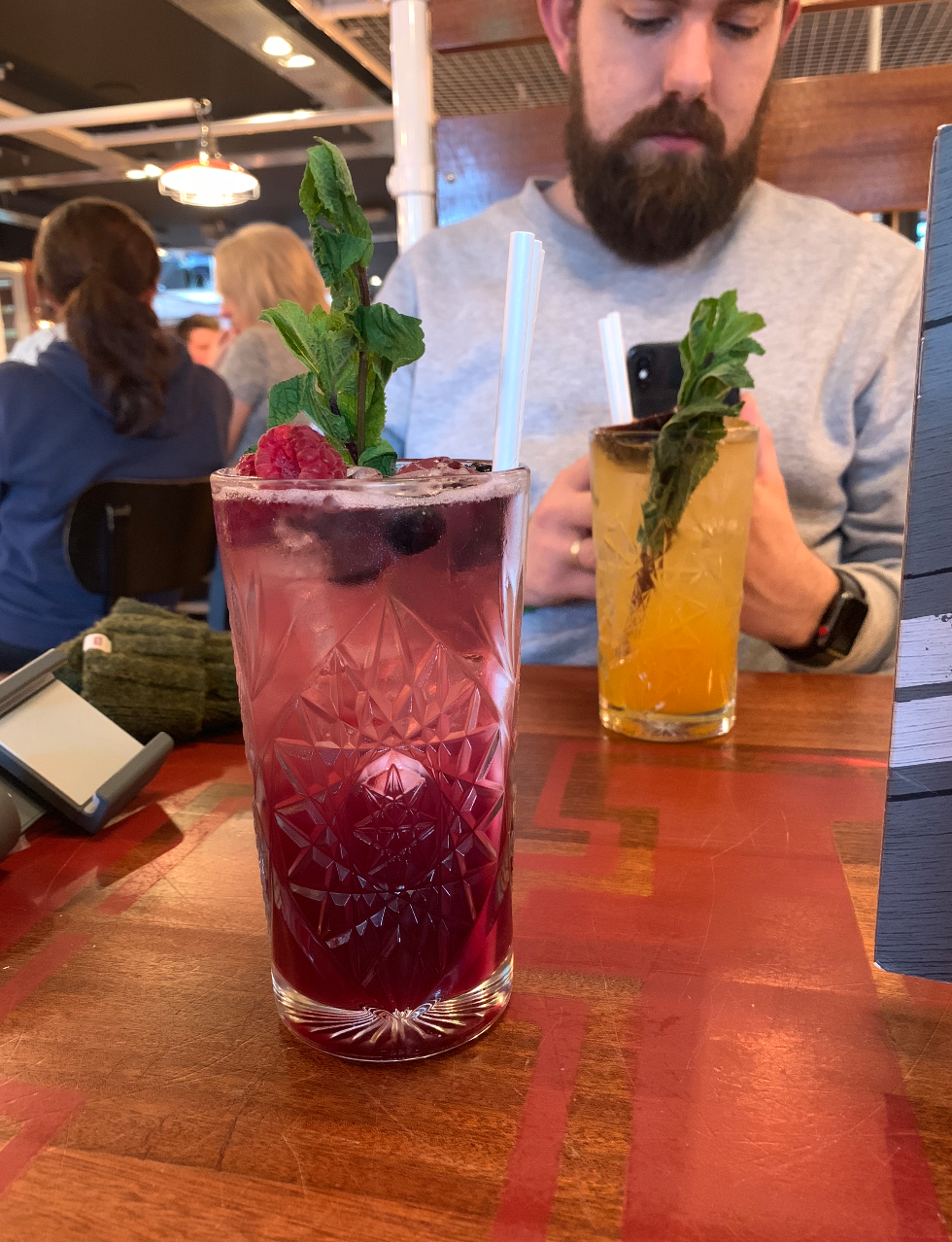 So, food wise it was a bit of a mixed bag but there are so many options onsite you can easily find something you enjoy. Make sure you book online if you want to actually get a table!

For a baby moon, Centre Parcs is such a good location. The accommodation is nice enough that if you want to stay inside all day and just hang out then it’s perfect, but also anything you want to do is all on site so you can be as active or chilled as you want. Last time we did the spa and I had a maternity massage which was so nice.

It was so lovely to be cozy inside while the rain lashed it down outside. We had a few walks around the beautiful grounds and spent some time looking in the cute little shops. We ate food and napped and finished Season 3 of Friday Night Dinners and even recorded a Youtube video. I wouldn’t say I feel any more ready to birth and take care of a tiny precious little human in a few weeks but it’s been a really great weekend – bring it on!