I love me some crafts. We have an entire room dedicated to it in our house and a huge amount of my paycheck goes on craft supplies “for the wedding”, so when stationary bosses Viking got in touch and invited me to a crafternoon with coffee and cakes, you better believe I was all over that! 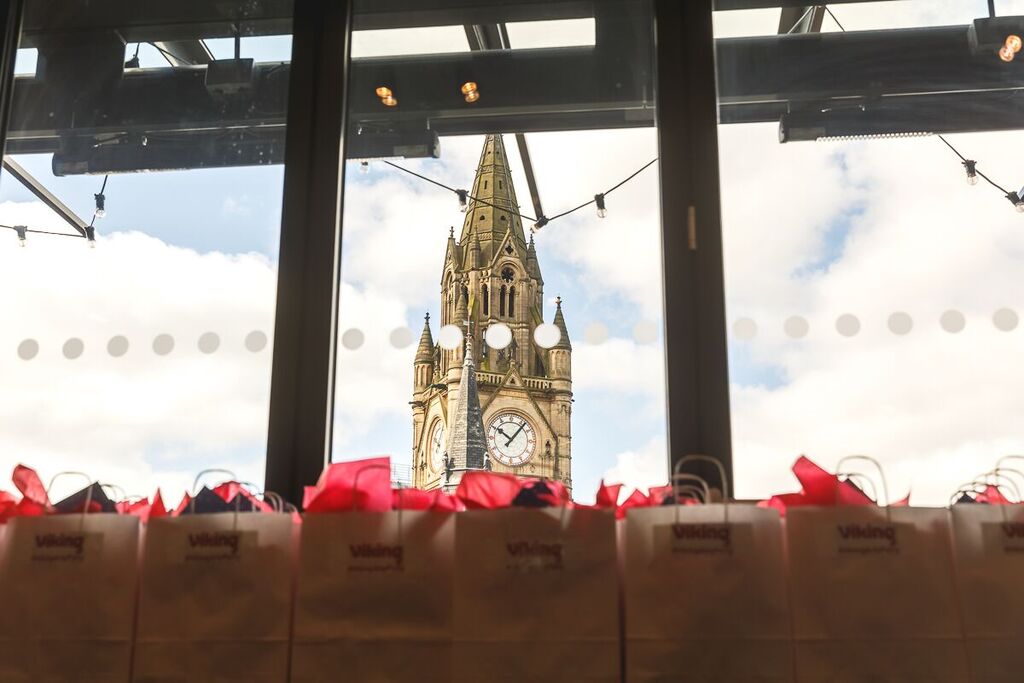 The workshops were in the beautiful King Street Townhouse which provided an incredible view across Manchester. As soon as we walked in, we were greeted with a bag of sweets, and tea and coffee – wonderful! 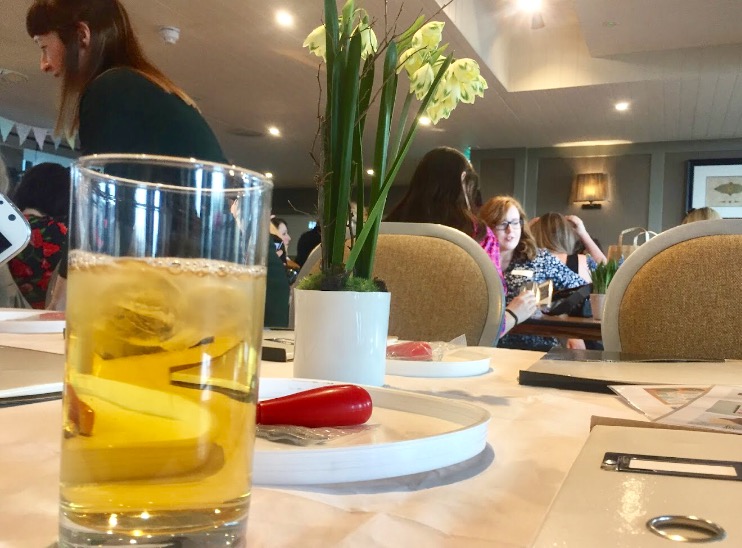 There were three separated tables, each with a different craft on.

Block Printing by Stacey from The Crafty Hen

Calligraphy with Joyce from Artsynibs

Notebook Customisation from Chloe, also from the Crafty Hen. 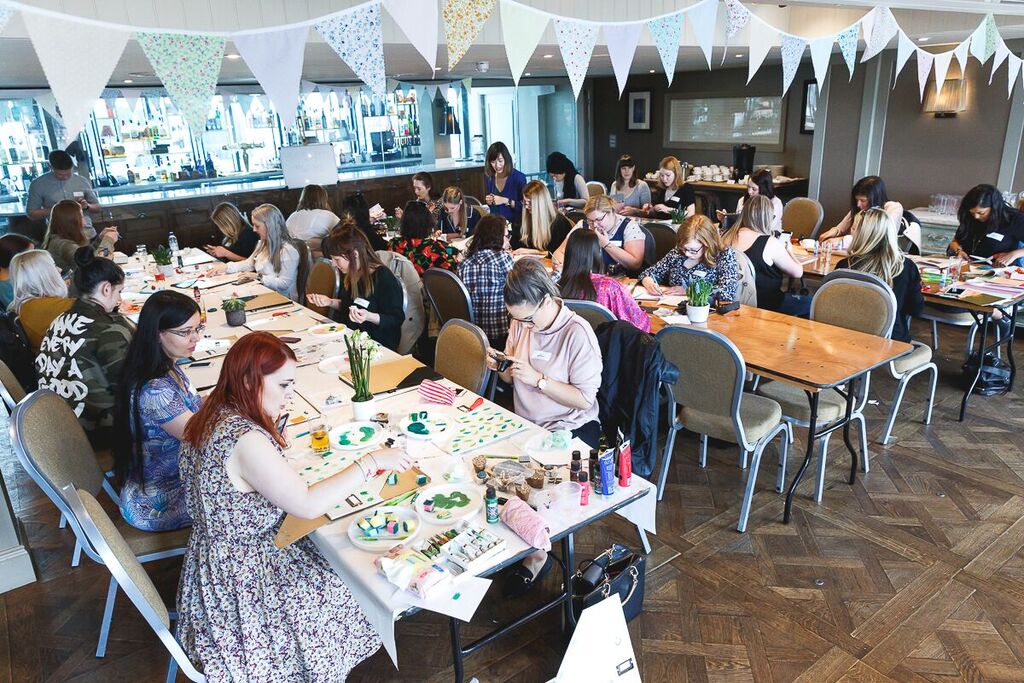 We were split into three groups and worked on rotation, which meant we were in small enough groups to be able to follow the craft, but we were also all mixed up, which allowed us to meet new bloggers.

I began at block printing and this was probably one of my favourites! We used erasers to create a really simple design and make our own rubber stamp. The carving tools were easy enough to use once you had got the hang of it, and it was really therapeutic. 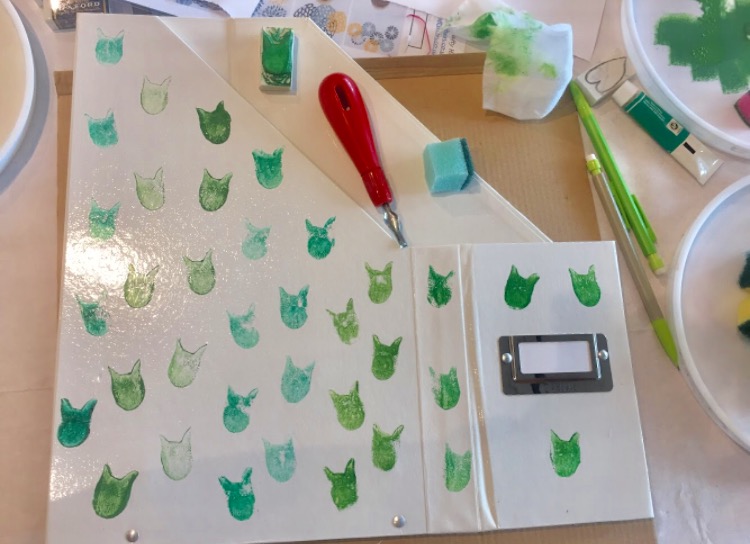 No surprises that I chose a cat for my stamp – or at least, that’s what it was supposed to be!

This was so easy to do that I am going to give it another go myself one day, and perhaps decorate some more folders!

We then took a quick break for lunch which for the veggies was an amazing pasty! It was huge and so filling, and I even grabbed a bit of hummus too which was lovely! I got to sit outside on the balcony with some pals and have a nice chat too. 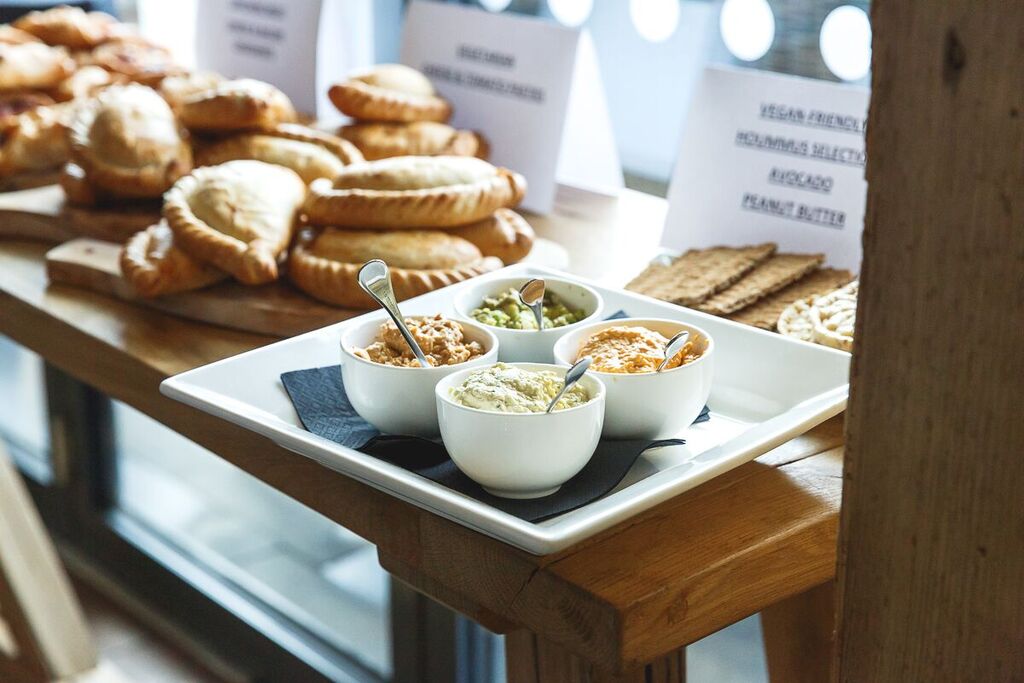 Next I was on to calligraphy.

My handwriting is horrific. It always has been. I’d like to say that my brain runs too fast for my hand but that is probably not true. When I was in primary school, while everyone else graduated to using fountain pens (like bloody Harry Potter!), I had to use a pencil as I “couldn’t be trusted”. I will admit, I kinda get it. So although I was sceptical that I would even be able to form shapes with the calligraphy pen, I was willing to try. There’s a few bits of writing that need doing for The Wedding, and it would be great if I could do them myself. 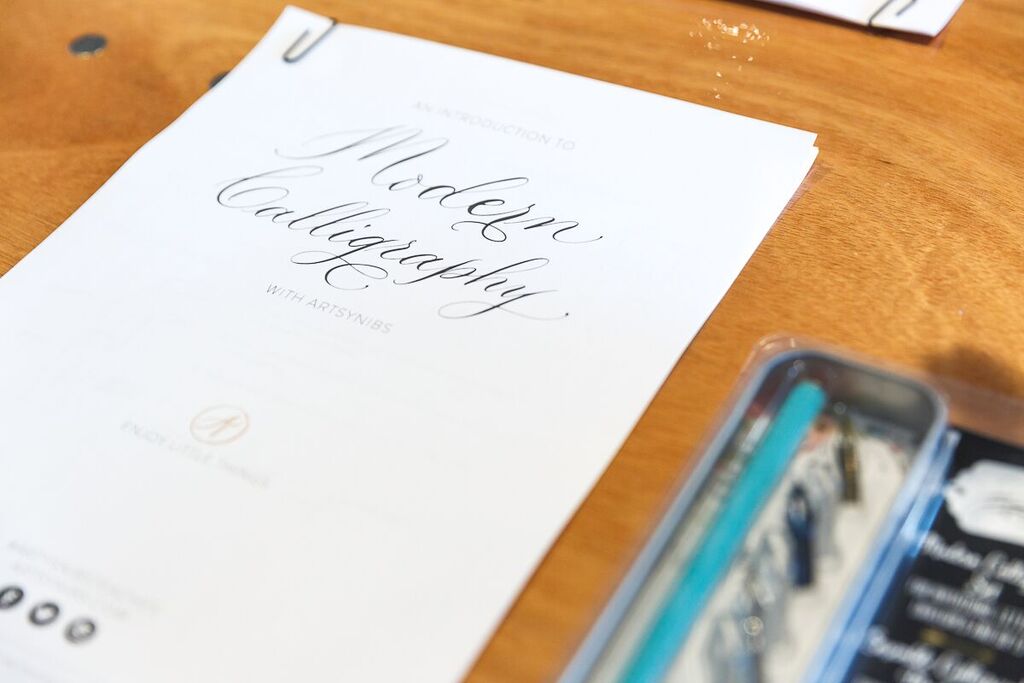 There is a lot more to calligraphy than an Insta-ready pen set and some nice flicks! It starts from your seating position, to how you hold the pen and the speed you use. You are supposed to use more pressure on the downstroke which is what makes some bits thicker than the others. 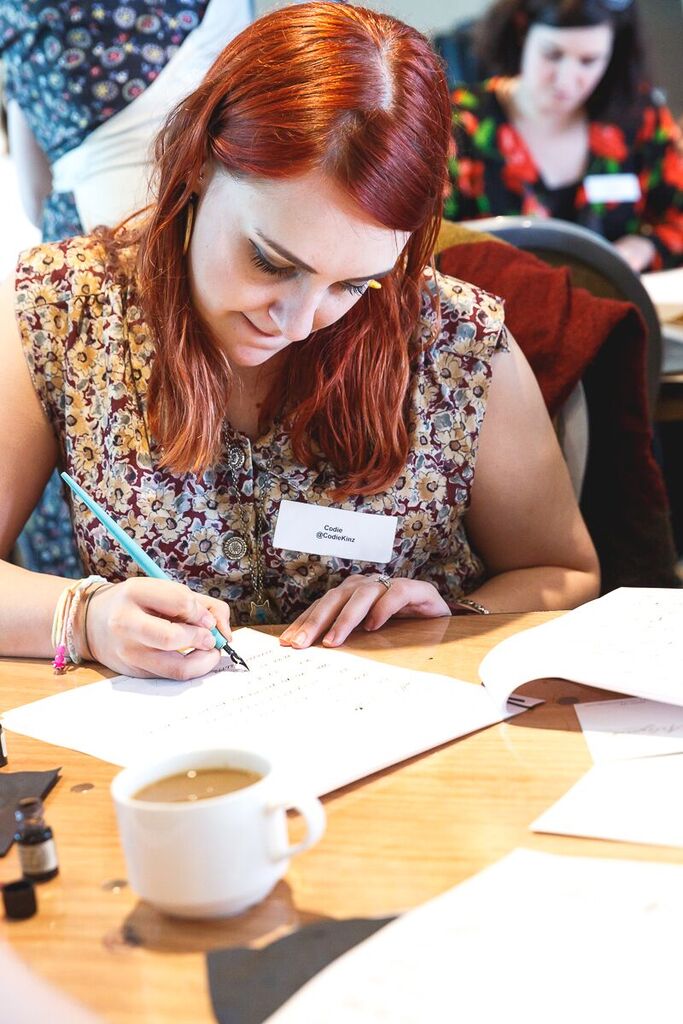 We were given worksheets to have a go at, and I got a little frustrated. Thankfully, Jocye was really patient and I started to see something resembling letters, albeit very wobbly. It was exciting to see how everyone was getting on, as this wasn’t like the other workstations where creativity was the key, and yet every body’s sheets looked different. 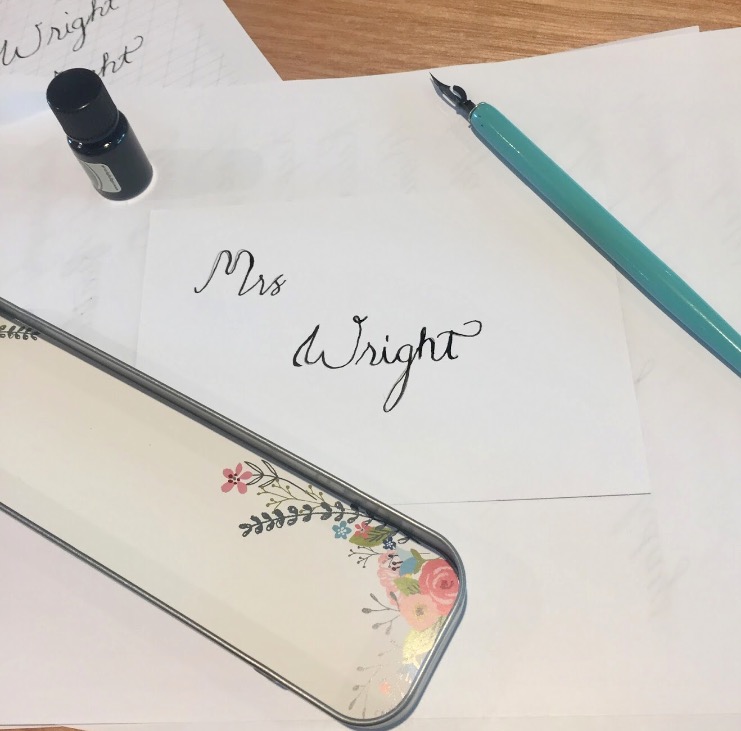 Joyce was kind enough to give us each one of her brand spanking new pen sets, and I am determined to at least improve a little in the next few months. Otherwise it is a waste of a gorgeous pen!

My final stop was the notebook customisation.

You made have noticed that I am wedding crazy at the moment (only a few weeks to go!) and so I wanted to make a cute wedding notebook for my various scribbled notes and long todo lists. We were given pretty much free reign with this craft, and there was a lot of different wash tapes and papers for us to use (although as we were the last group, some things had already run out!). 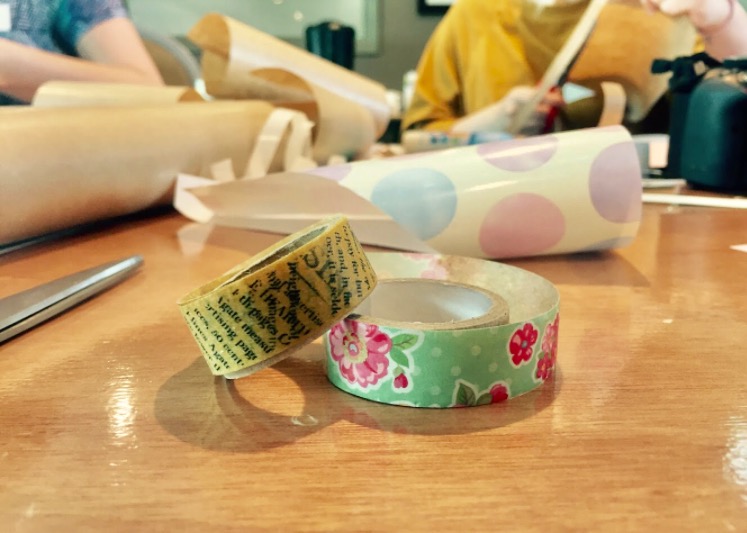 Chloe showed us how to wrap our books neatly (although neatness is not my style!) and even how to add a little pocket to keep little notes in which was really cool. I even managed to make a ribbon bookmark and add a little bit of gold lead detailing – so cute! 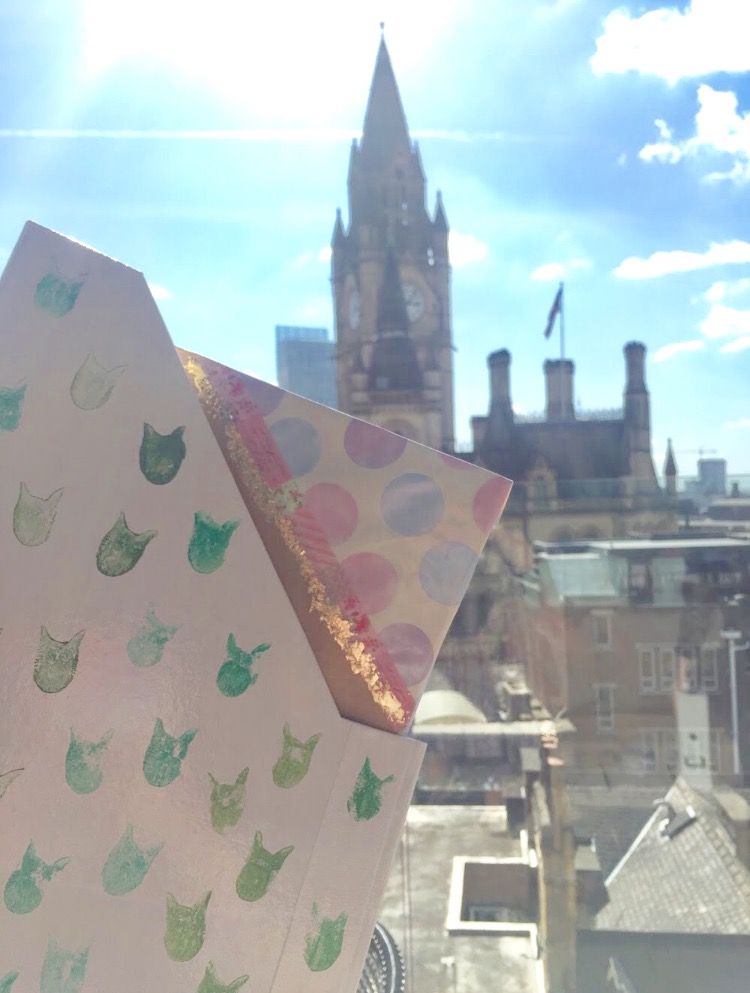 I did spend a lot of the day in a perpetual mood of “That looks amazing/what didn’t I think of that?!/Why didn’t mine turn out that great?!”, but it was great to see how different everyones designs were – some were so great that they could have been sold!

I can’t say the same for my own projects but it was a lovely way to spend an afternoon – it’s been a while since I spent some time just being creative for the sake of it and it was well needed!

A massive thank you to Viking for inviting me and Joyce, Stacey and Chloe for hosting the workshops. It was so much fun!

*Shout out to Matt and Viking for letting me use some of their pictures (it will be clear which ones I took and which ones Matt took!), as I was far too busy having fun to take snapshots of everything!