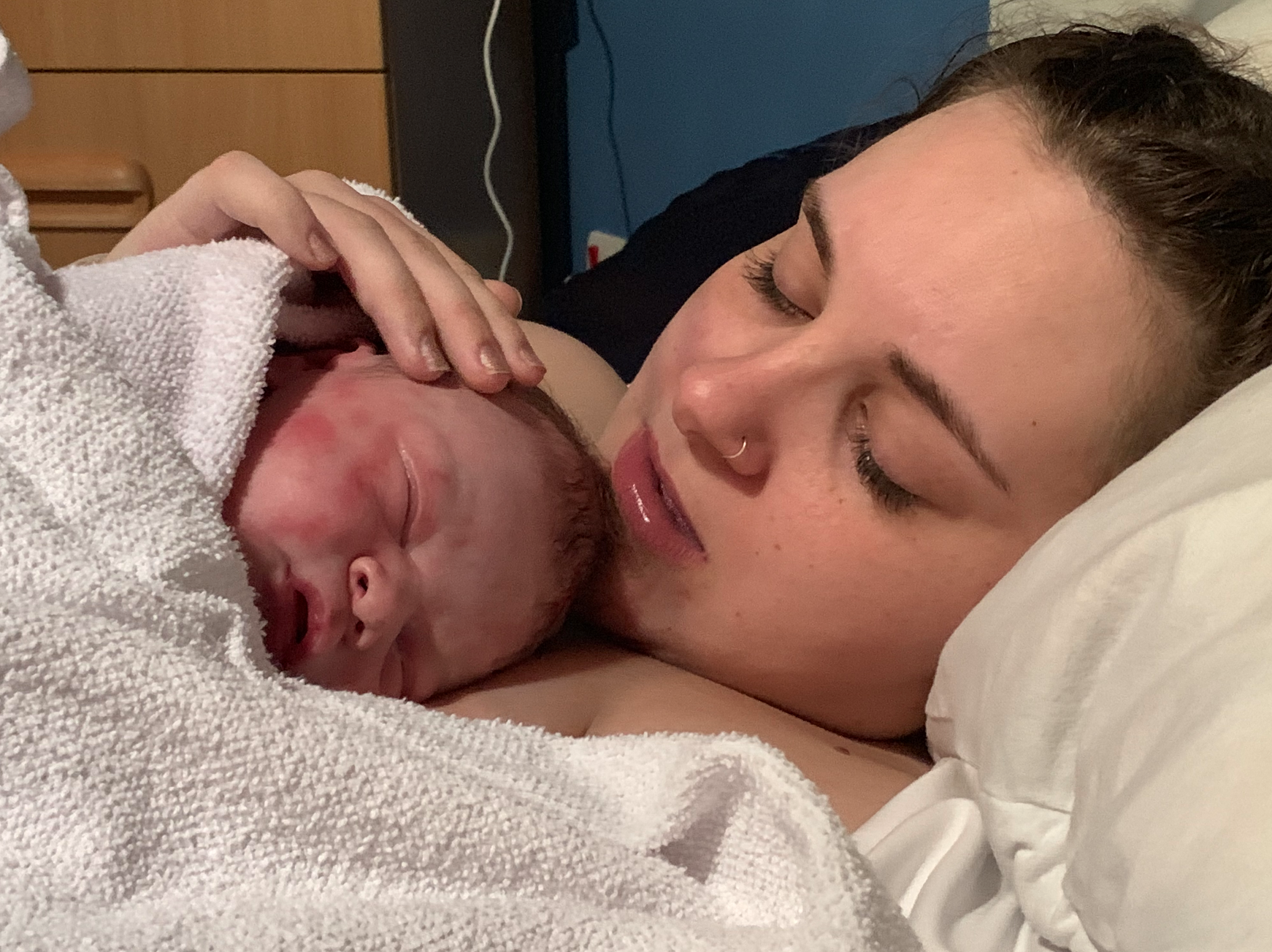 I can’t believe that it’s been a week since this tiny whirlwind came into our lives, and made me a Mum. This is the first time I’ve been able to crack my laptop out and do something just for me and it feels so weird. I feel a little lost without a baby attached to my nipples, or in my arms. In fact he’s laid right next to me and every few words I type, I’ll watch him for a few seconds to make sure he’s okay. This is my life now.

So how has the first week been? 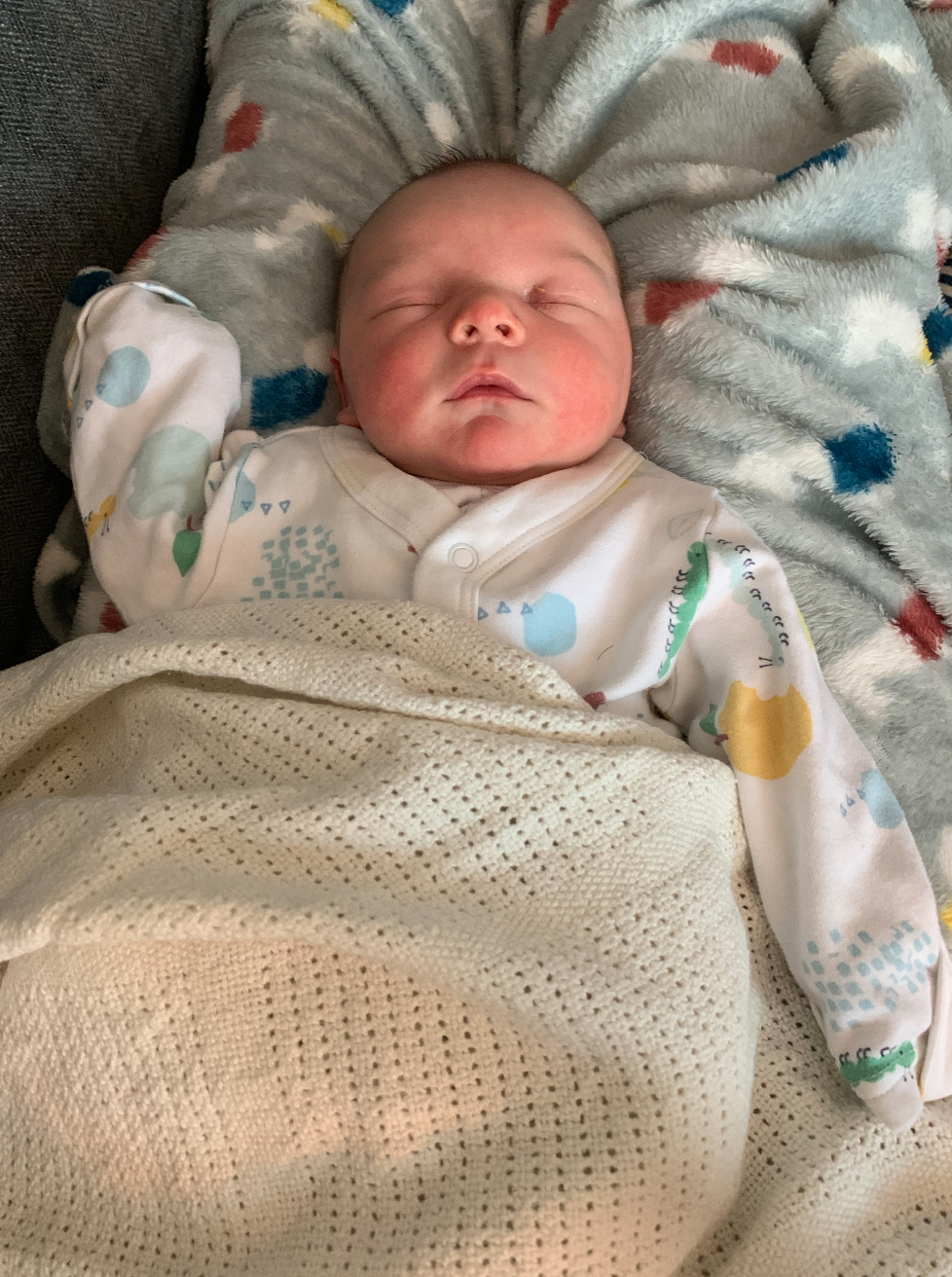 I feel so lucky that we had such a great birth – it didn’t feel like it at the time, but in the grand scheme of things, my labour and birth was pretty good, especially for a first time Mum with a back-to-back baby. Although my body is still very much recovering – I’m still losing blood, my hips are still sore, I have a constant headache, and breast feeding causes my womb to contract which is great, but also uncomfortable – I’ve not had to deal with things like stitches or a C-section scar, so for that I feel so grateful.

That said, it’s not been easy. The lack of sleep has felt like torture at times. The first two nights after we got home, Ruben wouldn’t settle unless he was on me. I had been awake for 3 days in labour and so I was terrified of falling asleep holding him. I cried because it just seemed never ending.

We ended up in hospital on one of the days and that was a bit of a turning point for us all. Poor Roo had a temperature and a rash and so we were terrified. Thankfully it turned out to be nothing but we had to stay in to be observed. Once we were settled in our room, I held him and sobbed my heart out. I couldn’t work out why he wouldn’t allow me to put him down. Everyone we had seen had said we were nailing breast feeding, but still I couldn’t manage to lay him down in a cot to allow myself a few minutes rest. It was horrific. I kept apologising to him, and Steven, and soaking us all in my tears. It was v dramatic. 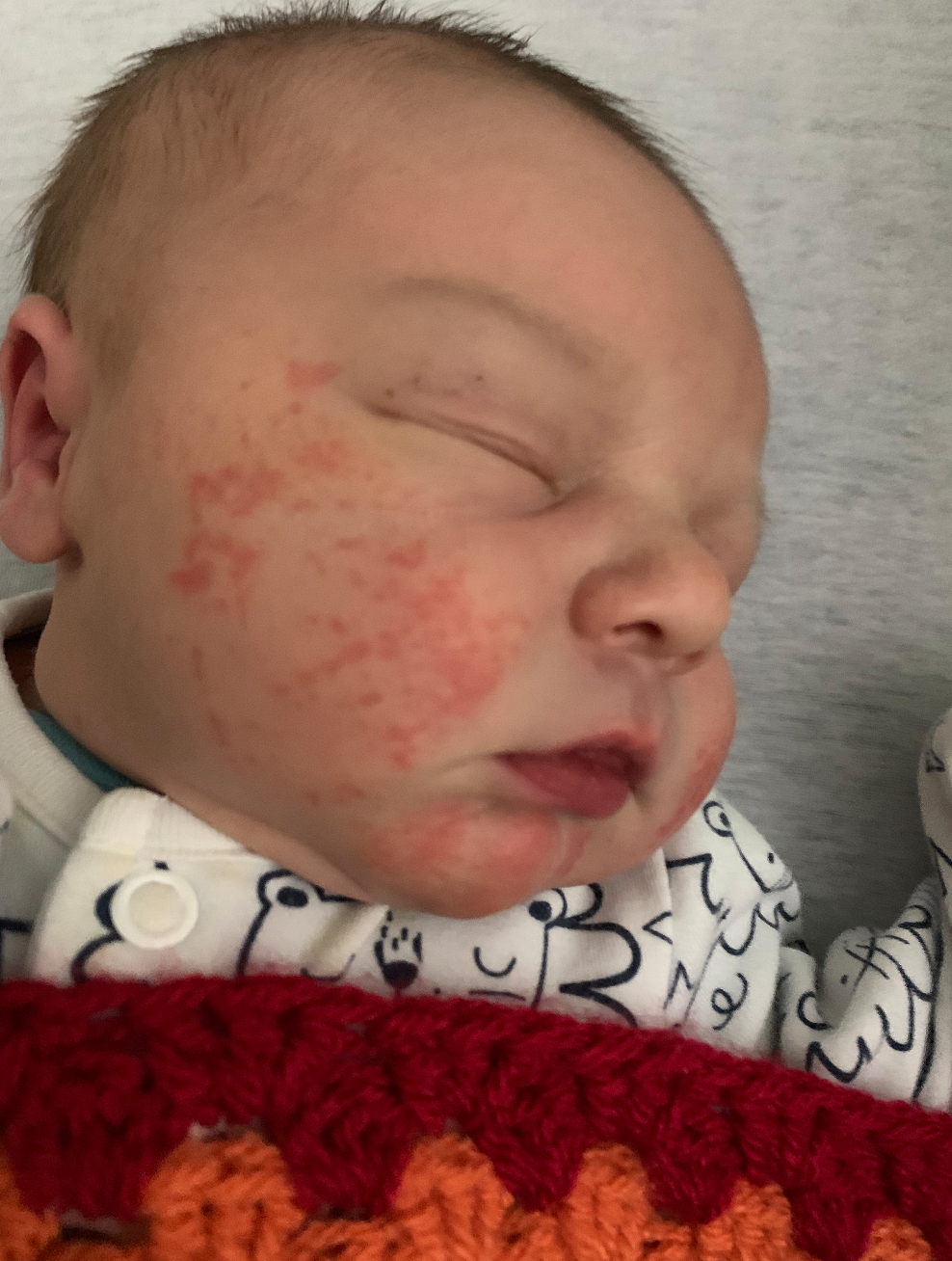 We called a nurse in and I explained what was happening. She was really kinda and suggested that I express some milk so that one of the health care assistants could watch him for us so we could get some sleep. I felt like a failure of a mother, but I also knew I wasn’t safe to be holding him when I was so exhausted so I let them take him. It was heartbreaking, but in hindsight it was for the best. Steven and I managed a hour or so sleep and we felt so much better.

Since then, we have developed a very loose method for dealing with it. During the night he feeds so much more, so it’s really only me that can do anything. Steven is always on hand for when I need extra assistance with a particularly awful nappy or just some moral support, but generally, he sleeps during the night and I try to catch little snatches whenever Ruben settles in his SnuzPod. Then anywhere between 4am – 7am when Steven is awake, I’ll do a last feed and Steven will take Roo downstairs so I can get some sleep. He tends to do a lot of skin to skin at this point which they both absolutely love and it’s great bonding time for them – plus I can rest because I know that they’re okay together. If he needs boobin’ while they’re downstairs, Steven will bring him up and I’ll do a sleepy feed, laying on my side. I know Steven is awake enough at this point to make sure I don’t roll over, but I’m always awake and aware of him anyway. 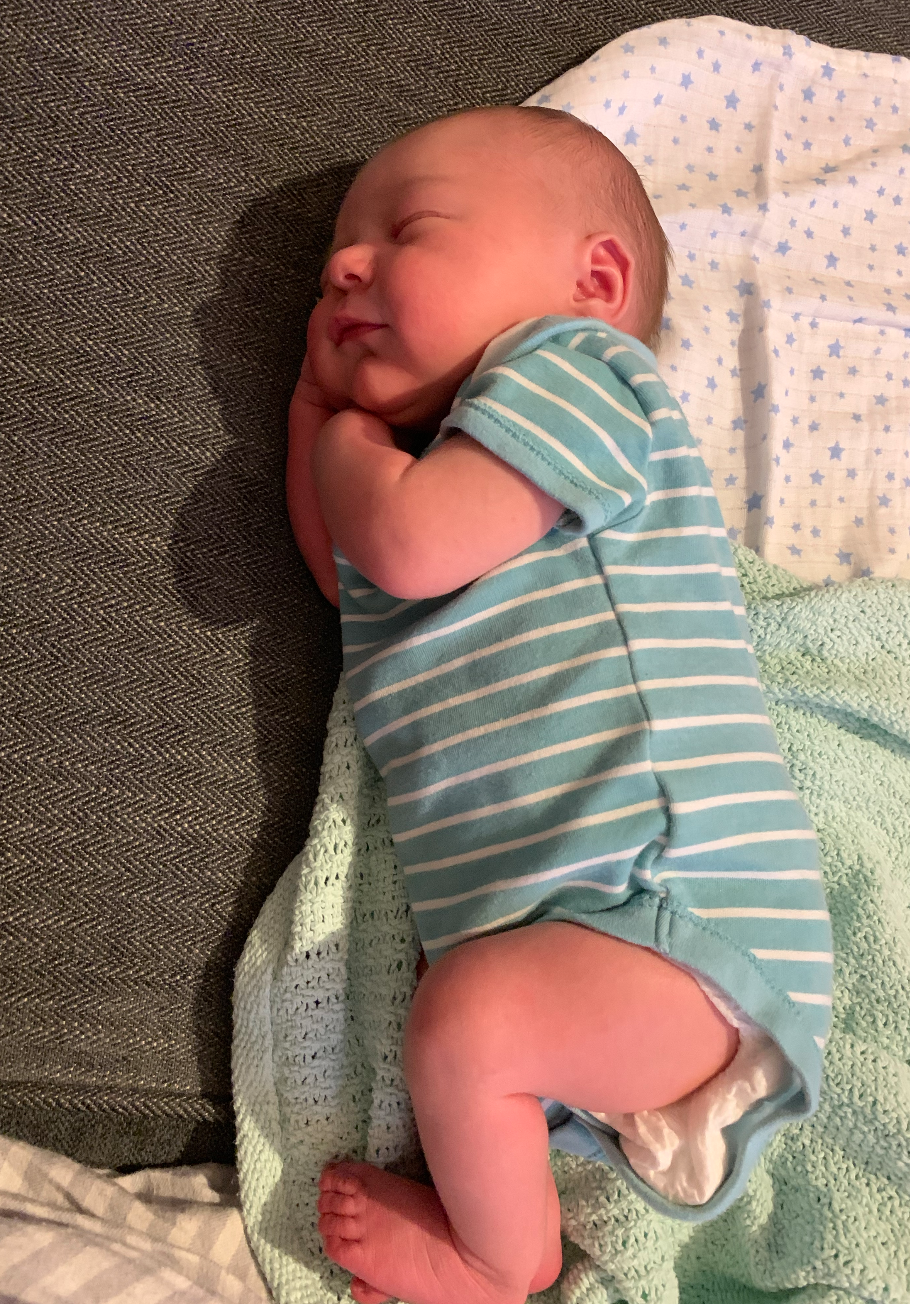 This is such a massive help as it means I get some time to sleep without being too anxious. I’m still constantly listening out for the sound of him crying, but I know that it’s not down to me to settle him, so that helps.

Steven hasn’t been coping with the lack of sleep very well – he’s been sleep-Dad’ing! Like sleep walking but only things to do with Roo, like heading downstairs to get the hospital notes, or grabbing me the changing mat for no reason. It’s very cute! We’ve mostly kept our shit with each other too which I think is impressive, considering I’m a mess of emotions and we’re both sleep deprived!

It’s been amazing having Ruben here finally. It’s different to how I imagined, but absolutely incredible. Steven’s bond with him is so wonderful – he was worried that he wouldn’t connect to a newborn very well, and was waiting for him to get bigger, but actually they’ve both fallen in love with each other and it’s magical. 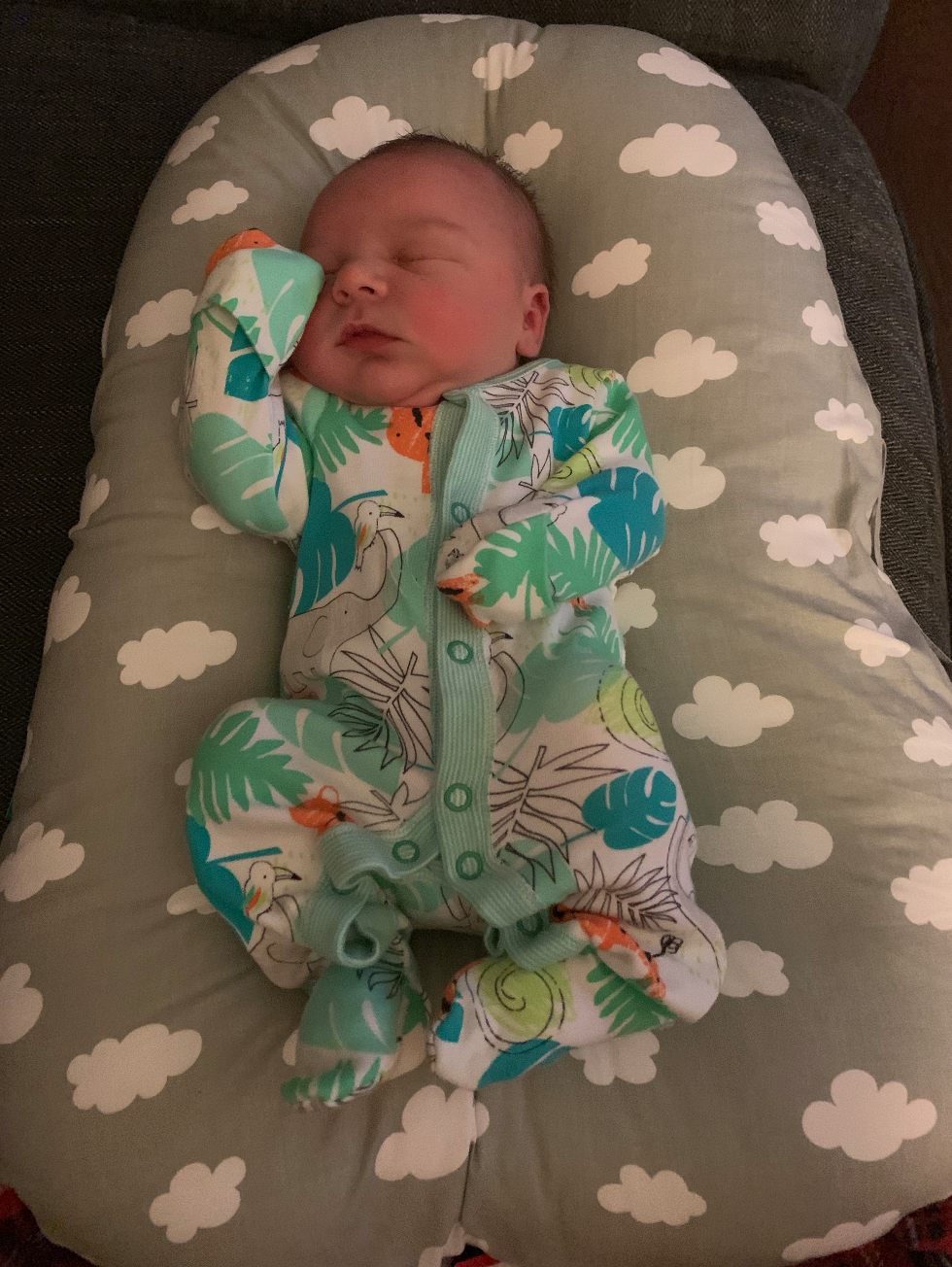 It feels so weird being a Mummy. It’s not quite how I imagined it – I’m not a domestic Goddess, I’m just a milk machine at the moment, but it’s also so rewarding. Being able to settle him, or knowing that it’s my body producing the milk that’s helping him thrive is pretty incredible. He only lost 1% of his birth weight at his 5 day check up, whereas often it can be around 5-10% so that was an amazing boost. But other times I sit and sob onto his soft little head because I don’t feel good enough for him and Steven. And that’s really bloody hard. Especially when we wished for this little miracle and I’m so lucky he’s here, but the world also feels terrifying and I just want to protect him from everything, but at the same time, I’m worried that I’m no longer me.

We’ve taken him out to town Christmas shopping, to the dentist (for me, not him!) and to a festive quiz event, but it’s been much harder than I thought it would be. I still want to do lots with him, as he’s been super chilled about it all, and I think it’s good to get out and about but Steven & I have been nervous wrecks!

Steven has been so supportive. He’s been keeping up with my medication (I’m on antibiotics from the dentist and I can’t tell my arse from my elbow so he is tracking the timings), and giving me reassurance when I’m having a little wobble. He tells me constantly how well I’m doing and how proud he is of me, and although I don’t often believe it, I do appreciate it. 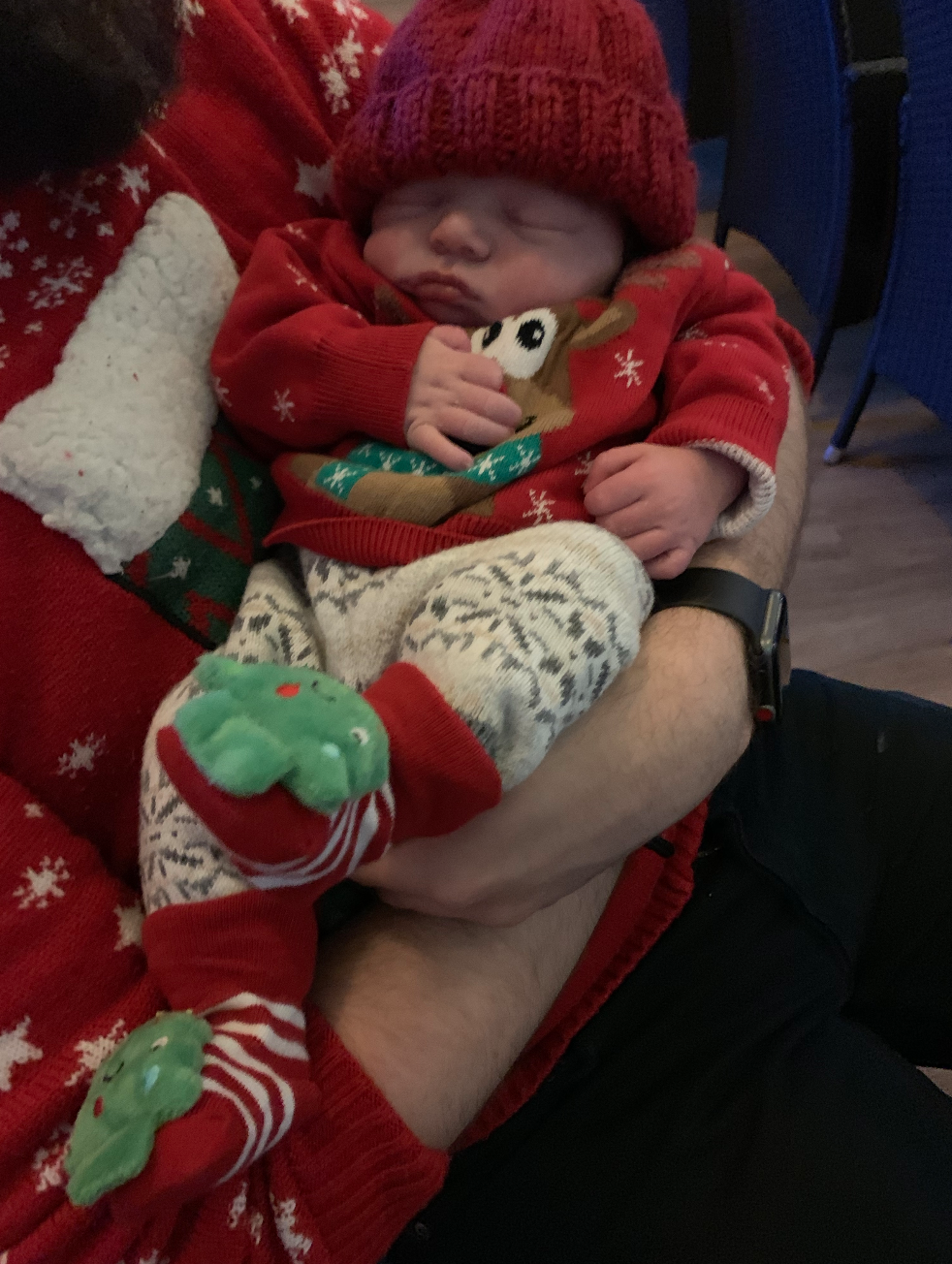 This has turned out a lot longer than I planned, but it’s also been very cathartic. However it’s almost time for another feed, so I’ll leave this here for now. I’m going to do a (video maybe?) about my birth story as I know that’s something I find interesting, so watch this space.

Thank you to everyone who sent a kind message, and even cards and gifts. We are so lucky to be surrounded by so much love and support – now, if any of you want to do the 3am feed, you’re more than welcome.