Those of you who have been following my Instagram stories will know that I am currently trying (and failing) to buy a house. I know that this stuff is supposed to be stressful, but I hadn’t quite realised how many tears I would shed over it and how many times I would angrily shout at the Rightmove mobile phone app “Why would you make a house look so bloody ugly?!”.

Let’s start with some background. We currently live in Steven’s grandma’s house and our rent goes to her, which we love because we’re not helping some greasy landlord go on his fifth holiday of the year. However, Grandma suddenly passed away while we were in Vegas and so we have decided to move out. Steven’s parents are our landlords (which is amazing because anything that goes wrong with the house is fixed immediately and they let us do any of the crazy ideas we have in the house), and so they are not kicking us out, we know we can stay as long as we like, but we think it’s time to move on. Our current house is great, but it’s not ideal for us. The bathroom is downstairs, behind the kitchen which is a daily irritation, and if we were to have a baby any time soon, we would have nowhere to put it!

I’m also a girl with perpetual itchy feet. Now we’re married, we want somewhere that is ours, that we can decorate together in cute paint-splotching montages while wearing splattered overalls.

This is where it gets difficult. Steven and I both work from home, him more than me but one day I plan to be fully freelance again and so we both need an office. More than that, I have a huge craft wardrobe and Steven has a buttload of photography equipment that he needs for his job. We both want a room we can shut the door on when “work time” is over (which seems to be never at the moment!), and that we don’t have to walk through constantly like we did when his office was in the dining room.

So, we thought we’d found the perfect property. It was a beautiful new build (but done by an independent father and son team, so it wasn’t tiny like the other ones we’ve seen done by big companies), and everything about it was perfect. It was 3 stories and all 4 bedrooms were the same size so we could each have an office, our own room and a future baby bedroom. The garden was the perfect size and the kitchen was beautiful. We put an offer in and had it accepted.

i danced around the kitchen with Squidge when I heard the news and as far as I was concerned, things were a go.

But of course, sometimes life has a way of shitting on your dreams.

The mortgage man called and told us that actually, the deposit on this property, being a new build, would be fifteen bloody percent! With fees and stamp duty etc, that would be a disgusting £30K! Gross.

He then also told us that he’d calculated our mortgage amount wrong and because Steven was an employee of a business he is the MD and owner of (I don’t know man, this is all complicated), they couldn’t just take this year’s salary, they had to average out the last two years. Sigh.

We had found a loophole where another properly done by the father and son had been rented out for a few months, making it no longer a new build. A few things were not quite as polished as the first one (the bathroom suite was basic rather than super fancy but really, who cares?!) but it would mean we could get it for the 10% deposit – yay! That said, when we found out our new mortgage amount, the difference between what we could borrow + deposit and the actual amount would work out the same as having a 15% deposit on the other one. Ugh.

(Are you still with me? It’s been a rollercoaster!).

So a full team of us kept scouring the Rightmove app. My one main stipulation is that the bathroom should be upstairs. We need offices and I would like a nice kitchen. Most things can be decorated but if the kitchen is nice to start with, that’s one less thing to do.

When I was growing up, my Step-Dad would knock down walls, buy new bathroom suites and build the foundations of a conservatory. and that’s it. Things would never, ever be finished and it was like living in a building site. Because of this, I am very wary about houses that need work doing to them. Steven on the other hand has come from a home in which his Dad can rip out and install a bathroom in a weekend and always finishes his projects (or woe betide him!). Neither of us can get out of the mindset we have so we are going to have to come up with a compromise for sure!

We found a great house that we loved when we peeked through the windows. It even had an outhouse building that would be easy enough to turn into a full office and storage for Steven – perfect! However, the day before our viewing we were sent an email saying that an offer had been accepted.

Then we came across another really lovely house. It had all been done up and the kitchen was to die for (plus the bathroom was upstairs where it belongs!). There was a huge building in the garden that we could turn into an office and everything seemed promising. I had been to the viewing on my own but everyone loved it from the video so we made another appointment.

As we walked up the path, everyone noted that the floor was sloping. It was even worse inside. This was not something I had noticed and already I felt my dreams slipping away. Again.

Safe to say there were more tears when I realised that this house wasn’t meant to be either. I was already planning the various room decors and how we’d do up the garden. (Well, not us, I’m so not green fingered, but we have a friend who is amazing so we’d pay him instead!)

I know I shouldn’t get carried away and get my hopes up but it’s who I am. I think with my emotions and throw myself into things. It means I always get my heart broken but I’ve always been very emotionally driven and I just can’t see that changing about myself.

So back to the drawing board. Because we thought we’d be moving before Christmas, we’ve been living with a chest of drawers that were ready to collapse at any moment, and without any of the new pictures on the wall. It was like we were living in purgatory. So, on Saturday night, to cheer us up, as we know we’ll be in this house until next year, we decided to buy some new drawers from Ikea. Of course you never come out of Ikea with the one thing you went in for, so we also got a cool shoe cabinet for the hall and a huge mirror (that was down from £80 to £39 with a family card – BOOM!), and started to make things nice. We’re also trying to declutter so that when it comes to moving we will have a lot less crap to come with us. 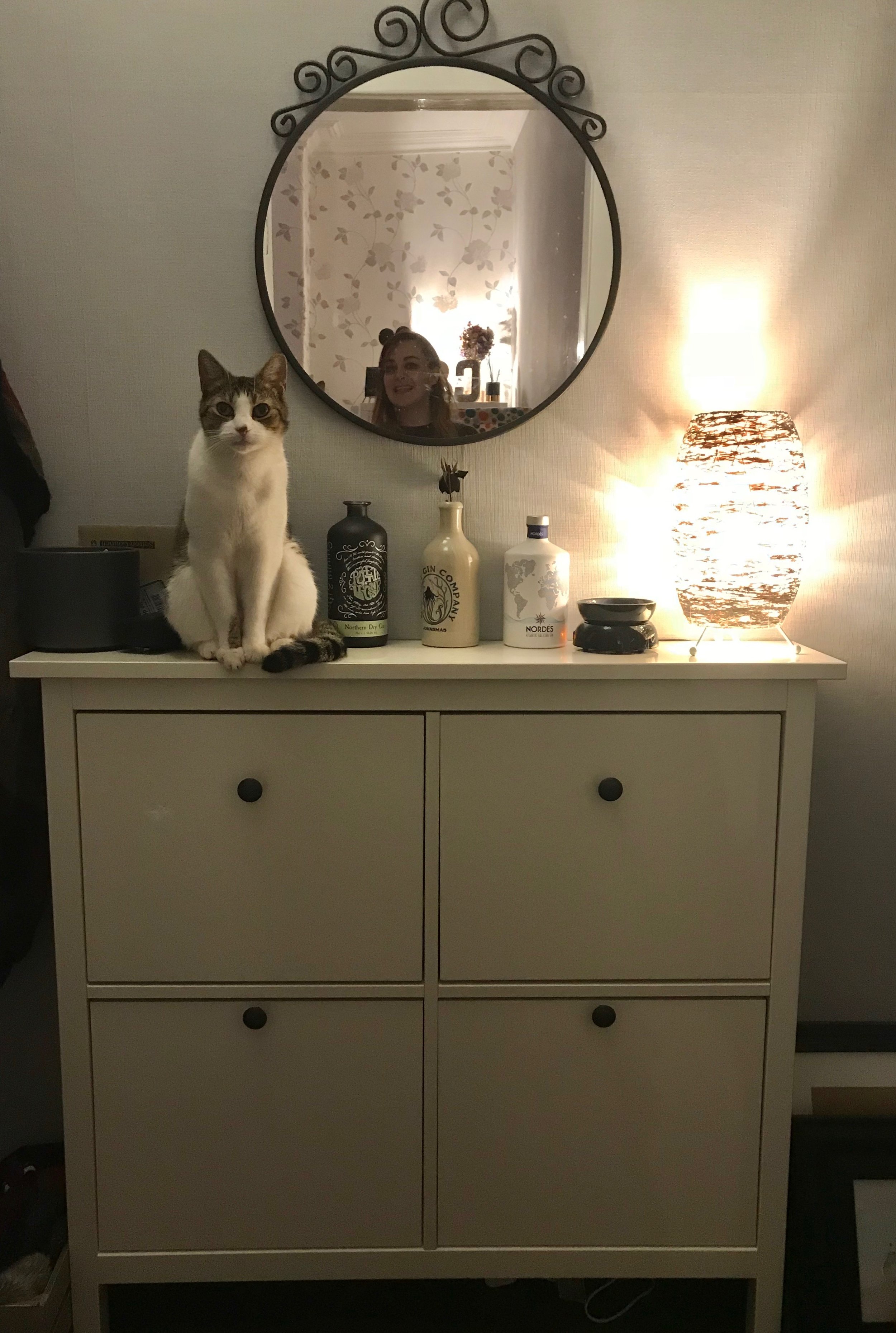 We’re still looking but I’m not feeling too hopeful. I refuse to settle for a house that isn’t exactly what we want because it’s a huge amount of money to spend on something that just feels “meh”. It has to be better than where we live now, otherwise what is the point? In the meantime, I’m going to carry on building up my Pinterest boards and Etsy wish lists, so that as soon as we can, I’m ready to go!