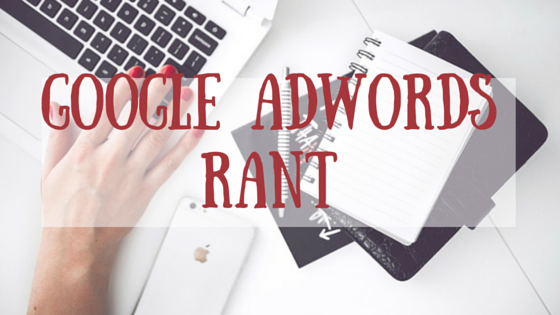 For those of you who come to my blog for Lush reviews and awkward moments, I must apologise as I’m about to get hella ranty and a little technical. However, if you too are a Google AdWords (or BadWords)* user, you might feel some solidarity in my frustration.
*(I originally wanted to call it Ad(non)Sense but then I remembered that it was AdWords, not Adsense so that was a shame)

Let me give some background. In my day job, I work in digital marketing and am an account manager (& all round super hero) for a number of clients. As such, in my longgg list of responsibility is the Google Adwords campaigns.

Now, let me preface this by saying I bloody love Google. I am a strong campaigner for Google Drive (& if you still use local network sharing then I judge you), I love the level of detail in analytics and their whole company ethos is pretty great, it would be an absolute dream to work for them (let’s not mention Google+ – like the estranged cousin nobody ever liked). Google Adwords however, is awful.

But I’m getting ahead of myself.

In order to oversee the several client accounts that I need access to, I must be “invited”, which my boss duly did. So far so good, however, upon clicking the link, I was taken to a sign in page. I attempted to sign in with my company email address, only to be met with the annoying “an account already exists with this email address”.

Now, I’ve never used my work email for an Adwords campaign, so I can only assume that when setting up my Google account, I ticked some box that said I wanted to use ALL OF THE THINGS.

My colleague had had the same issue not an hour before, and after calling Google directly, had a solution. Yay.

So I called. I said the same things. I, however, was told “oh no, it’s impossible to disconnect your email address with that account and attach it to your company one”. Let me remind you here, that the guy sitting opposite me had JUST had this “impossible” action performed.

After explaining this, I was suddenly told that “oh. Well it will be the senior team who can do this then” and I was transferred.

Now, I don’t know about you, but my understanding of “senior”, in regards to a job position, is basically, someone who knows their sh*t a lot better and can usually fix issues.

Unfortunately, Google did not get this memo.

The “senior” had no idea what I was talking about (and it wasn’t me, I’m articulate AF, thank you). I was told again, that it wasn’t possible, and I explained, again, that it evidently was.

Thus began the most frustrating conversation of my life. If you’ve seen the 2 Ronnies’ four candles/fork handles sketch, you’ll get a rough idea.

No matter how many times I explained my situation, it was returned with nonsense. I was told I’d need to set up an account. Despite also being told that my account being set up was the reason I couldn’t use my email for another account.

We used screen sharing (thanks Google Hangouts you bro), to no avail.

No matter what happened, the only page I could access was Google Adwords Express (which is like GA’s disease ridden twin) which ONLY gave me the option to create a new ad for my account. That may or may not exist. There was no way of going “home” or seeing my profile. Nothing but creating an advert.

Which I didn’t want to do. I am an account manager. I manage accounts. I don’t need to make an advert for myself.

The cynic inside me would say that this is a clever way of getting me to set up an advert-creating account so that Google can call me up and persuade me that I should be spending money on adverts.

Of course, the optimist in me thinks it’s just a stupid system.

So the lady on the phone is telling my boss to fill in the information and he is getting increasingly frustrated and reluctant to fill in bank details that are not relevant.

After another fun stint on hold (we’ve been on the phone for about an hour at this point), our new Googley-friend says that she can send us an email and if we fill in the information, she can do what we’ve asked.

Except, when we received aforementioned email, it was literally the opposite of what we wanted.

It was asking for information on the last transaction on the account. The account that has never been billed, because technically, it doesn’t even fully exist right now.

It also asked for information on the keywords for any current campaigns. Which I don’t have. Because I’m not running campaigns. Because my account doesn’t exist.

Finally, and this is the kicker, the email ended with “Along with the verification information above, we’ll also need you to specify the email address that you would like us to invite to access the account. Please note this email address cannot be associated with any other AdWords or AdWords Express account.”

Let me just remind you, that I didn’t want anyone to be invited to access the account. Even I didn’t want to access the bloody account. I wanted to remove it. I KNOW that the email address cannot be associated with any other account, because that is the whole reason I called you!

So basically, that was less than helpful.

After explaining so, we were once again put on hold. After listening to the awful tinny music for far too long, and being just moments away from throwing my laptop out of the window, we hung up, taking deep yoga breaths and counting to ten.

The issue was then ignored for a while and left for another days when tensions were not as high and blood had stopped boiling.

However, not an hour later, as I am happily scoffing handfuls of Magic Stars, the phone rings.

Now, in the time between hanging up, and her calling again, my boss and I have trawled chat rooms, clicked random buttons and somehow, managed to set up, and then delete my current account

That thing that was apparently impossible.

So after discussing again the issue, sending an email giving consent to delete my account, I was set up. To be fair, most of it, we did ourselves but I was so relieved that the ordeal was over, I thanked her as if she’d been really helpful.

I know it’s not her fault, I’ve worked in call centres before. But Google, seriously, surely you can afford to hire people who understand your products? Or maybe even just train your staff better (or at all).

The upshot is, I’ve got my manager account all set up with my lovely clients’ details yay. I think I can also safely say, I’ve kissed goodbye any potential jobs that Google we’re going to offer me.