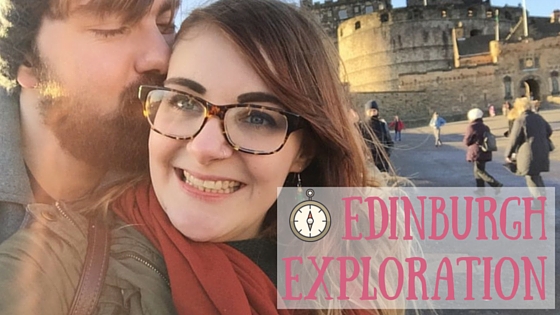 First things first, Edinburgh is equal parts beautiful and hilly. For a girl from the flatlands, with chronic fatigue, this was a bloody struggle at times! But totally worth it!
Steven found the hotel, “Edinburgh Capital Hotel“, and for £113 for two people for two nights it was an absolute steal! We had originally splashed out a cheeky £20 for a welcome basket which included fluffy robes, slippers, wine and chocolates, but when we got there, the lovely lady on reception said that it had not been delivered to the room but she’d try to rectify it. Sadly, she later called to say the robes hadn’t been delivered so they couldn’t do it. This was such a shame as we don’t often go for extras, but to say that this was the only negative from our whole stay is pretty impressive.

The room was huge, clean and comfortable and we couldn’t have asked for more really. We were at the very top because we’d asked for a view and it was totally worth it. The staff were faultless throughout our stay and I wouldn’t hesitate to stay here again.

Honestly, if you’re looking for tips for things to do in Edinburgh, walk. We spent so much time walking (sorry feet!) exploring secret alleyways and just popping into places as we passed, rather than planning. It was really relaxed this way, and Edinburgh is so gorgeous that just looking around is enough!

Of course, we did go to places! We visited Camera Obscura, which is somewhere I was really intrigued by. It’s a little like the science museum but it’s all optical illusions. As we were quite late in the day, we were offered a discount as the Camera Obscura itself only works with a lot of light and so we wouldn’t get the full “show” effect. Add my student discount and instead of £28 it ended up as around £20 – bargain!

We started at the top (which really seemed the best way!) with the camera and although the light wasn’t bright enough for a proper show, the lovely Christine allowed us a free demonstration. There were only around 6 of us (it can be around 20-30 on a normal show) and although the picture projected was pretty dark, it was still fascinating, and having a small group meant getting to try the camera and ask questions. Christine was hilarious, super knowledgable and all-round wonderful, totally worth it!

Also at the top are some pretty amazing views of the city and you could easily while away an hour or two just people watching!

The rest of the floors are great fun. I know I’m almost 24, but I don’t care – it was genuinely a lot of fun to try the games and challenges, from ageing our faces, to taking pictures with shadows or playing with fibre optics. We were super lucky to there at a quiet time – we didn’t have to wait for anything and could play as much as we wanted!

The highlight for me was the mirror maze and the vortex which are on the lower floors. It was definitely a good call to leave these til the end. The vortex is simply a flat bridge where lights move around you, but it’s so disorientating that we could barely walk. Laughing wasn’t helping!

By the gift shop was a very random Marriage Machine which I really wanted to try, but alas, my future husband didn’t get cash out earlier in the day when I suggested!

We spent a while walking down the Royal Mile (poet and I know it), popping in to various little shops along the way. We also found the Childhood Museum which is definitely worth a (free!) visit. Full of old toys, some of which you may recognise, as well as activities for little ones to try. Again, it was fairly quiet when we were there which was great although there were a few families there having a lovely time. There was a doll made from an old shoe that poor children would have played with – very humbling this close to Christmas!

For lunch, we tried The Filling Station which appears to be a Scottish chain that we’d never heard of. We ordered from the lunch menu, a meatball calzone and a chicken caesar wrap, and the menu proclaimed that if the meal took more than 15 minutes it was on the house.

So of course Steven timed it!

It ended up being 21 minutes and Steven mentioned it to the (lovely!) waiter who later came back and confirmed that it was indeed 21 minutes and would be discounted from the bill. We felt a bit mean, although he was really lovely about it, and y’know, it is their policy!

The food was okay. Nothing to write home about as the say – in fact the chips were pretty stingy and there wasn’t a whole lot of chicken in my wrap, but it was alright for a quick bite, especially when we only ended up paying for our (refillable!) drinks.

The Edinburgh Christmas markets were lovely, and there really was loads to see. We were dead lucky with the weather as it was chilly enough to feel festive but warm enough that none of my appendages threatened to drop off. Also, it didn’t rain until we were on the way home – yay!

Obviously we went up to Edinburgh Castle. We decided to go the “scenic route”, up the side of the volcano, as I figured that would be more exciting for Steven to take pictures. It was really hard at times and my poor feet, legs, hips and bum are suffering now, but it really was worth it! Confession time: we didn’t really feel spending like £36 to explore the castle, especially as we knew we had to be heading back home (fairly) soonish, but we did have a look around at the top – and the gift shop!

We found a lovely vintage shop called “Those were the Days” which was full of gorgeous clothes (though doesn’t open until 11am, as apparently a lot of independent shops don’t, so be aware of that) and a super cool place called the Brotique, full of beard care items, leather wallets and artsy books – Steven was in heaven!

On the last night, as we had money on our account from the basket fiasco, we decided to order room service, but not before exploring the leisure facilities!

The pool was beautifully warm (& I’m dead picky when it comes to swimming pools! Can’t stand being cold!) and clean, with only a few people in it. As someone who struggles with a doggy paddle, it got pretty deep but it was rather lovely. We also used the steam room and I managed to stay in there long enough to feel a difference for once – yay me! The sauna was full of loud men so we didn’t bother with that, but the changing facilities were clean and spacious, although I wish we’d have known we’d have needed a quid for the locker! Thankfully, reception leant Steven one as he had actual valuables!

When we got back to our room, and tried to call room service, the phone just rang and rang without an answer. Eventually I decided to use the number on the phone rather than the two in the directory and got connected really quickly to an incredibly friendly guy. We both (as in Steven and I, not me & Mr Hotel!) ordered steak cheese burgers, and Steven got a pint of Stella whilst I ordered a bottle of rosé. Not officially all for me of course.

It was delivered promptly with fancy silver covers like in Beauty and the Beast (which is my frame of reference!) and it was pretty delicious! It felt rebellious eating in bed (which, by the way was incredibly comfortable!) and was at no extra charge so that was pretty great.

Overall it was an amazing trip! Well worth the 4 hour drive and I would love to come back again (but for the Fringe this time?!).