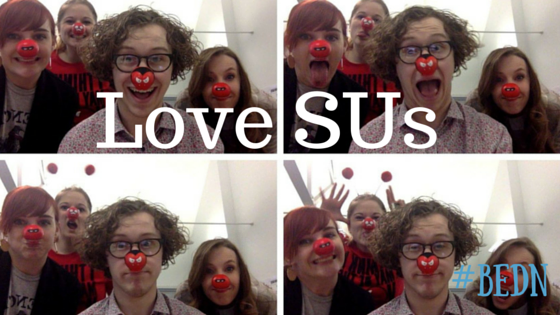 Although I graduated, like, forever ago, and really should let go of student life, when I saw the campaign for #LoveSUs, I just had to weigh in.
Growing up watching rubbish TV, my understanding of ‘The Union’ was that it was a bar and potentially a radio station. Imagine my surprise, then, when 19 year old me rocked up to Edge Hill University (Times Higher University of the Year dontcaknow?!) and found that that wasn’t quite the case.

It wasn’t until I joined the radio in my first year that I became aware of the SU, though still not 100% sure what it was or what they did. Through friends of friends knowing The President, and the radio studio being right next to the Sabbs desks, I began to gain a bit of an understanding. In fact, near the end of my first year, I helped campaign for a friend who wanted to become a Vice President. He didn’t get in. However, it did show me just how little people understood about the SU. This was also the point where I decided that I wanted to run for VP in my third year…

Jump forward to second year and suddenly, I know a bit more about the SU. I volunteer for Freshers’ Team and meet members of staff, I recognise some of their campaigns and keep up with the news on Facebook. Again, I help campaign for a friend who was running for VP. He didn’t get it either. (Sidenote, this is where Steven and I began to spend time together, so technically, the SU helped me meet the love of my life!)

Come third year and one of the VPs is one of my bestest friends, so I spend the summer listening to her exciting plans and learning more about the Union and it’s purpose. I also visited the Advice Centre, when the Uni couldn’t help me and it was a sort of revelation, I began telling everyone about this mystical room where problems were fixed!

I ran for VP feeling pretty terrified. I had an amazing group of friends helping me campaign in every spare moment, and so much support from people that even if I hadn’t won, it still would have been a worthwhile thing. The week was long and emotional and we survived on bacon sandwiches in the morning, and wine at night. It was the most amount of people running in one election and I was up against some ridiculously good candidates. Results night was the most nerve-racking thing and when finally, after a million rounds, it was announced I had won, I cried. A lot. I did an awkward, teary speech, and went home to order £50 worth of Dominoes which I ate in my PJs with my campaign team before heading off to bed.

Results night, and our finl day in office.

It’s a weird thing, to be elected into office in May but not start until August, but I had an amazingly comprehensive (& hilarious) handover document from EmJ, and doing my dissertation helped while away the time.

My actual year in office was one of the weirdest of my life. One day we were partying with Judge Jools and Danny Howard, and the next I’d be sat in a meeting of Very Important People, giving a report. I ran campaigns on sexual consent and donating to Food Banks, and installed a community book shelf. I helped individual students find their voice, and dealt with negative comments on Facebook. I learnt so much about people, myself included, and grew more in that year than I can ever remember doing before. (Emotionally, or spiritually or whatever. I haven’t physically grown since High School…)

Having been ‘on the inside’, I wish I could go back to my first year and shout about the SU. They’re more than just the bar, they’re a team of people working tirelessly to improve your ‘student experience’ (and other buzzwords). It is a fun job, but it’s also incredibly stressful. These people do so much behind the scenes to save funding and lobby the University, replying to students late at night about what to do if they’re failing and putting things into place to ensure everyone is safe, happy and democratically represented. It’s definitely not a 9-5 job!

So to all my friends working in the student movement, in SUs up and down the country (but especially Edge Hill) and to Sabbs old and new – I love you! (Well, most of you. There’s always the odd one…)