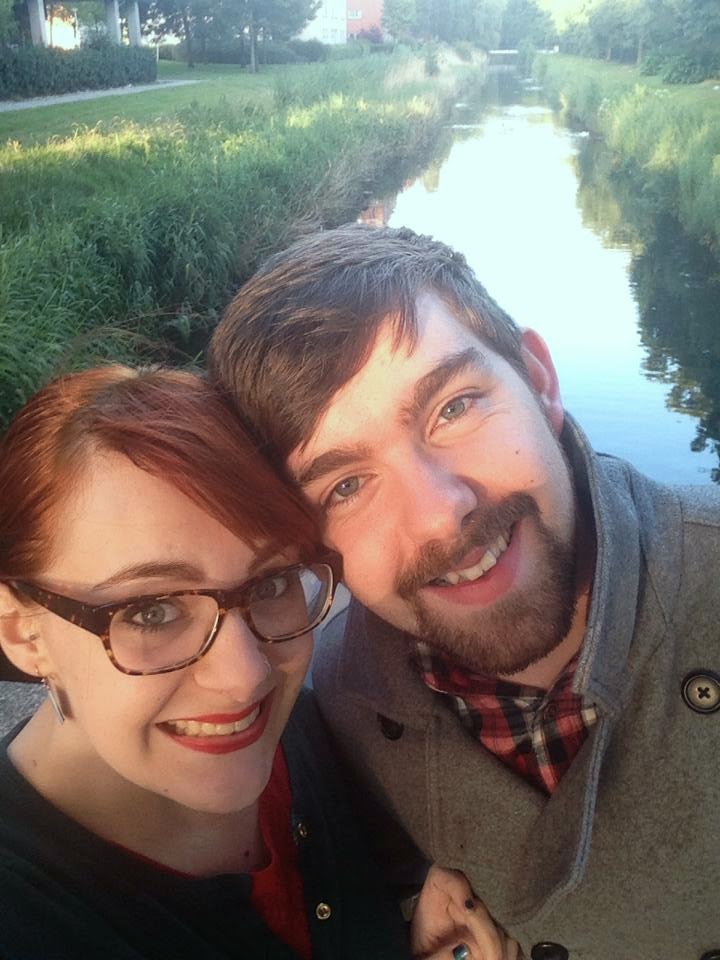 Our most recent trip was a little 2 night break to Amsterdam. We booked in on a whim (as is our style), via a Groupon deal. The actual booking was a bit stressful, as they gave you terrible flight times (getting in at 10pm on your first day, and leaving at 5am on your last day, thus getting no time…) and charging you a sneaky £30 to change them. They also tried to ‘upgrade’ our hotel for free… I’m one for checking reviews (though often not ’til after we’ve arrived at a place, watch out for our Blackpool post for that one!) so I wanted to see how much better this free upgrade was. Well, as much as we love animals, rats in the kitchen didn’t seem much of an ‘upgrade’ so we asked to be downgraded to our original hotel thanks!

We stayed in the Best Western Hotel plus, Blue Square. We weren’t expecting much from it after the booking drama but it was incredible! Clean, friendly, modern. (& the breakfast was to die for!) It was also a really green, eco friendly place, as far as hotels go, so that was an extra few points from us! It was a 25 minute tram ride from the centre, but honestly, riding trams around was one of the best things about Amsterdam for me. It had the convenience of the NYC Tube, but the sight seeing ability of a tour bus. We bought a 3-day travel pass for €16.50 each, which included all trams, buses, trains etc. On the very rare occasions we didn’t have something to do, we jumped on the nearest tram and went for a joy ride, just enjoying looking out the windows and seeing bits of Amsterdam that we may not have seen otherwise. There are a few things I noticed about Amsterdam that surprised me. I assumed a place with (sort of) legal drugs, and a buzzing sex industry may be a bit seedy, and dark, maybe even a little scary. However that was so far from the truth! It was such a beautiful place, with incredibly polite and friendly people. Not friendly like ‘we work for tips’, but just genuinely bloody nice people. We happened to be there on a night when Holland were playing in the World Cup and it was the best atmosphere. Everyone was happy and enjoying the game, sat in the streets watching TVs outside bars and restaurants. There were no fights or the hooliganism that is often attributed to football, it was just a reply celebratory atmosphere.

Another thing was the lack of hustling. In New York there’s always someone asking if you wanna hire a bike, or go to a comedy show, and it gets tedious and a little uncomfortable at times, but Amsterdam, not at all! In fact when we went for a walk around Vondelpark (beautiful! Full of art & people watching opportunities. I recommend it 1000%!) we assumed there would be random people hiring out bikes at every turn, Central Park style, but in fact, we actually found it hard to hire a bike – we had to find somewhere and return the next day. We ended up using the Green Budget Hire Bikes which was pretty cheap and the bikes were reliable. We read on the website it was a passport for deposit but we ended up being asked for €200 too! It was our last day so of course we didn’t have that, so we had to compromise. Biking in the park was wonderful but, as someone who has zero balance, coordination and awareness (as well as appalling eye sight!), it was a little terrifying at times!

Amsterdam has a lot of free wifi! On trains, shops, in the street! Even in the queue for the Anne Frank House – I love free wifi – take note the rest of the world!

Speaking of the Anne Frank House, it is, as I’m sure you assumed, a must see. The queue was about an hour and a half for us, but it’s hard to complain when you remember the story behind the house you are about to enter – 2 hours is nothing! (& you can book online if you know in a few months advance! – The perils of us being so bloody spontaneous!) We were in there for ages because there’s so much to see, read and watch, and, due to the popularity, you end up in a constant, slow-moving queue of other people. We were sadly in a group with a really loud group of American people, about our own age, who found it appropriate to laugh, giggle and flirt loudly when we were in the actual rooms. When we visited the 9/11 memorials in New York I was uncomfortable with their being a ‘gift shop’, and so I was relieved to see that no such thing exists at the Anne Frank House, only a shop of books, which seems far more apt!

On the first night we ate at a little place called Alberto’s in Leidseplein. (Top tip: if you get lost, make your way to leidseplein, or Central, that’s where most of the touristy places are!) They were offering steak for €12.50 and we were celebrating so we gave it a go! The steak came with a big side salad and a plate of fries and was beautiful! It was such a lovely restaurant too! There were loads of places over the week that had all you can eat ribs, so I’m not really sure what that was about, but if you like ribs, you’ll do just fine!

We went to a flea market which was more of a general market with the odd car boot style stall, but great to browse around. Although open til around 5pm, when we got their at 4pm, some were already starting to pack up, so get there in plenty of time! The Ben & Jerry’s shop is worth a look in, even for the decor alone! I got a lovely milkshake, and was feeling amazed, when Steven pointed out, they’d just put the Baked Alaska ice-cream in a blender with some milk – we can totally do that! But for waffles or cones with irresistible B&Js ice cream, it’s a lovely way to cool down and not as over-priced as I would have thought.

We took a ride on the canals with a tour company which seemed a little over-priced for what it was, but I’m glad we did it as we wanted to see the beautiful waters of Amsterdam. Also, it was in the TFiOS movie and so it had to be done!

One of our first stops was the Sex Museum. This was so worth the money as it was huge! There was sculptures and paintings, as well as a huge section of raunchy pictures through the ages. It’s fascinating to see the trends and how things have changed (and how things have always been the same…!). It’s an interesting place because it has the air of a normal museum, where you should take everything seriously, even awkward bowls made of male appendages.. however when you walk up the stairs and a giant model of a vagina queefs at you, it’s hard not to giggle like school children. There are several other museums of this type in the Red Light district and I’m gutted we missed seeing the Museum of Prostitution but will certainly be paying that a visit next time!
The Red Light District is so different to how I had imagined! It just has the atmosphere of a road full of night clubs… Clubs that just so happen to have women in their underwear in the windows. It didn’t feel seedy or unsafe and was an interesting place to visit. The sex trade is very different in Amsterdam. The women are protected and even have to pay tax. By making it legal and regulated it seems a whole lot safer, the exchanges happen in a room, rather than in someone’s car, so there is less chance for anything untoward to happen.
There wasn’t a time in the whole few days, that I felt uncomfortable or intimidated, and for someone who worries as much as me – that’s a big deal!
So, my top tips for Amsterdam:

– Get a travel card and enjoy the trams
– Watch out for bikes, everyone says it and they’re not kidding!
– Book Anne Frank tickets in advance
– Go!